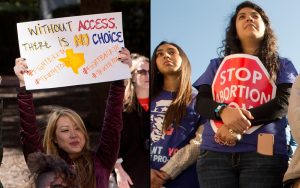 • Sparks issued a temporary restraining order that blocked the rule from going into effect until Jan. 6. He also set a hearing for Jan. 3-4, during which each side would have about five hours to make their cases.

• The regulation, set to be implemented by the Department of State Health Services, would require health care providers to bury or cremate aborted fetuses instead of disposing of them in sanitary landfills. While some medical and funeral advocacy groups claimed it would be a financial and emotional burden for families, anti-abortion groups said incinerating unborn fetuses was cruel. At the Thursday hearing, Texas Assistant Attorney General John Langley said the rules “in no way, in any way, shape or form, regulate women. They only regulate health care facilities.”

• Sparks initially asked the state to delay implementation of the rule voluntarily and appeared frustrated when they declined. “This is the first time … the state of Texas has ever said, ‘We’re going to go ahead,’ when there’s a lawsuit of substance before the United States District Court,” Sparks said. “I’m old. I won’t remember as long, but I’ll remember.”

• The Center for Reproductive Rights, which sued the state over the rule on Monday, hailed the temporary restraining order as a victory. David Brown, senior attorney for the organization, said after the hearing that the state fumbled in its response over the public health benefits of the rule because there wasn’t one.