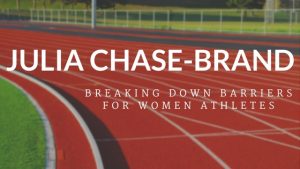 When Julia Chase-Brand was growing up, women didn’t run. Born in 1945 in Groton, Connecticut, Chase recalls being surrounded by four active brothers, in a time where girls couldn’t run, play soccer, and if they were to play basketball, it was at the half court line. Inspired by local distance runner John J. Kelley, Chase started her running career at an early age.

“I think I was the only kid who liked missing the school bus,” Chase wrote. “It meant I could run the mile and a half through back fields and along the salt marsh to get there. It was a giddy feeling of freedom. From the time I was five I loved to run. I was flying.”

In the early 1960s, women weren’t allowed to participate in races that were over 880 yards. Popular opinion of the time deemed distance running harmful to women’s reproductive abilities. But a young Chase loved to run; regularly logging at least 60 miles per week.

Chase’s competed in her first race in July 1960 at age fifteen. She achieved a first place victory at the New England Championship’s 880 yard run, breaking the track record. However, she had to list her hometown as being from Rhode Island, since women from Connecticut were forbidden from competing.

Eager to compete again, Chase registered for the popular 4.7 mile Manchester Road Race held each Thanksgiving in Connecticut — despite the AAU’S sexist ban. However, she notes that she faced pushback upon arriving at the race.

When I showed up for the race, the officials flat out refused to let me run. I looked around and saw 12-year-old boys getting clearance. This didn’t sit right with me. So I returned to school fired up. I registered again for the 1961 race — but this time I’d insist on running.

A year later, the press had caught wind of her act of defiance. She notes that reporters from LIFE, Sports Illustrated, and even international newspapers showed up six weeks before the event to track her progress.

When race day came, Chase recalls feeling exhausted and full of dread, not knowing how bystanders would react to her presence. She arrived in Manchester on race day wearing lipstick and her college gym uniform — a dress. She notes that upon arrival, the reaction was mixed. While some were encouraging, others told her she should return home to cook dinner.

Unexpectedly, Chase found herself in the company of two other women, one an experienced runner who was originally there to see her husband compete, the other a local teenager there to show solidarity. Although the three of them faced resistance from officials, each of them were able to compete in the race.

Upon crossing the finish line, bystanders recall that Chase did cartwheels in the street, and many run towards her to shake her hand and congratulate her. Her time was 33:40, putting her in 128th place, where she finished before 12 men.

Her elation appeared to be short-lived however, as the racing governing body threatened once again to ban her from all competition unless she vowed to stop interrupting “men’s” distance races.

At a competition in 1962, she received another plea to desist competing in distance races, this time from a high ranking female AAU official. While on break at the AAU Track Nationals, after running the indoor 880 the official pleaded, “Listen Julia, just let the distance thing go okay? Don’t rock the boat.”

Chase was upset by the sentiments, wondering why she had the support of so many of her male peers, but severely lacking support from women in her industry. It was a feeling she didn’t understand until nearly fifty years later.

Fifty years later, I’ve come to understand this conversation. Women’s toehold in running was so tentative that many felt we simply shouldn’t risk losing the gains we had just made. Leading women athletic directors exercised extreme caution. Their motto: take it slowly…don’t shake things up.

Unfortunately, Chase’s running career was cut short by an automotive accident a short four years after her monumental achievement at the Manchester Road Race. Little did she know that just a few short years later, Title IX legislation would prohibit sex discrimination in education, and change the face of women’s sports for generations to come.

Chase-Brand went on to earn an advanced degree in Zoology, becoming a part of the team to discover that bats aren’t blind. She is now in her 70s, and continues to run by the ocean several times a week. 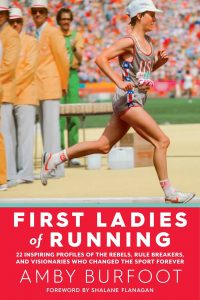