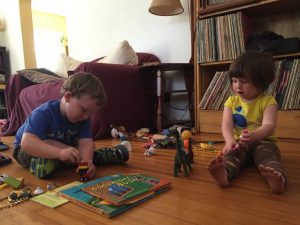 Seamus and Madeline play with their second-hand toys. (WNV/Frida Berrigan)

They keep this “conversation” going for a while before there is a screech and a wail.

“Figure out a way to share it,” I call from the other room.

“Madeline,” says four-year-old Seamus, who puts on a very reasonable and emphatic voice with his two-year-old sister. “I want you to share that with me now.”

On some level, I can’t blame her for saying no. Seamus inflects his “share” with a lot of muscle and possessiveness. They are stuck.

I intervene with the magic of “taking turns.” That means that Seamus asks Madeline every two-and-a-half seconds if she is done and ready to give him a turn. This goes on until Madeline loses interest (three minutes later).

“Here,” she says, handing it over.

“That is my book,” Madeline asserts.

We have tried to replace “mine” with “ours.” That works sometimes, but mostly they just screech “ours,” as they are playing tug of war with the beloved and coveted object. We tell them that everything in this house is “everybody’s,” and if they can’t take turns, or play together, then we can’t have all these toys. They don’t really believe that we will take all of the toys away.

And, even when they play nicely together, they are terrible at cleaning up. Last night, they played with Legos, which basically meant they took Legos and sprinkled the foot-destroying plastic bits all over the living room. Then they finished that game and moved onto playdough, so that bits of soft blue playdough were smooshed all over the floor amongst the Legos. We gave up — we didn’t even try to get them to help clean up that disaster zone. They went up to take their bath, and I turned the music up and put it all away — way away, like no Legos for a while (until they are eight and six, maybe).

This morning, Seamus said to me “I have to clean up all the Legos, don’t I, Mom?”

“Nope, I cleaned it all up last night.”

“Wow, you must have stayed up all night, Mom!” His voice was full of wonder. I love it when he finds me amazing.

“Yup, and now I am very tired, and you are not going to play with Legos for a while.”

We took a hike together last week. All three kids ran ahead of us — my stepdaughter Rosena, who is nine, led the way. They looked at mushrooms, found walking sticks (they kept upgrading their gear with bigger and bigger sticks), talked about Gandalf and Zootopia’s Judy Hops, picked up rocks, noticed flowers, repeatedly misidentified poison ivy, swatted at mosquitos, complained, asked for snacks, water and piggy back rides. There were no stuffed animals or plastic figurines tagging along on this excursion. There was no epic battle at clean up time. It was a reprieve from the Mine Wars and it got me thinking about toys. Maybe we don’t need to have any anymore.

I read a beautiful essay online called “The Boy With No Toys,” by Laura Grace Weldon. This boy plays and explores and has fun. He helps his mom cook and do chores and is curious and self-directed at a young age. He builds, makes things, and plays the harmonica and the fiddle. He misses out on very little by not having playthings. Weldon likens Will’s childhood today to the simpler childhoods of today’s grandparents and great grandparents. They didn’t have play rooms full of toys, she notes. “Play is vital to development,” Weldon writes. “It’s has everything to do with autonomy, exploration, imagination and fun. It has very little to do with purchased playthings. In fact, structured programs and commercial toys actually tend to co-opt play.”

That was enough for me. I was ready to chuck our whole lot of toys based on that paragraph alone. But then I realized our toys are mostly hand-me-downs anyway. From parents with older kids, we got a whole kitchen set up with wooden food products. But at this point, they would rather help us cook real food than sauté wooden onions. Seamus and Madeline took turns (without being reminded) handing me the eggs for our breakfast this morning, and then each beat them with a fork for a little while. Madeline still was shocked — shocked, I say — when there was an omelet on her breakfast plate. “I don’t want eggs!” she wailed. Seamus ate part of her serving. And the rest is still sitting here on the table waiting for lunch.

Someone gave them five mini-American Girl dolls with the tiniest little knee-high socks. The kids love these dolls and keep really good track of them, which is good because I eventually found out that they cost $28.00 a piece when they were new. The toys that we do buy come from the Saint James Jumble downtown. We walk there occasionally on a Saturday morning and give each kid 50 cents and tell them they can buy whatever they want. Fifty cents — you can’t even buy a gum ball most places for that much — goes pretty far at the Jumble. That’s where all our toy cars came from, including our impressive collection of hard plastic animals that are always lurking and hoping to catch adult feet in a crippling jab step.

My son has been talking about Toys “R” Us recently. He describes it in the hushed, worshipful tones usually reserved for holy places. One of his school mates has described in great detail all the wonders and joys available for purchase. Seamus has retained every detail and regales me with the benefits of going to Toys “R” Us whenever there is a discussion about what to do next. It is the lag time between the end of camp and the beginning of school, so there is a lot of that what-to-do-next conversation — and he says: “Oh, Mom! I know! We could go to Toys “R” Us. They have toys there!”

Now, would you believe me if I told you that I had never been to Toys “R” Us except to go to the bathroom at their flagship store in Times Square during demonstrations at the nearby military recruiting center? It’s true. They had very nice bathrooms and were listed in my friend Vicki Rovere’s book “Where to Go When You Have to Go in Manhattan.”

And so, it’s summer. My son wants to go to Toys “R” Us. And so, we went. Madeline was asleep. Seamus was in an ecstasy of anticipation, and I was gripped with a trepidation bordering on paranoia. I was terrified that I would be unable to leave the store without buying one of everything. I thought that maybe I have been keeping my inner consumer at bay only by the power of non-proximity, and now that I am here, she will be unleashed like a gremlin who can never be subdued again.

I should not have been so worried. The rigid gender line that ran down the center of the store turned my stomach. It is not a new observation, and there is a whole other toy industry committed to righting this wrong. But come on! Toys “R” Us doesn’t sell bikes, or balls, or backpacks — you had to choose “girl” ones with pink ponies, glitter and rhinestones or a “boy” one with monsters, grimacing super heroes and claws. My other big observation also sounds rube-ish. But here it is: just about every object in the store had a movie or video tie-in. There was no playdough, there is Play-Doh, gendered and cross-marketed with other toys: so kids choose between Star Wars Play-Doh or Play-Doh Sweet Shoppe. There were these cool looking dinosaurs that Seamus was interested in because the display included clips from the Dreamworks-developed show that is now streaming on Netflix, which goes to explain why these plastic objects are $25.99 each.

The message I got from all of this is “Hey kid, your imagination is not enough. Stick to the script. There are rules for these toys. There are objects for girls and objects for boys. Pick your side and play your part.” In the bright, freezing cold cavern of the greatest toy store on earth, I felt so protective of my kids. The rich interior lives of my kids were under assault, in danger of being colonized and coopted by Teenage Mutant Ninja Turtles, Jedi Knights, Barbie Veterinarians, My Little Pony and worse.

God, now I sound like one of those Luddite moms who never lets her kids watch a show. Let me climb down from my soap box and confess that some of the most satisfying moments of my week are when I let them watch the PBS kids show Super Why. I know where they are, I know they are not drawing on themselves with Sharpies or building castles out of all our music CDs (yep, I guess I am a Luddite, since we still listen to music on CDs). I know they will sit perfectly still and almost unblinking in front of the television. They will breath more shallowly, their heart rates will slow, and they will almost hibernate in front of what my dad called the boob-tube. I can get so much done in the half-hour or (I admit) hour-and-a-half they are in power-down mode.

So, I am not a parental purist. But, as I walked through the toy store that day, I kept thinking about imagination and wanting to protect and preserve it for my kids. It is more than just good for their development. It is a critical resource for our planet. This powerful mental capacity to see something that isn’t there — it is what makes us human.

We need to be able to envision a new reality over the rim of the present. It keeps us going, doesn’t it? Imagination is the antidote to fear. The light in the darkness. The song in our hearts. The impulse that compels us to reach out to another person. The conviction that what is is not enough, that there is a future worth fighting for.

Think of the resonate movements of our time: A New World is Possible. Black Lives Matter. Women Hold Up Half the Sky. They are more than politics; they are poetry, magical thinking, wonder. It is powerful stuff, and it begins with our children having time and space to create, connect and resist (yes, even resist — but not at clean up time). I am not leaving it to Hasbro and Disney and Mattel. I am cleaning out the toy chest (and the toy shelf, and the toy baskets, and the toy area in the attic) and making more room for imagination — and imagining an end to the Mine Wars.

Back at the Toys “R” Us, Madeline woke up early from her nap. They looked, they ooh-ed and ahh-ed, and they ran up and down the aisles exclaiming and chattering. They loved everything. But they couldn’t play with things the way they could at Goodwill or the Jumble. Everything was triple wrapped in plastic, cardboard and cellophane. I was able to get them out of there after about 45 minutes of wandering around. I should not have been so worried about buying the whole store. They didn’t even want that much. I bought Madeline a baby mermaid for $3 and Seamus a Frozen tiara for $1. And I bought us a bag of peanut M&M’s, to share.