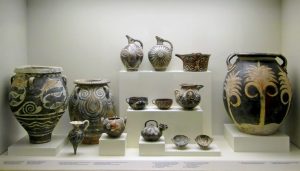 Kamares ware helps us map the trading relationships of the Minoans with the Mediterranean at large.

Look closely at the jug on the top shelf at the far left in the photograph above. Can you almost see a bird looking up to the sky? 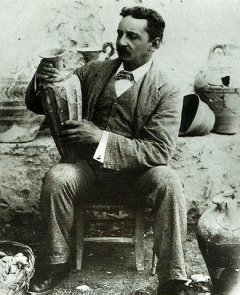 The pottery we see in this photograph is called Kamares Ware, and it was the first fine, mass-produced and widely-traded pottery produced on Minoan Crete, dating to the Middle Minoan era (1900-1700 B.C.E.). It was Sir Arthur Evans, the archaeologist who first uncovered the Minoan palace at Knossos, who divided Minoan chronology into different periods and it was Evans who was also responsible for using the name “Minoan” to refer to the Bronze Age culture of Crete (after the legendary King Minos). Minoan culture flourished between c. 2600 and c. 1600 B.C.E. The Kamares cave, discovered in 1864, is the location of a Minoan archaeological site on Crete, and some of the best examples of Middle Minoan pottery have been found there—hence the name Kamares ware.

Kamares ware is characterized by light-on-dark abstract and floral patterns and elegant shapes. The crafting of these shapes was executed on a fast-spinning potter’s wheel, a new invention during the Middle Minoan era, and its painted decoration is particularly labor intensive, requiring a dark background color, usually black, on which white and sometimes red and orange colors were added. This was a departure from earlier Early Minoan pottery which merely added dark abstract designs to the buff background color of the clay. Perhaps the most remarkable type of Kamares ware is referred to as eggshell ware, named for the extreme thinness of the vessel walls. The overall effect of Kamares ware is not just a pretty pot but an object which is a wonder to behold—at once inventive, delicate, and full of movement and charm. 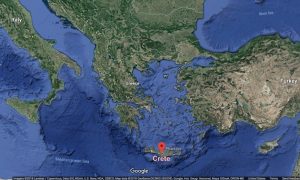 This Kamares ware jug is a classic example of the type. It was found at the Minoan palace of Phaistos, which is in south central Crete. Phaistos and its sister palace Knossos to the north were the two main manufacturing centers for Kamares-ware pottery in the middle Bronze Age.

The vessel is painted with a black background and most of the abstract decoration is painted in either white or red. The belly of the jug, its broadest circumference, is where the main action of the design takes place: two abstract shapes, an “S” shaped double spiral and a striped oval shape alternate like beads on a string. Each is connected to the other by a white line which seems to expand and contract with the pull of the double spiral. The oval shapes are grounded in the composition with white triangles, under which is a succession of smaller triangles angled to the left. A red stripe separates the neck of the jug from its body and the spout and handle are striped. 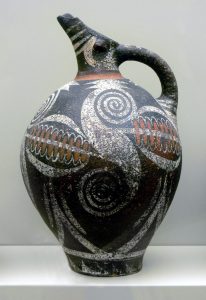 At first glance, the shape of the jug is simple but when you begin to understand the painting, you realize that it is a zoomorphic shape, meant to imitate an animal, in this case, a bird with its beak in the air and a striped plume emerging from the top of its head (the handle). With this, the jug has a dual reading: it can be seen as a bulbous sphere with alternating swirling spheres, or a proud bird, looking up to the sky and contemplating flight.

Probably the most important thing about Kamares ware is how it helps us map the trading relationships of the Minoans with the Mediterranean at large. Kamares ware pottery has been found in Egypt, the Levant, the Cycladic islands, mainland Greece, and southern Italy. In this, it is the first true marker of Bronze Age Crete’s economic reach.