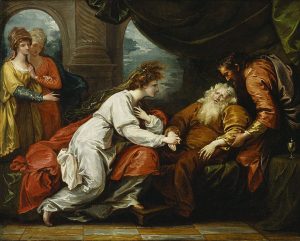 Considering how the Fool and Poor Tom, two characters in King Lear who stand outside the social order, enhance the play’s investigation of madness, civilisation and humanity.

King Lear stages a total breakdown in civilisation. This is a tragedy in which all the values that we think of as protecting our sense of humanity are attacked: children turn on their parents, the elderly are tortured, brother hunts brother, and sister murders sister. As the social, ethical and familial bonds between people are severed, individuals lose their sense of self and go mad. The play centres on an old king who loses his kingdom, his daughters and his mind. Madness was a familiar theme in Renaissance theatre, though in many other plays characters merely pretend to go mad (think of Hamlet) or are wrongly taken as being mad (The Comedy of Errors). On the stage and in society, ‘madness’ defined a wide range of ‘inappropriate’ behaviour that was not necessarily caused by clinical insanity as we would understand it today. Disordered clothing, socially unacceptable gestures, and scrambled speech all might label a person ‘mad’. King Lear explores different forms of such ‘madness’ in its representations of the ageing Lear, his Fool and the disguised ‘Poor Tom’. Questioning the nature of madness is part of the tragedy’s larger investigation into what constitutes humanity.

Like those described as ‘mad’, real-life and theatrical Fools stood apart from the Renaissance social order. Royal and noble households often employed Fools for recreation. Sometimes these figures were what was known as ‘naturals’: mentally disabled people whose inability to adopt sophisticated social conventions was regarded as humorous. Other Fools were professional entertainers who wittingly and wittily mocked courtly society. Lear’s Fool could be either of these types and he has been performed as knowing in some productions and ‘natural’ in others – and as numerous types in-between. Such varied interpretations are possible because the Fool’s part is different in the two early editions of King Lear, so that in the Folio text (1623) he appears more consciously satirical than in the Quarto (1608). However, the very concept and nature of the Fool is itself slippery, and so it is not surprising that this character should have proved so difficult to pin down. The whole point of a Fool is that he doesn’t behave or speak like other people; this makes it hard to account for him in normal terms. Lear’s Fool calls the king ‘nuncle’ and is addressed as ‘boy’, perhaps suggesting the kind of innocence associated with the ‘natural’ Fool; however, he also calls Lear ‘my boy’ (1.4.137) and it is possible to read the generational language as satiric irony. Either way, the part provides an alternative perspective on the king’s behaviour, one that isn’t bound by the political deference to which other courtiers are expected to conform. His is a privileged role in a play where characters who speak to the king with honesty instead of self-interested flattery are cast out (compare Cordelia and her sisters). 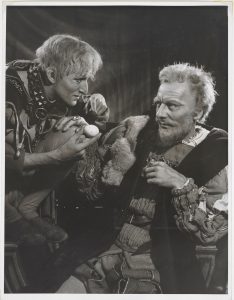 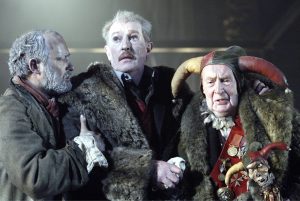 [LEFT]: Alan Badell as the Fool and John Gielgud as Lear at the Shakespeare Memorial Theatre (1950) / British Library, Public Domain
[RIGHT]: Louis Hilyer as Earl of Kent, Corin Redgrave as King Lear, John Normington as the Fool, in the RSC’s 2004 production. / Photo by Donald Cooper, Photostage

When the Fool breaks into song in Act 1, Scene 4, he fulfils some of his entertaining purpose. The melody for his song may survive in the 17th-century manuscript music that has been written onto the British Library’s copy of Pammelia, Musicks Miscellanie (1609).[1] Two staves running across the bottom of two pages at the start of the book (sigs. A1v–A2r) are accompanied by the lyrics: ‘Late as I waked out of sleepe I harde a pretty thinge some men for suddaine ioy do weepe, and some for sorrow sing fa la la’ (my emphasis). These words also feature in Shakespeare’s song:

Tuneful as these sentiments may be, the Fool’s language sharply critiques the king’s behaviour. In this song those who weep in happiness are the ‘daughters’ that the Fool claims Lear has turned into ‘thy mothers’ (1.4.173); by contrast, the Fool sings in ‘sorrow’ that Lear has handed over authority to his children. He vividly figures Lear as putting ‘down’ his ‘breeches’ so that his mother-daughters may use ‘the rod’ on him (1.4.174). To lecture the king is to invert firm social hierarchies, but the Fool’s image suggests that Lear himself is responsible for creating disorder by promoting his daughters above their king and father. The Fool provides a choric commentary no one else is allowed to speak (Kent is banished in the first scene for attempting to counsel Lear; he can return only in disguise). As Lear’s court breaks down it becomes appropriate that a Fool should outline the situation: his topsy-turvy language suits the political and moral chaos. 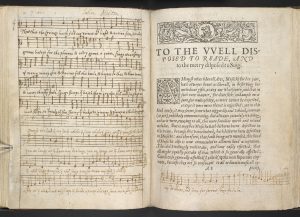 The Fool’s song from King Lear, a 17th century music manuscript: ‘Some men for sudden joy do weep, and some for sorrow sing.’ / British Library, Creative Commons

Lear himself also finds glimmers of self-awareness when talking to the Fool. It is to the Fool that Lear speaks his fears that he is sliding into madness: ‘O, let me not be mad, not mad, sweet heaven! / Keep me in temper, I would not be mad!’ (1.5.46–47); ‘O Fool, I shall go mad!’ (1.4.286). Unlike Shakespeare’s other tragic protagonists, Lear has no soliloquies, no moments to reflect privately on his state of mind and on the action of the play. The Fool provides a means for Lear to use a more intimate and unguarded voice. By interacting with Lear, the Fool (whose disorderliness is functional) helps to calibrate both the emotional confusion of the king and the growing madness of his court. Somewhat weirdly, the Fool disappears halfway through the play, exiting the stage for the final time in Act 3, Scene 6. His unexplained absence is apt since he exists outside the proper order of things.

The Fool’s function is ultimately taken over by ‘Poor Tom’, a still more radically disordered role, and a fractured mirror for Lear himself. Framed by his brother Edmund for the attempted murder of his father Gloucester, Edgar has to hide himself. In taking on the disguise of the beggar Poor Tom, Edgar sheds his noble identity: ‘Edgar I nothing am’ (2.3.21). His new role is literally stripped down since Poor Tom is totally exposed in his ‘presented nakedness’ (2.3.11). By acting as a ‘Bedlam beggar’ (2.3.14) Edgar behaves like one of the ‘Abraham Men’ who pretended to have come from Bethlem Hospital near Bishopsgate in London, an institution for the mad. Thomas Dekker’s pamphlet The Belman of London (1608) includes a description of such fraudsters in its catalogue of criminals and con-tricks. Such men go ‘halfe naked’, ‘talke frantickly of purpose’, have ‘pinnes stuck in sundrie places’ of their ‘naked flesh’, and go ‘by the name of Poore Tom’, crying out ‘Poore Tom is a colde’ whenever anyone comes near (sig. D3r–v). Shakespeare’s Poor Tom fits this description exactly, right down to the shivering refrain: ‘Tom’s a-cold’ (3.4.58, 3.4.83, 3.4.147, 3.4.173, 4.2.52). And yet while Dekker’s ‘Abraham Man’ is a ‘rascall’ who feigns madness to cheat money, food and sex out of the gullible, Edgar is forced into the disguise because of the malevolence of his brother and, more broadly, because of the increasing cruelty of the play’s social world. Part of the tragedy of King Lear is not so much that there are fraudsters who pretend to be mad to secure charity, but that society has left little other option. 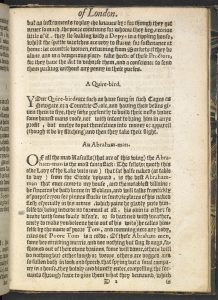 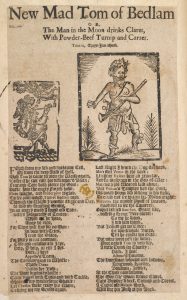 If madness involves a loss of self as identity becomes incoherent, Edgar’s disguise is a form of madness. He plays Poor Tom as a demonically possessed beggar in conversation with devils: ‘Frateretto calls me, and tells me Nero is an angler in the lake of darkness’ (3.6.6–7). Shakespeare took the names of Poor Tom’s demons from Samuel Harsnett’s Declaration of Egregious Popish Impostures (1603), which was published just two to three years before Lear was written. The Declaration is sectarian propaganda: an exposé on a series of exorcisms performed by Jesuit priests at a house in Buckinghamshire in the 1580s. Where Catholic accounts had described the exorcisms as miraculous, the Protestant Harsnett insisted that they were faked. His satirical tone maintains an amused revulsion for the Jesuit exorcists: he repeatedly describes them in theatrical terms (as ‘maskers’ rather than miracle workers), and implies their interest in the young demoniacs’ bodies was sexual rather than spiritual. But while Poor Tom’s uncanny language borrows much of Harsnett’s imagery, the tone of Shakespeare’s tragic play is very different from the mocking Declaration.[2] 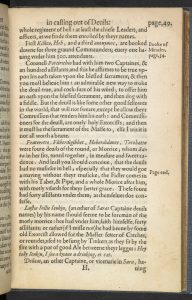 A Declaration of Egregious Popish Impostures by Samuel Harsnett, 1603: Shakespeare borrowed many words and phrases for King Lear from this work, including the names of the devils tormenting Poor Tom / British Library, Public Domain

Edgar may well be playing a part, but it is a part that allows him to speak his true pain. As Edgar, he tells only the audience that he has ‘Escap’d the hunt’ (2.3.3) set on him by his father; as Poor Tom, he can roar to the king: ‘the foul fiend follows me!’ (3.4.46). His disguise is peculiarly multiple: the actor playing this role is Edgar and Poor Tom and the devils possessing Poor Tom. This fracturing of identity into different parts is evident as Poor Tom’s language slips into different voices: ‘Beware my follower. Peace, Smulkin, peace, thou fiend!’ (3.4.140–41). The Fool’s privileged voice enabled him to critique the king. But Poor Tom’s language is so madly and maddeningly open in its address that it too might be describing Lear or even the audience, as well as Edgar and Poor Tom. Perhaps everyone is guilty of being: ‘False of heart, light of ear, bloody of hand; hog in sloth, fox in stealth, wolf in greediness, dog in madness, lion in prey’ (3.4.92–94). Certainly, Lear looks on Poor Tom and sees ‘the thing itself’ (3.4.106). To Lear, this ‘mad’ mixture of (real and pretended) human, animal and demoniac qualities is what constitutes humanity. Poor Tom’s mad display helps Lear to recognise the human value of the most vulnerable. Moments later Lear tears off his own clothes and seems finally to have sunk into the madness he feared. On stage, the actor’s naked flesh confronts the audience with the frailty of the human body. Through Lear’s madness, and through Edgar’s pretence of madness, the tragedy insists on a common humanity. 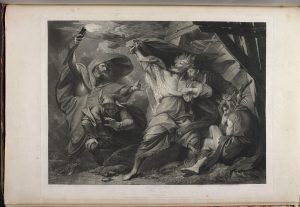 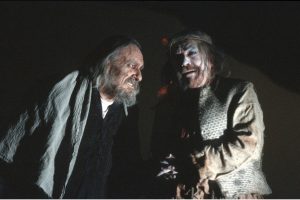