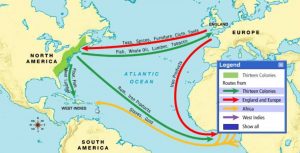 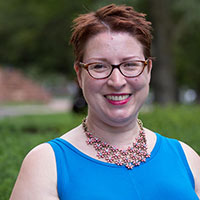 When textbooks discuss colonial labor practices, they most often associate the concept of labor with male work done outside the physical boundaries of the home—in fields; on docks; in warehouses; on ships. Labor is associated with creating goods for market, allowing men to participate in the “triangle trade”—a network of trade relationships in which raw materials flowed from the Americas to Europe, manufactured goods moved from Europe to Africa, and enslaved Africans were shipped back to the Americas.

Yet this framing oversimplifies the complex history of labor in colonial America. It overlooks female labor as central, not peripheral, to the survival of familial and colonial economies alike. It ignores the fact that different patterns of labor existed in Native communities, and that non-Native opinions of Native labor practices influenced colonial Indian policy. It also oversimplifies the complex web of international trade relationships that wove together the Atlantic world. Commodities never flowed in one direction; goods, people, and services might depart from, and end their journey at, any number of Atlantic world ports.

In the western contemporary world we are used to thinking of work as something done for wages outside the home. This distinction did not hold for the vast majority of laborers in colonial America. Colonial America was overwhelmingly rural, and North or South, households were made up of a dwelling place for a family (which often included servants and slaves), a garden, shelter for livestock, and fields for crops. While it was rarely their primary responsibility, many free women worked in the fields alongside their husbands, fathers, and brothers, as well as the household’s male and female indentured servants or slaves. Some of the raw materials produced outside the walls of the family’s dwelling place might go to market, but most came back into the home to be turned into clothing or food, or perhaps bartered for services with neighbors.

Female labor stretched these raw materials into objects of greater economic value. Flax and wool might be turned into thread or yarn, woven into cloth, and turned into clothing (see Primary Source Massachusetts Law on Spinning [1655]). Even when manufactured cloth was available, it was a woman’s job to transform that fabric into wearable trousers, skirts, shirts, and coats.

A colonial wife might make her own soap—boiled from fat and lye—and she was always responsible for washing clothes and bedding. Herbs grown in a garden or gathered locally constituted the basic materials for healthcare, and healing the sick was an overwhelmingly female task. Food came into the home in its raw form. It was female labor that turned wheat into bread, milk into butter, grain into beer, and meat into bacon. With few options for the long-term preservation of food, the survival of households through long winters depended on women’s work in stocking root cellars, drying fruit, and salting meat. All of this labor enabled work outside the household to continue. Colonial bodies owed their function to the women who fed, clothed, washed, and healed them (see Primary Source Letter from Abigail Adams to John Adams [1776]). This labor was arduous; it was often done under duress, or compelled of those who did not have the freedom to refuse. It was the glue that held society together.

That most men and women worked side by side did not mean they did the same tasks; that slaves and servants often worked beside those who could compel their labor did not mean all work had equal social value. Labor in colonial America was deeply gendered and racialized.

Beyond custom and culture, one of the primary mechanisms by which labor gained its racial and gendered character was marriage. Upon marriage, a wife’s legal identity was subsumed beneath that of her husband’s. Except where protected by legal trusts, which were rare, any property a woman owned before marriage became her husband’s once they wed. Legally, a woman could not control her own earnings, sue, make a contract, vote, sit on a jury, or be called into the militia—she depended upon her husband to do all these things on her behalf. This meant legislatures were male spaces, and only men could be lawyers, judges, or soldiers.

Women’s property, labor, and earnings offered a very real and meaningful economic foundation to men’s dealings in business and law. This reflected the fact that marriage was not, for the vast majority of the colonial period, about love or affection, but was instead a contract for the exchange of economic services in a husband and wife’s lifetime. Legal separations—also rare—were known as separations from bed and board, and thus explicitly recognized the economic roles of husbands (who provided shelter) and wives (who governed food).

Yet not all individuals could marry. Slaves and indentured servants were judged legally incapable of consent because their bodies and labor belonged to someone else. This prevented them from legally creating families and controlling the labor of those to whom they were related (see Primary Source Advertisement for Slave Sale, Charleston, SC [1760]). Their labor could be compelled by cruelty, and enslaved women could be required to undertake work—plowing, cutting cane, and wading in rice fields, at risk for waterborne disease—that few white women would be expected to do.

Many textbooks marginalize the history of American Indian communities in this period, noting their presence only in times of war. Violence did occur; pitched battles were fought over land ownership and in defense of ways of life threatened by European settlers and disease. Yet there were many more neutral encounters between Native and non-Native people than textbooks would have us believe. In those encounters, many non-Native individuals were exposed to different ways of organizing labor—women as farmers, for example, and men who hunted to provide a family’s sustenance, rather than for sport (see Primary Source John White, The Indian Village of Secoton [1585-86]).

These practices frequently baffled Europeans who, armed with a need to defend their tenancy on lands that did not belong to them, often used them as evidence of Indian people’s lack of “civilization.” It quickly became a trope that Native women were drudges, that men were wasteful, and worse, beggars.

These misapprehensions about some Native systems of labor organization fed into European settlers’ own sense of racial superiority. It is important to understand that labor was not only about meeting the everyday needs of a family, or supplying a region’s long-term economic health. It could also become the means by which people understood or misunderstood each other, and was used by settlers as a justification for land dispossession and violent confrontation.

All this labor was tied to international trade. Most colonists headed to North America in the hopes of exploiting economic opportunity; slaves and indentured servants left, or were forced from, their homes in service of economic development. Fed and clothed thanks to female labor, colonists—and those whose labor they compelled—often created surpluses of raw materials that could be shipped outside their immediate locale. This trade was not neat, or triangular.

Raw materials were exchanged between colonies in the North and colonies in the South; ships took materials from Massachusetts to the West Indies as much as to England. African slaves were shipped to the Americas (see Primary Source John Barbot, A Description of the Coasts of North and South-Guinea[1732]), but raw materials were shipped back to Europe from the same ports, and ships might specialize in a particular route, or in carrying certain commodities rather than others. This created a web of trade networks that crisscrossed the Atlantic Ocean, globalizing the nature of labor on even the smallest farm.

Textbooks, in addition to their analysis of the shifting dynamics of slave labor in America, the raw materials absorbed by empires, and the effect of taxation upon colonial infrastructure, owe us a more complex consideration of who labored in the colonies, where, how, and why. Women’s labor must be understood as a vital component of each colony’s economic health, and the legal structures that maintained gendered and racial divisions of labor should be more deeply explored. The labor patterns of American Indian communities should be studied for their own sake, and European opinions of the same weighed for their influence on diplomatic and military action. To do so is to more equitably assess the work of men and women, enslaved and free, colonists and Native communities alike.