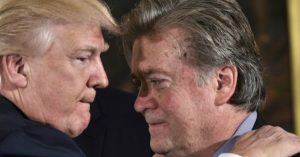 “If you’re still trying to convince yourself that a 21st century coup is not underway, please, please snap out of it,” says Michael Moore

President Donald Trump, chief strategist Steve Bannon, senior policy adviser Stephen Miller, and a select few others are consolidating significant power in the White House, observers warn—setting the stage for what some describe as a coup d’état.

As evidence, many are pointing to the weekend’s news that former Breitbart News chair Bannon had been appointed to the National Security Council’s (NSC) “principals committee”—while the director of national intelligence as well as the chairman of the Joint Chiefs of Staff were demoted to attend NSC meetings only on an as-needed basis.

That move, “politicizing the process for national security decisions, suggests Mr. Bannon is positioning himself not merely as a Svengali but as the de facto president,” the New York Times wrote in a damning editorial published in Tuesday’s paper.

As his first week in office amply demonstrated, Mr. Trump has no grounding in national security decision making, no sophistication in governance, and little apparent grasp of what it takes to lead a great diverse nation. He needs to hear from experienced officials, like [Joint Chiefs chairman] General [Joseph] Dunford. But Mr. Bannon has positioned himself, along with Mr. Trump’s son-in-law, Jared Kushner, as the president’s most trusted aide, shutting out other voices that might offer alternative views. He is now reportedly eclipsing the national security adviser, retired Lt. Gen. Michael Flynn.

There’s also Friday’s highly controversial immigration order, reportedly penned in large part by Bannon and Miller; the slew of firings and resignations at several federal agencies in recent days; and White House press secretary Sean Spicer’s veiled threat on Monday that State Department officials who disagree with Trump’s Muslim ban or other orders “should either get with the program or they can go.”

Meanwhile, Foreign Policy cites “an intelligence official who asked not to be named out of fear of retribution” in reporting that when it comes to national security—even before the weekend’s order—”Bannon was calling the shots and doing so with little to no input from the National Security Council staff.”

“He is running a cabal, almost like a shadow NSC,” the official said of Bannon. According to Foreign Policy, the official “described a work environment where there is little appetite for dissenting opinions, shockingly no paper trail of what’s being discussed and agreed upon at meetings, and no guidance or encouragement so far from above about how the National Security Council staff should be organized.”

[T]here is an effort to crack down on leaking. Last week, a draft executive order, which raised the prospect of bringing back CIA “black sites” and reopening the debate on torture, leaked to the press. White House press secretary Sean Spicer said it was “not a White House document” and that he had “no idea where it came from.” But according to the New York Times, “the White House had circulated it among National Security Council staff members for review on Tuesday morning.” The Times was even provided with the details of the email chain that showed “the draft order’s movements through the White House bureaucracy.”

“They’re doing a witch hunt now to find out how that got out,” the intelligence official said. “There is zero room for dissenting opinion.”

Linking to the New York Times editorial early Tuesday morning, filmmaker and Trump resister Michael Moore wrote online: “If you’re still trying to convince yourself that a 21st century coup is not underway, please, please snap out of it.”

Others posited similar arguments in essays and tweets online:

To review: Trump is either firing or sidelining the top officials (military, State, AG, ICE) who might stand in the way of Bannonite chaos.

“The regime’s main organizational goal right now is to transfer all effective power to a tight inner circle, eliminating any possible checks from either the federal bureaucracy, Congress, or the courts,” commentator Yonatan Zunger wrote in a widely shared piece on Medium. “Departments are being reorganized or purged to effect this…The inner circle is actively probing the means by which they can seize unchallenged power.”