Ishtar (on right) comes to Sargon, who would later become one of the great kings of Mesopotamia. Edwin J. Prittie, The story of the greatest nations, 1913

Love, it is said, is a battlefield, and it was no more so than for the first goddess of love andwar, Ishtar. 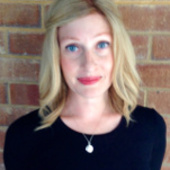 As singer Pat Benatar once noted, love is a battlefield. Such use of military words to express intimate, affectionate emotions is likely related to love’s capacity to bruise and confuse. 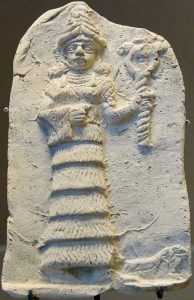 Ishtar holding a symbol of leadership. Terracotta relief, early 2nd millennium BC. From Eshnunna. Held in the Louvre. Marie-Lan Nguyen, CC BY

So it was with the world’s first goddess of love and war, Ishtar, and her lover Tammuz. In ancient Mesopotamia – roughly corresponding to modern Iraq, parts of Iran, Syria, Kuwait and Turkey – love was a powerful force, capable of upending earthly order and producing sharp changes in status.

From Aphrodite to Wonder Woman, we continue to be fascinated by powerful female protagonists, an interest that can be traced back to our earliest written records. Ishtar (the word comes from the Akkadian language; she was known as Inanna in Sumerian) was the first deity for which we have written evidence. She was closely related to romantic love, but also familial love, the loving bonds between communities, and sexual love.

She was also a warrior deity with a potent capacity for vengeance, as her lover would find out. These seemingly opposing personalities have raised scholarly eyebrows both ancient and modern. Ishtar is a love deity who is terrifying on the battlefield. Her beauty is the subject of love poetry, and her rage likened to a destructive storm. But in her capacity to shape destinies and fortunes, they are two sides of the same coin.

The earliest poems to Ishtar were written by Enheduanna — the world’s first individually identified author. Enheduanna (circa 2300 BCE) is generally considered to have been an historical figure living in Ur, one of the world’s oldest urban centres. She was a priestess to the moon god and the daughter of Sargon of Akkad (“Sargon the Great”), the first ruler to unite northern and southern Mesopotamia and found the powerful Akkadian empire.

The sources for Enheduanna’s life and career are historical, literary and archaeological: she commissioned an alabaster relief, the Disk of Enheduanna, which is inscribed with her dedication. 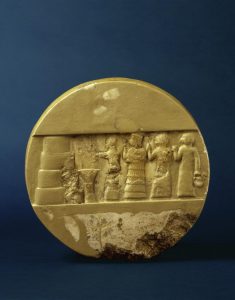 The Disk of Enheduanna. Object B16665. Courtesy of the Penn Museum

In her poetry, Enheduanna reveals the diversity of Ishtar, including her superlative capacity for armed conflict and her ability to bring about abrupt changes in status and fortune. This ability was well suited to a goddess of love and war — both areas where swift reversals can take place, utterly changing the state of play.

On the battlefield, the goddess’s ability to fix fates ensured victory. In love magic, Ishtar’s power could alter romantic fortunes. In ancient love charms, her influence was invoked to win, or indeed, capture, the heart (and other body parts) of a desired lover.

Ishtar is described (by herself in love poems, and by others) as a beautiful, young woman. Her lover, Tammuz, compliments her on the beauty of her eyes, a seemingly timeless form of flattery, with a literary history stretching back to around 2100 BCE. Ishtar and Tammuz are the protagonists of one of the world’s first love stories. In love poetry telling of their courtship, the two have a very affectionate relationship. But like many great love stories, their union ends tragically. 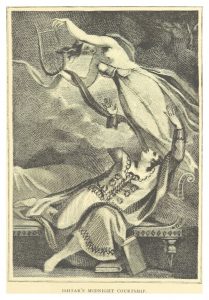 Ishtar’s Midnight Courtship, from Ishtar and Izdubar, the epic of Babylon, 1884. The British Library/flickr

The most famous account of this myth is Ishtar’s Descent to the Underworld, author unknown. This ancient narrative, surviving in Sumerian and Akkadian versions (both written in cuneiform), was only deciphered in the 19th Century. It begins with Ishtar’s decision to visit the realm of her sister, Ereshkigal, Queen of the Underworld.

Ostensibly, she is visiting her sister to mourn the death of her brother-in-law, possibly the Bull of Heaven who appears in the Epic of Gilgamesh. But the other gods in the story view the move as an attempt at a hostile takeover. Ishtar was known for being extremely ambitious; in another myth she storms the heavens and stages a divine coup.

Any questions over Ishtar’s motives are settled by the description of her preparation for her journey. She carefully applies make-up and jewellery, and wraps herself in beautiful clothing. Ishtar is frequently described applying cosmetics and enhancing her appearance before undertaking battle, or before meeting a lover. Much as a male warrior may put on a breast plate before a fight, Ishtar lines her eyes with mascara. She’s the original power-dresser: her enrichment of her beauty and her choice of clothes accentuate her potency.

Next, in a humorous scene brimming with irony, the goddess instructs her faithful handmaiden, Ninshubur, on how to behave if Ishtar becomes trapped in the netherworld. First, Ninshubur must clothe herself in correct mourning attire, such as sackcloth, and create a dishevelled appearance. Then, she must go to the temples of the great gods and ask for help to rescue her mistress. Ishtar’s instructions that her handmaiden dress in appropriately sombre mourning-wear are a stark contrast to her own flashy attire.

‘No one comes back from the underworld unmarked’

But when Ereshkigal learns that Ishtar is dressed so well, she realises she has come to conquer the underworld. So she devises a plan to literally strip Ishtar of her power.

Once arriving at Ereshkigal’s home, Ishtar descends through the seven gates of the underworld. At each gate she is instructed to remove an item of clothing. When she arrives before her sister, Ishtar is naked, and Ereshkigal kills her at once.

Her death has terrible consequences, involving the cessation of all earthly sexual intimacy and fertility. So on the advice of Ishtar’s handmaiden, Ea – the god of wisdom – facilitates a plot to revive Ishtar and return her to the upper world. His plot suceeds, but there is an ancient Mesopotamian saying:

No one comes back from the underworld unmarked.

Once a space had been created in the underworld, it was thought that it couldn’t be left empty. Ishtar is instructed to ascend with a band of demons to the upper world, and find her own replacement.

In the world above, Ishtar sees Tammuz dressed regally and relaxing on a throne, apparently unaffected by her death. Enraged, she instructs the demons to take him away with them. 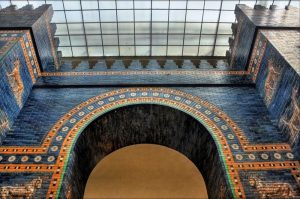 The Ishtar Gate to the city of Babylon, was dedicated to the Mesopotamian goddess. Reconstruction in the Pergamon Museum, Berlin. Daniel Mennerich/flickr, CC BY-NC-ND

Ishtar’s role in her husband’s demise has earned her a reputation as being somewhat fickle. But this assessment does not capture the complexity of the goddess’s role. Ishtar is portrayed in the myth of her Descent and elsewhere as capable of intense faithfulness: rather than being fickle, her role in her husband’s death shows her vengeful nature.

Women and vengeance proved a popular combination in the myths of ancient Greece and Rome, where powerful women such as Electra, Clytemnestra and Medea brought terrible consequences on those who they perceived as having wronged them. This theme has continued to fascinate audiences to the present day.

The concept is encapsulated by the line, often misattributed to Shakespeare, from William Congreve’s The Mourning Bride:

Heaven has no rage like love to hatred turned, nor hell a fury like a woman scorned.

Before she sees her husband relaxing after her death, Ishtar first encounters her handmaiden Ninshubur, and her two sons. One son is described as the goddess’s manicurist and hairdresser, and the other is a warrior. All three are spared by the goddess due to their faithful service and their overt expressions of grief over Ishtar’s death — they are each described lying in the dust, dressed in rags. 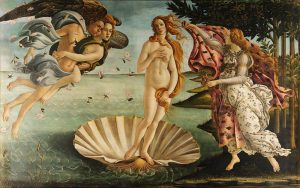 Botticelli’s Birth of Venus, depicting the Roman goddess of love.

The diligent behaviour of Ishtar’s attendants is juxtaposed against the actions of Tammuz, a damning contrast that demonstrates his lack of appropriate mourning behaviour. Loyalty is the main criteria Ishtar uses to choose who will replace her in the underworld. This hardly makes her faithless.

Ishtar’s pursuit of revenge in ancient myths is an extension of her close connection to the dispensation of justice, and the maintenance of universal order. Love and war are both forces with the potential to create chaos and confusion, and the deity associated with them needed to be able to restore order as well as to disrupt it.

Still, love in Mesopotamia could survive death. Even for Tammuz, love was salvation and protection: the faithful love of his sister, Geshtinanna, allowed for his eventual return from the underworld. Love, as they say, never dies — but in the rare cases where it might momentarily expire, it’s best to mourn appropriately.

Ishtar was one of the most popular deities of the Mesopotamian pantheon, yet in the modern day she has slipped into almost total anonymity. Ishtar’s legacy is most clearly seen through her influence on later cultural archetypes, with her image contributing to the development of the most famous love goddess of them all, Aphrodite. 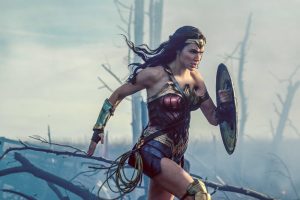 There are intriguing similarities between Ishtar and Wonder Woman. Atlas Entertainment

Ishtar turns up in science fiction, notably as a beautiful yet self-destructive stripper in Neil Gaiman’s comic The Sandman: Brief Lives. Gaiman’s exceptional command of Mesopotamian myth suggests the “stripping” of Ishtar may involve a wink to the ancient narrative tradition of her Descent.

She is not directly referenced in the 1987 film that carries her name (received poorly but now something of a cult classic), although the lead female character Shirra, shows some similarities to the goddess.

In the graphic novel tradition, Aphrodite is credited with shaping the image of Wonder Woman, and Aphrodite’s own image was influenced by Ishtar. This connection may partially explain the intriguing similarities between Ishtar and the modern superhero: both figures are represented as warriors who grace the battlefield wearing bracelets and a tiara, brandishing a rope weapon, and demonstrating love, loyalty and a fierce commitment to justice.

Ishtar, like other love goddesses, has been linked to in ancient sexual and fertility rituals, although the evidence for this is up for debate, and frequently overshadows the deity’s many other fascinating qualities.

Exploring the image of the world’s first goddess provides an insight into Mesopotamian culture, and the enduring power of love through the ages. In the modern day, love is said to conquer all, and in the ancient world, Ishtar did just that.