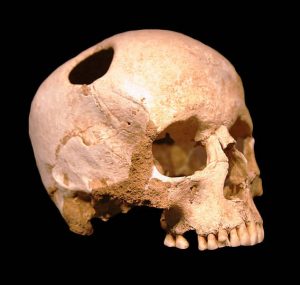 A Neolithic (3500 BCE) skull showing evidence of a trephination operation – the removal of a part of the cranium to relieve pressure, used as a medical treatment for a variety of ailments from migraines to mental illness. The treatment was used in many ancient cultures. (Natural History Museum, Lausanne). / Photo by Jmh649, Wikimedia Commons

A surgical intervention where a hole is drilled, incised or scraped into the skull using simple surgical tools. 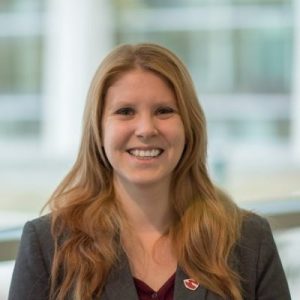 Trephination (also known as trepanning or burr holing) is a surgical intervention where a hole is drilled, incised or scraped into the skull using simple surgical tools. In drilling into the skull and removing a piece of the bone, the dura mater is exposed without damage to the underlying blood-vessels, meninges and brain. Trephination has been used to treat health problems associated with intracranial diseases, epileptic seizures, migraines and mental disorders by relieving pressure. There is also evidence it was used as a primitive form of emergency surgery to remove shattered pieces of bone from fractured skulls after receiving a head wound, and cleaning out the pools of blood that would form underneath the skull.

Evidence for trephination occurs from prehistoric times from the Neolithic period onwards. The main pieces of archaeological evidence are in the forms of cave paintings and human remains; the skulls themselves from prehistoric times. It is the oldest surgical procedure for which we actually have archaeological evidence. At one site in France, burials included forty instances of trephination from around 6500 BCE; one third of the skulls found at the site. The percentage of occurrences there though is fairly high and percentages largely differ between sites and continents. It is from the human remains found at such sites that we know that the surgery had a fair survival rate. Many skulls show signs of healing and indicate that the patient lived for years after the event, even sometimes having trephination performed again later in life and again surviving the experience.

From pre-Columbian Mesoamerica we find evidence on physical cranial remains in burials in addition to iconographic artworks and reports from the post-colonial period. The occurrences are widespread throughout South America, from the Andean civilisations and pre-Incan cultures such as the Paracas culture in Ica in South Lima where burials show signs of trephination, skull mutilation and modification. In Mexico, Guatemala and the Yucatan Peninsula, archaeological evidence dates from between 950 and 1400 CE. The earliest archaeological survey from the American continent published is from the late 19th century CE when the Norwegian ethnographer Carl Lumholtz performed surveys of the Tarahumara mountains. Lumholtz’s publications were the precursor to documented cases from Oaxaca, Central Mexico and the Tlatilco civilisation.

From Europe in the Classical and Renaissance periods we have evidence of trephination from archaeological and literary sources, including within the famous and essential writings of Hippocrates and Galen where it is termed in the Greek ἀνάτρησιζ. One thing that strikes one when dealing with evidence from both America and Europe is just how widespread this technique was and how it appeared as a major surgical technique on both continents independent of influence and association.

The Hippocratic Treatises make mention of trepanning in the chapter on injuries of the head, which states: ‘For a person wounded to the same . . . extent . . . will sustain a much greater injury, provided he has received the blow at the sutures, than if it was elsewhere. And many of these require trepanning.’

Galen also makes mention by explaining the technique of trephination and the risks involved to the patient:

For when we chisel out the fragments of bone we are compelled for safety to put underneath the so-called protectors of the meninx, and if these are pressed too heavily on the brain, the effect is to render the person senseless as well as incapable of all voluntary motion.

Much of the archaeological evidence from Europe for trephination comes from southwestern Germany dating to as early as the stone age. But the cranial evidence for the procedure is widespread throughout Europe; Ireland, Denmark, France and Italy in particular. And there is considerable evidence from Russia and China. The early documents from classical Greece and anthropologists’ observations of pre-modern people in Peru have shown that the people involved had a knowledge of the risk involved in the procedure. Publications detailing the technique from Mote Alban conclude that there was a process of non-therapeutic experimentation for some time which explored the use of different techniques and sizes of burr hole.

Han and Chen have completed a particularly interesting study of the archaeological evidence of trephination in early China. They looked at six specimens from five sites ranging from 5000-2000 BP which showed cranial perforation in prehistoric China. The earliest skull analysed by Han and Chen was the M382 Cranium from Fuikia aite, Guangrao, Shandong. M382 was the skull of an adult male of the Dawenkou culture which shows a hole which was 31mm at the widest point. Evidence of healing shows that the patient recovered and lived for a considerable time before he later died. M382 was radiocarbon dated to around 5000 BP. Han and Chen bring up one particularly interesting hypothesis as to why trephination was performed: to obtain bone discs from people alive or dead for protection from demons. This would suggest, if correct, that in prehistoric China there was a cohabitation of ideas concerning human and supernatural intervention in association with illness and disease.

What we can conclude about trephination is that this ancient surgical technique was astonishingly widespread and was practised on the living and the dead in association with head trauma and for other reasons including the spiritual and the experimental. The cranial evidence which appears is from a range of patients of different ages and sexes, showing that the operation was performed on men, women and children. Evidence of healing and multiple burr holes indicate that there was a survival rate and some were even operated on repeatedly. However, some skulls show us the risks of the operation as well. Some skulls uncovered are evidence that the procedure was abandoned mid-operation as the trephining is incomplete.

It may seem a strange thing that this technique was used throughout the world in different places and periods unrelated to one another. However, there is a logic in the desire to relieve pressure which may naturally lead to trephination as an accepted answer. After all, in theory trephination works, and in some cases it works in practice. This is why the technique is still used for multiple reasons in modern medicine. For instance, trephination is used in some modern eye surgeries such as a corneal transplant; it is just termed differently as a form of pseudoscience called a craniotomy. It is also used in modern intracranial pressure monitoring and in surgery for subungal hematoma (blood under the nail) because one can also refer to trephination in reference to nails and other bones.