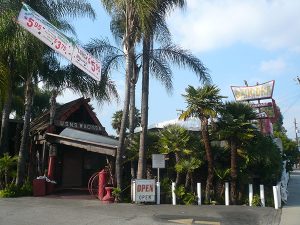 What do shellacked blowfish and tiny umbrellas have to do with Neutra and Eames? Architect and author Alan Hess reveals the yin-yang of Tiki and High Modern. Co-published with Zócalo Public Square. 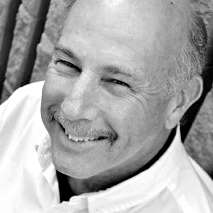 The recent closing of Bahooka, a Tiki-themed restaurant in the San Gabriel Valley city of Rosemead, was an occasion for mourning. Bahooka was one of the great delights of Southern California Tiki, with countless fish tanks (including Rufus, the giant pacu), flaming drinks served in bowls, and bucket lamps hanging from the ceiling that took diners back to the romance of the South Seas in World War II. Thank goodness, though, Tiki is also the style that refuses to die. Its endurance tells us something about Southern California design.

By all rights, Tiki should have been just another passing fad of the 1950s, like hula hoops (another Polynesian import). Its aesthetic is the opposite of what most experts insist is important about midcentury Modern Southern California architecture. In the official architectural history of the region, Craig Ellwood showed us minimalist steel, and Richard Neutra showed us elegant abstraction. In contrast, Tiki showed us textured bamboo screens and blown-glass fishing buoys suspended in fishing nets. Yet Tiki had something in common with Southern California Modernist luminaries: where Ray and Charles Eames showed us whimsy, color, and history, Tiki also showed us whimsy, color and history.

A look through history suggests that the Tiki impulse is an unbroken thread ever since Europeans first encountered the culture of the South Seas: Gauguin escaping hellish Paris for Tahiti; Jack London captivating us with his adventures; Picasso transforming “primitive” masks into “modern” art. Grandview Gardens, an early Asian-exotic restaurant in Los Angeles, was designed by the notably respectable architect Harwell Hamilton Harris, and Trader Vic’s restaurant was a success in (of all places) San Francisco. When Norwegian explorer Thor Heyerdahl undertook the “Kon-Tiki” expedition, which involved sailing thousands of miles across the ocean to Polynesia on a raft in 1947, he launched a postwar tsunami of Tiki restaurants, apartment houses, bowling alleys, and motels across the United States. 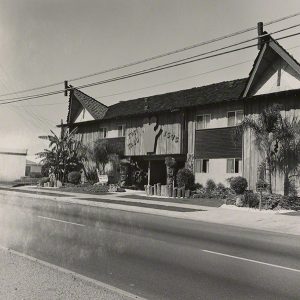 The Tiki tidal wave subsides from time to time; some critics feel the need to champion seriousness, refinement, and austerity in the face of Tiki’s deeply rooted pleasures—its flaming torches, ceremonial cocktail vessels, soaring A-frame gateways, and swaying hula hips. But no one can tamp out the torch we carry for Tiki. In his book The Book of Tiki: The Cult of Polynesian Pop in Fifties America, Sven Kirsten displays the range that Tiki inspires in art: Picasso fierceness, Covarrubias richness, Armet and Davis ultramodernity, Trader Vic extravaganzas, Martin Denny exotica, Shag stylized realism, Disney Enchanted Tiki Room enchantment.

What is it about Tiki and its woven mats, its hanging blowfish, its thatched roofing, its rainbow-colored tropical fish, and its solemn, all-knowing totems? We are no doubt addicts of visual stimulation, and we no doubt love the Polynesian dream. But, for Southern Californians, Tiki’s appeal runs deeper than that. The opulent patterns, the spectrum of colors, and the evocative imagery are as central to this region’s aesthetics as are exposed steel beams and sliding glass walls. Our design heritage is rich, contradictory, inclusive, ephemeral, and ancient. This inheritance can be rendered in neon, thatch, audio-animatronics, architecture, graphics, clothing, salt-and-pepper shakers, theme restaurants, movies, paperback books, or lipstick holders. It is 20th-century style expressed in every range of 20th-century media. Tiki satisfies a need that German architecture pioneer Walter Gropius could not have imagined.

And in the latest news, the much-mourned Bahooka may have a resurrection. Los Angeles Magazine‘s Chris Nichols reports that much of Bahooka’s decor will be re-ensconced in the renovated Clifton’s Cafeteria in downtown Los Angeles. This is entirely fitting. Back in 1931, Clifton’s Pacific Seas restaurant gave us neon palm trees and tropical waterfalls. If you need another sign that Tiki cannot die, there it is.