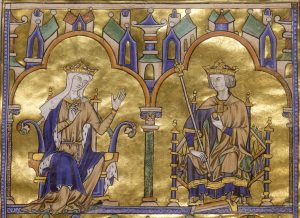 Upon Louis IX’s death, campaign was abandoned before it had even properly begun. 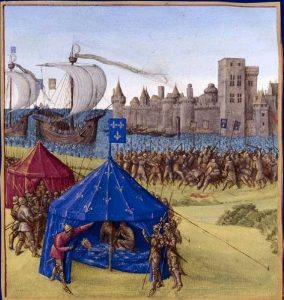 A 15th century CE painting depicting the death of French king Louis IX in 1270 CE during the Eighth Crusade at Tunis. / Wikimedia Commons

The Eighth Crusade of 1270 CE was, like the Seventh Crusade (1248-1254 CE), led by the French king Louis IX (r. 1226-1270 CE). As previously, the idea was to attack and defeat the Muslims first in Egypt and then either reconquer or negotiate control of key Christian sites in the Levant, including Jerusalem. Tunis was decided upon as the first target, from where the Crusaders could then attack Egypt. The plan was dealt the fatal blow of Louis IX’s death from illness in August 1270 CE, and the campaign was abandoned before it had even properly begun.

Louis IX and the Levant

Louis had led the Seventh Crusade, which had met with disaster at the battle of Mansourah in April 1250 CE. He had even been captured but later released after payment of a ransom and the concession of Damietta on the Nile River. Louis had then stayed in the Levant for four years when he refortified such key Latin strongholds as Acre. 16 years later, the French king once more turned his attention to the Middle East, his second bite at the crusading cherry.

Louis had been sending funds annually to the Latin states in the Levant in the intervening years since his botched first crusade, but the rest of Europe was rather preoccupied with affairs elsewhere. In England, a civil war raged (1258-1265 CE), and the Popes were in constant battle with the Holy Roman Empire over control of Sicily and parts of Italy. It seemed that nobody cared very much for the fate of Holy Sites in the Middle East.

In the Middle East, meanwhile, the situation for the Christian cities looked bleak. The Mongol Empire, seemingly intent on total conquest everywhere, was moving closer and closer to the Mediterranean coast. In 1258 CE Baghdad, the seat of the Abbasid Caliphate, was captured, followed by Ayyubid-controlled Aleppo in January 1260 CE and Damascus in March of the same year. It looked very much like the Crusader states might be next in line when the Mongols made raids on Ascalon, Jerusalem, and northern Egypt. When a Mongol garrison was established at Gaza, an attack on Sidon quickly followed in August 1260 CE. Without outside help, Bohemund VI of Antioch-Tripoli was obliged to accept subservience to the Mongols and permit a permanent garrison to be established at Antioch.

The Muslims, in contrast, staged something of a fight back against the Mongol invaders when the Egyptian-based Mamluks, led by the gifted general Baibars (Baybars), won the battle of Ain Jalut on 3 September 1260 CE. Baibars then murdered the Mamluk sultan Qurtuz and took the position for himself, reigning until 1277 CE. The Mamluks continued their expansion over the following years, fighting the Mongols back to the Euphrates River. The Christian cities suffered too, with Baibars capturing Caesarea and Arsuf, even, too, the Knights Hospitaller castle of Krak des Chevaliers. Antioch would be captured in 1268 CE. The Muslim sect the Assassins were also targeted and their castles in Syria captured during the 1260s CE. Baibars was now master of the Levant and declared himself God’s instrument and the protector of Mecca, Medina, and Jerusalem.

In the complex regional politics of shifting alliances, the Christians of Antioch had actually joined forces with the Mongols to take Aleppo. In contrast, the Christians of Acre decided to remain neutral and side with neither the Muslim nor the Mongols. Whatever the macro-politics, the wider geographical reality by the mid-1260s CE was that the Latin East was on the very verge of obliteration. It was into this complicated political, and to a much lesser extent religious, soup that Louis IX and the Eighth Crusaders were about to blindly leap into.

Back in Europe, Louis took up the cross again (if indeed he had ever put it down) in March 1267 CE. The French king had the backing of Pope Clement IV (r. 1265-1268 CE) and a general call was made for nobles and knights in Europe to once again come to the aid of Christians in the Middle East. As in previous campaigns, preachers toured with the Crusade message, a huge pot of cash was accumulated by any means the state could think of, and ships were hired from Marseille and Genoa. As before, Crusaders came from other countries such as England, Spain, Frisia, and the Low Countries, but it was, once more, an expedition dominated by the French. Big names from the nobility who signed up included Alphonse of Poitiers (Louis’ brother), future King Edward I of England (r. 1272-1307 CE), King James I of Aragon (r. 1213-1276 CE) and Charles of Anjou, king of Sicily (r. 1266-1285 CE and also Louis’s brother). An army was gathered of between 10,000 and 15,000 men, similar in size to that of Louis’ first crusade.

The idea that in order to defeat the Muslims and retrieve control of the Holy Land it was best to attack from Africa prevailed, although the first target was not Damietta in Egypt, as in the last Crusade, but Tunis, much further west on the North African coast. The Crusaders needed a mustering point after the various fleets had sailed across the Mediterranean, and the Emir of Tunis, al-Mustansir, was an ally of James I of Aragon. If the region could be controlled, it would provide a solid base from which to attack the Nile in 1271 CE. That was the plan, anyway.

The army of the Eighth Crusade set off for the Middle East in groups, the first being led by James I of Aragon in June 1269 CE, which then, unfortunately, met a storm and disaster. Charles of Anjou set off in July 1270 CE while Edward I was even later and sailed in August 1270 CE. While the Crusaders were dithering, the situation for the Latin states was worsening. As mentioned above, Antioch as taken by Baibars in May 1268 CE after a bloody siege. 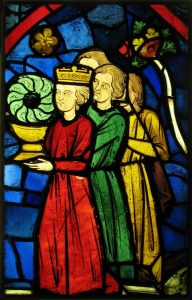 Through July 1270 CE, the bulk of the Crusader fleet landed at Tunis and the army then moved to Carthage to establish a semi-permanent camp and await the stragglers to arrive. As was typical in medieval warfare, the two great enemies were lack of provisions and disease amongst such a high concentration of humans in the height of summer; the Crusader camp was hit by both, and especially problematic was the lack of clean water. Disease and illness struck indiscriminately so that Louis’ son John Tristan died, and even the French king himself, just like on his first crusade, had a serious bout of dysentery. Unlike previously, though, the king did not survive, and after a month of torment, Louis IX died on 25 August 1270 CE. Legend tells (but not his confessor, who was with him when he died) that the king’s last words were ‘Jerusalem! Jerusalem!’

Charles of Anjou, who had only just arrived, took command of the Crusade after Louis’ death. The decision was made to withdraw after a deal was negotiated with the Emir of Tunis to hand over Christian prisoners, guarantee freedom of worship in the city and donate (literally) a golden handshake of 210,000 gold ounces. It was at this point that Edward I of England finally arrived in Africa, but the party was already over. The fleet sailed back to Sicily to regroup in November, but any plans to use the military force to do any good were scuppered along with most of the ships and 1,000 men in a violent storm. Only Edward wished to continue on to the Holy Land, everyone else abandoned the Crusade, the most crushingly disappointing failure of a long line of crusade catastrophes.

Despite the failure, the Papacy did not abandon the idea of crusading. Edward I and his small force of 1,000 men, supplemented by a handful of French knights, arrived at Acre in September 1271 CE on what is sometimes referred to (rather grandly) as the Ninth Crusade. Unsurprisingly, they could do little to stop Baibars’ expansionist plans, but Edward did, at least, gain the benefit of being lauded by poets and songwriters for his efforts as the only European monarch to make it to the Holy Land from the Eighth Crusaders. Louis IX gained an even more spectacular, if posthumous, boost to his image, the king being made a saint in 1297 CE for his services to the cross. Back in the Levant, in 1291 CE with the fall of Acre, the Latin East, established during the First Crusade (1095-1102 CE), effectively came to an end.