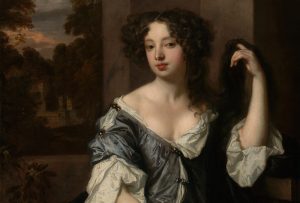 While not quite a rags-to-riches story, Louise de Keroualle’s rapid rise in 17th-century British court and society puts her toward the top of my “Women Who Get Stuff Done” list

One thing is certain, that despite the Duchess of Portsmouth’s unpopularity among the people, it was hard for her enemies to oust her as the King’s chief mistress. Owing to her cleverness, resourcefulness and tact, her position seemed supreme. That was her ultimate triumph.
—Bryan Bevan, Charles the Second’s French Mistress: A Biography of Louise de Keroualle, Duchess of Porstmouth, 1649–1734

Spies! Scandals! Affairs! Such was the life of Louise-Renée de Penacoët de Keroualle—at least, one aspect of her life as a mistress of King Charles II of England. Louise had quite the colorful life playing the political games in both English and French courts, and she held her own extremely well. 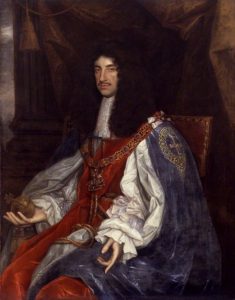 Louise was born in 1649 into the French upper class, although her family had fallen on hard financial times. In her late teens she was a favorite maid of honor to Henrietta-Anne, Duchess of Orleans, the sister of Charles II. Henrietta-Anne took Louise with her on a visit to see Charles, who took an immediate liking to the beautiful French girl. When Henrietta-Anne tragically died not long after her visit, Charles sent for Louise to wait on his wife, Queen Catherine, as a maid of honor. (This was of course the official reason; Charles almost definitely had other, let’s say, less wholesome motives in bringing Louise to England). 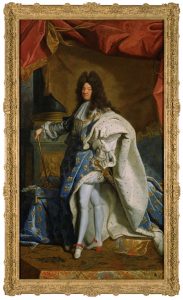 Louise was allowed to take leave for England with the permission of King Louis XIV of France, who saw Charles’s infatuation with the young woman as an opportunity to use her as a spy (of sorts). As Charles’s French mistress, she communicated sensitive information to the French ambassador, who would then relay the information to Louis XIV. Within a year, Louise became one of Charles’s most trusted and beloved mistresses, and he had many portraits made of her, including the Getty Museum’s Louise de Keroualle by Peter Lely. Lely was an extremely gifted painter, and he captured Louise’s beauty and intelligence in this captivating portrait. 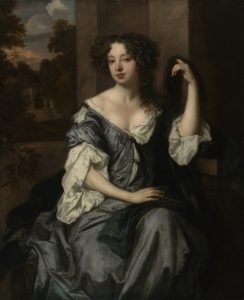 Described in her own time as cunning, clever, and persuasive, Louise grew to hold political power over the King of England. She counseled Charles on political matters, and was known to smooth over tense situations between Charles and Louis XIV. Moderate spying aside, she genuinely cared for Charles, and would get fiercely envious of his other mistresses (Charles had a rather voracious appetite when it came to women, and had many, many mistresses in his life). And although she began her tenure in British court as more or less a pawn, it took very little time for her to begin working toward her own political and social ambitions. She secured lands for her son by Charles in both England and France, and she grew to understand the character of Charles and the English people far better than even the French ambassador.

Unfortunately for Louise, England and France were never on the best of terms during her time in the British court, and she was generally disliked by the English people and court because of her “Frenchness.” (Moreover, people assumed—of course not incorrectly—that she was a spy.) When Charles II died in 1685, Louise retired to France, where she lived for over 50 years until her death in 1743.