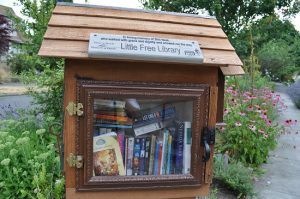 A Little Free Library in the Queen Anne neighborhood of Seattle. / Creative Commons

From seed banks to free food pantries, the little library movement is taking off in neighborhoods across the country.

Audrey Barbakoff and other members of her community wanted a place for people to share and donate vegetable, flower, and herb seeds. Barbakoff, who works as a librarian on Bainbridge Island, Washington, thought that the public library was the perfect place to house a seed library. In 2014, the group and the library staff teamed up to build a seed shed right behind the Bainbridge branch. Residents bring their seeds to the library and the staff organize, label, and store them in the shed where people are free to take what they need.

In March, Holly Dyck, a community development major at Red River College in Winnipeg, Manitoba, searched for ways to put the skills she learned in the classroom to practical use. With spring cleaning in mind, the 25-year-old senior decided to host a clothes swap on campus. Her idea caught on with more than 50 students who gathered in a student lounge to swap clothes that had rarely or never been worn.

Dyck has since graduated from Red River College and plans to host another event. She says neighbors in any community should consider swapping clothes not only to save money, but also to build community.

“I love interdependence. We can’t do everything alone,” Dyck says. “You never know who you’re helping.”

Darla Bradish, a property manager in Bremerton, Washington, heard about the Little Free Library movement and imagined a similar concept, but with food.

“I see the need for little free food pantries in my community,” Bradish says. “It’s hard for some people, like senior citizens and people without cars, to get to the local food bank, so I thought why not place little food pantries in the neighborhoods.”

Bradish got her program, Kitsap Neighborhood Little Free Pantries, approved by her county’s public health district and set up the first two little pantries in December. She created a GoFundMe account and a Facebook page to solicit donations and volunteers. The success of her project led to the local corrections department offering to build her more pantry boxes.

“One guy got his paycheck, but couldn’t cash it until the next day,” she says. “So, he came to one of the pantries to find out what he was going to eat for dinner.”

4. The Buy Nothing Project

In 2013, Liesl Clark and Rebecca Rockefeller experimented with a local gift economy idea where neighbors could connect and give away products and services. That experiment turned into a global movement now known as the Buy Nothing Project and involves groups in 20 nations. The exchange is largely coordinated through Facebook where people can join a local Buy Nothing group based on their geographic location. Members simply join the group and then post what they’re seeking or what they’re giving away, from clothes, dishes, and pets to services such as medical assistance. One Seattle couple had a “Buy Nothing Wedding,” Clark says.

“People love to give,” she says. “So the giver benefits just as much as the receiver does. The Buy Nothing Project is the truest form of the sharing economy.”

Liz Mathews loves taking on do-it-yourself home improvements. However, she doesn’t like buying tools in order to use them only once. In early 2016, she turned to her neighbors and figured that everyone could save a lot of time and money if they just shared their tools. She created a Facebook group where nearly 400 of her Seattle neighbors borrow and exchange tools such as drills, weed whackers, pressure washers, and more. Members also advise neighbors in their do-it-yourself initiatives. Mathews says the impact the group has had on her neighborhood is phenomenal and encourages every neighborhood to start something similar.

“Not only have I found every tool I’ve ever needed, but also I’ve been able to share with others and meet some new, lifelong friends,” she says. “It encourages safety and pride in our ’hood, and that’s what this is really all about.”