On October 2, 1962 journalists at the Chicago Defender interviewed Mae Mallory, a prisoner at the Cuyahoga County Jail in Cleveland, Ohio. Throughout their discussion, Mallory offered her thoughts on the current state of the black liberation movement. She proclaimed that she was “just an insignificant black woman who believes that the tree of liberty has to be watered in blood!” and that her “white oppressors” were soon going to realize that the “idea of self-defense ha[d] penetrated the black man’s thinking.”1 While Malcolm X was imploring African Americans to seize freedom “by any means necessary,” Mallory, all but forgotten from history, was also advocating for armed self-defense and black self-determination well before it was popular.

(Willie) Mae Mallory was born in 1927 in Macon, Georgia. In later interviews she recalled that she had practiced self-defense as a child, forcing her mother to “realize that she wasn’t going to make it so good in the South.” When Mallory was a teen, she and her mother joined the thousands of African Americans who migrated to northern cities in the hopes of finding economic and social prosperity. Mallory came of age in Harlem amid a constellation of black progressive and radical organizations. In the early 1950s, she flirted with the Communist Party and joined several grassroots black nationalist organizations.2

In 1957, Mallory made national headlines when she filed a suit against the New York City Board of Education. Three years after the Brown decision, Mallory found that segregated education was still the norm for her two children. With the help of lawyer Paul Zuber, she challenged the Board’s zoning policies, arguing that they ensured that black children remained in inferior, segregated schools. Eight other mothers joined her in the suit and a boycott of several Harlem junior high schools. The media dubbed them the “Harlem Nine.” Mallory and the other mothers asked for an “open transfer” policy that allowed them to send their children to schools outside of their district and community control of Harlem schools through parent associations. The Harlem Nine eventually won the right to transfer their children. Most importantly, they forced the local court and the Board of Education to declare that de facto segregation existed in New York City schools.3 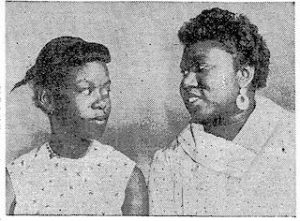 In the early 1960s, Mallory began a friendship with Robert F. Williams, a well-known black nationalist who lived in Monroe, North Carolina. In August 1961, she agreed to go to Monroe to help him host a group of Freedom Riders, non-violent interracial activists who rode interstate buses to test local compliance with desegregation laws. On August 27th, white residents attacked the Freedom Riders. Afterwards, bands of armed white civilians roamed through black neighborhoods. As they heard about the violence, black residents gathered at Williams’s house. Mallory remained at his home throughout the day and was present when a white couple—Bruce and Mabel Stegall—drove into the crowd to “see what defenses” they were planning for the night. Mallory, Williams, and his wife let the couple stay in the house until the crowd dispersed. After they returned home, the couple told local police that they had been kidnapped. 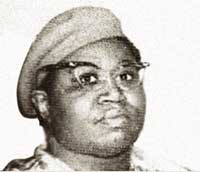 Sure that the Klan would kill them, Mallory and Williams fled. Williams escaped to Cuba and Mallory hid in Cleveland for six weeks before police captured her. Once imprisoned, Mallory worked hard to publicize her case. She also used the spotlight to advocate for black nationalist principles, and critique liberal black leaders. As a working-class African American woman, she did not enjoy the same access to the public sphere as her male counterparts. However, from 1961 to 1965,  Mallory publicized her ideas in the forms and formats that were available to her including speeches, press releases, political tracts, and prison letters.

Amid a political climate that included the 1963 March on Washington and Dr. King’s “I Have a Dream Speech,” Mallory consistently supported separatism, socialism, and self-defense. In her press releases and biographical articles, she insisted that black men and women wanted to be “masters of [their] fate” and that they realized that they needed “liberation—the same as other oppressed peoples in Asia, Africa and Latin America.”4  She also argued that capitalism caused racial discord. She asserted that African Americans “realize[d] that the enemy” was not poor white Americans. The problem was that they “still [did] not realize that [African Americans] were not [their] enemy.” She complained that middle-class African Americans and religious officials were “shook up over [her] theory of self-defense” and that they did not support her because she was not “fighting for accessibility” but “for freedom.” Most importantly, perhaps, Mallory consistently foregrounded the abuses she and other black women faced at the hands of white Americans, highlighting male-leaders’ blindness to their suffering and arguing that male-dominated emancipatory visions were incomplete.5

Mallory was eventually extradited back to Monroe in 1964, where she stood trial for the supposed kidnapping of the Steagalls. An all-white jury convicted her and sentenced her to 16-20 years in prison. She was exonerated in 1965 after a judge overturned the verdict based on the fact that African Americans had been excluded from the jury selection process. Once freed, Mallory continued to fight for self-defense and self-determination until her death in 2007.

Mallory is often overlooked in the historical record, perhaps because expressions of militancy remain associated with masculinity. However, Mallory consistently inserted herself into male-dominated discourses about the direction of the black struggle and perpetually re-contextualized black oppression from the perspective of working-class African-American women. She fought against inequality and articulated a holistic view of black liberation on multiple fronts, making her activism and theorizing a critical part of the black radical tradition.