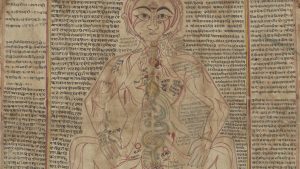 An exquisite treasury of illustrations and objects, the Ayurvedic Man picture book presents a visual history of some of the earliest medical systems and healing practices in the world. It traces Ayurveda and Indian medicine as they travelled from East to West, gaining, losing and regaining popularity over the centuries. This extract features a selection of detailed anatomical drawings that seek to map the human body.

Alongside Ayurveda, traditional medical practices that have been revived in post-independence India include Unani (Greco-Arabic) and Siddha (Tamil). The physicians of each system, known respectively as vaidyas, hakims and siddhars, have practiced and exchanged medical knowledge for centuries.

Today, the anatomical body within each traditional system has been reconciled with the dissected body of biomedical anatomy for diagnostic as well as therapeutic purposes. By contrast, earlier South Asian anatomical maps evoke a more expansive and poetic conception of the body as a fluent entity, charting emotions, blockages, chakras and metaphysical energies. 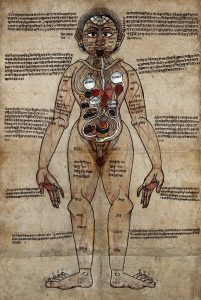 This unique 18th-century Nepali anatomical painting provides a visual interpretation of the organs and vessels of the male body according to classical Ayurveda. Its trail of provenance from Nepal via India to the Wellcome Library through an art dealer points to the long-standing European fascination with what is now often labelled as ‘alternative medicine’. 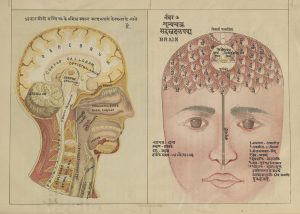 This colour plate is taken from an illustrated textbook intended to educate a new generation of Ayurvedic practitioners in the context of the 19th-century revival of indigenous medicine in India. It juxtaposes the yogic (or subtle) body and Western anatomy in order to suggest similarities between the systems. 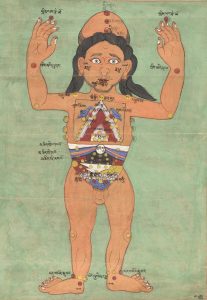 This Tibetan painting depicts bloodletting and moxa points on the body. The moxa points shown refer to the practice of moxibustion, a popular therapy that features in traditional Tibetan medical systems. This involves burning the herb mugwort over acupuncture points on the body in order to stimulate the flow of blood and qi (the circulating life-force). 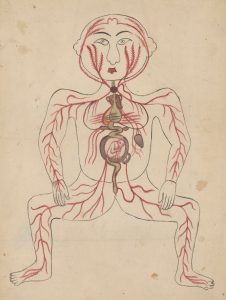 The arteries of the human body with foetus / Wellcome Collection, Creative Commons

In 1396 the Persian author Manṣūr ibn Ilyās composed a popular treatise on anatomy entitled Tashrīh-i Manṣūrī, a text on the five ‘systems’ of the body – bones, nerves, muscles, veins and arteries. It summarised many of the observations of the Greek physician Galen, and was the first such treatise to be accompanied by illustrations and drawings of the human body in anatomical detail. 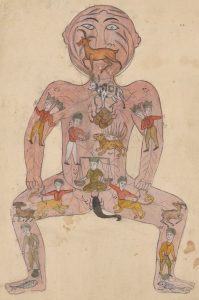 This Persian illustration relates the signs of the zodiac to human anatomy, suggesting that during certain months one would be ill-advised to medically treat the associated body part. Pisces (the fish, February–March) appears on the feet, Aries (the ram, March–April) is related to the head and Taurus (the bull, April–May) is shown on the neck. 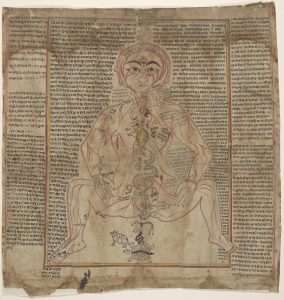 This painting presents a primarily medical image emphasising the veins, arteries and intestinal tract. While the image of the body is similar to the style of the Persian Tashrīh-i Manṣūrī series, the text surrounding it is a mixture of Sanskrit and old Gujarati, which places its origins in western India. It presents a view of the body that combines medical and tantric ideas. Alongside the anatomically accurate organs, the Indian artist added chakras to the spinal column and mythical and astrological animals below it.