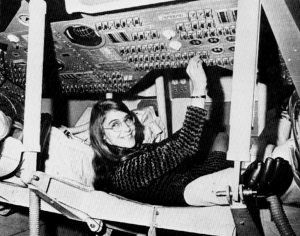 Margaret Hamilton inside a mock-up of the Apollo command module. MIT

There is actually a woman who holds a special place in my mind when I think about women who have made great impact in my field.

I could talk about Grace Hopper, the woman who coined the term “bug” when talking about computers. She was an amazing programmer and engineer who brought our military and civil computer systems forward, resulting in major impacts.

I could even talk about Ada Lovelace, who was an English mathematician and one of the inventors of mechanical general-purpose computers. Had it not been for her work, computers may not be remotely what we think of today.

On this IWD, the influential woman on my mind is Margaret Hamilton. She not only programmed the software for the Apollo Moon missions; but for her, computer software would still be something we get on chips.

Her tireless work and refusal to pay heed to disparaging comments about women in the workforce, I – a man – wouldn’t have the job I do now.

No matter who you are, look to people like Margaret Hamilton for inspiration.

Do not let another’s view limit you.

Read more about Margaret in this in-depth Wired article: http://www.wired.com/2015/10/margaret-hamilton-nasa-apollo