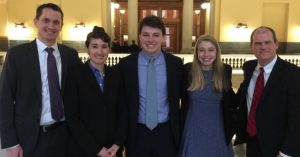 Two of the Massachusetts youth plaintiffs, Shamus Miller and Olivia Gieger, accompanied by their lawyers, Phelps Turner, Jennifer Rushlow, and Dylan Sanders, after a hearing in January. (Photo: Our Children’s Trust)

‘This is an historic victory for young generations advocating for changes to be made by government,’ said 17-year-old plaintiff Shamus Miller.

Siding with four teenage plaintiffs and the environmental groups that backed them, the Massachusetts Supreme Judicial Court on Tuesday ruled that the state has failed to fulfill its legal obligation to reduce greenhouse gas emissions.

The unanimous decision from the state’s highest court reverses a lower court ruling and requires the state Department of Environmental Protection (DEP) issue regulations “that address multiple sources of categories of sources of greenhouse gas emissions, impose a limit on emissions that may be released, limit the aggregate emissions released from each group of regulated sources or categories of sources, set emission limits for each year, and set limits that decline on an annual basis.”

By failing to do so, the court said, the DEP was falling short of complying with the 2008 Global Warming Solutions Act, which says that by 2050, greenhouse gas emissions be reduced by at least 80 percent below 1990 levels. It includes timelines for reductions in 2020, 2030, and 2040.

Massachusetts is not on track to meet its 2020 greenhouse gas reduction goal of 25 percent below 1990 levels—a fact the plaintiffs say is “directly related to DEP’s failure to issue the required regulations.”

“This is an historic victory for young generations advocating for changes to be made by government,” said 17-year-old plaintiff Shamus Miller. “The global climate change crisis is a threat to the well being of humanity, and to my generation, that has been ignored for too long.”

“This is a historic day,” said lead attorney Jenny Rushlow, of the Conservation Law Foundation, which brought the case along with Mass Energy Consumers Alliance and with the support of Our Children’s Trust, an Oregon-based organization orchestrating youth-driven legal campaign in the United States. “Today our highest court declared clearly and unequivocally that our leaders can no longer sit on their hands while Massachusetts communities are put at risk from the effects of climate change.”

Tuesday’s win follows two other recent landmark victories in youth-led lawsuits against the federal government and the State of Washington.

“In agreeing with the youth plaintiffs in this case, the Massachusetts Supreme Judicial Court joins growing global judicial recognition of youth’s rights to demand that their governments act in accordance with the urgency of the climate change crisis,” said Julia Olson, executive director and chief legal counsel at Our Children’s Trust.

“Youth around the country and internationally are bringing their governments to court to secure their rights to a healthy atmosphere and stable climate,” Olson said. “Today, the Massachusetts Supreme Judicial Court called Massachusetts to task and underscored the need to take significant action now, so youth are not unfairly consigned to a disproportionately bleak future should we fail to address the most important and time sensitive issue of our time.”

Similar cases brought by youth to protect the atmosphere are pending in the federal district court in Oregon, and in the state courts of Pennsylvania, Colorado, Washington, and Oregon, as well as in several other countries.