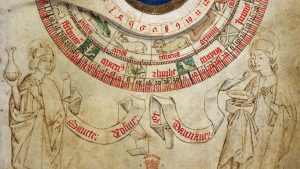 Dr. Alixe Bovey investigates the influence of astrology, religion and magic on medical knowledge and practice.

By Dr. Alixe Bovey
Specialist in Art and Culture of the Later Middle Ages
The Courtald Institute of Art

Most medieval ideas about medicine were based on those of the ancient work, namely the work of Greek physicians Galen (AD 129 – 216) and Hippocrates (460 BC – 370 BC). Their ideas set out a theory of the human body relating to the four elements (earth, air, fire and water) and to four bodily humours (blood, phlegm, yellow bile and black bile). It was believed that health could be maintained or restored by balancing the humours, and by regulating air, diet, exercise, sleep, evacuation and emotion. Doctors also often advised risky invasive procedures like bloodletting.

Medical knowledge derived from antique theory was largely confined to monasteries and the highly educated. For ordinary people, especially those outside towns, it would have been difficult to access professional practitioners. Those in need of medical assistance might instead turn to local people who had medical knowledge, derived from folk traditions and practical experience. 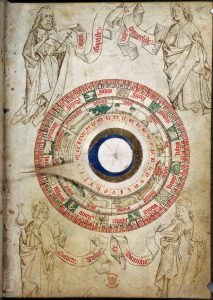 Guild-Book of the Barber-Surgeons of the city of York

In the Middle Ages barbers were not only responsible for cutting hair (to remove lice), but also for surgery such as tooth-extraction and amputations. In England, it was not until 1745, that a separate surgeons’ guild was created, separate from the barbers’ guild. This manuscript was created in the late 15th century, for members of the Guild of Barber Surgeons in York and demonstrates how, in the Middle Ages, medical knowledge and practice was influenced by religion and astrology.

Divided into two parts it is the latter that includes the medical and astrological drawings and diagrams, including that of the Vein Man, the Zodiac Man, the Four Humours and a circular zodiac chart, known as a volvelle, with moving parts. The volvelle would have been used to predict the best time to provide medical treatment and by the end of the 1500s physicians, by law, would use it to calculate the position of the moon before carrying out surgery. The success of medical treatment was also considered reliant on assistance from religious saints: the volvelle here is surrounded by St John the Baptist, St John the Evangelist and the saints Cosmas and Damian, the patron saints of doctors and surgery.

In the Middle Ages the Four Humours were thought to be bodily fluids which affected a person’s health: blood, phlegm, black bile and yellow bile. In the image, each of the four humours is personified, and depicted around the central image of the head of Christ. Each is male and identified by captions that correspond to the fluids: Melancholy, Sanguine, Phlegmatic and Choleric.

The drawing of the zodiac man, labelled ‘Homo signorum’ shows parts of the body linked to their governing zodiac symbols. Here we can see Pisces is associated with the feet, Virgo with the belly and Taurus with the neck.

The stars and planets

Medieval astrologers believed that the movements of the stars influenced numerous things on earth, from the weather and the growth of crops to the personalities of new born babies and the inner workings of the human body. Doctors often carried around special almanacs (or calendars) containing illustrated star charts, allowing them to check the positions of the stars before making a diagnosis. Many of these almanacs included illustrations, helping to explain complicated ideas to patients. The picture below shows a ‘zodiac man’ from one of these almanacs from 1399. The diagram was intended to explain how the astrological formations (or star signs) rule over each part of the body. The man’s pointing finger serves as a warning against the powerful forces of the stars.

Ancient studies of astrology were translated from Arabic to Latin in the 12th and 13th centuries and soon became part of everyday medical practice in Europe. By the end of the 1500s, physicians across Europe were required by law to calculate the position of the moon before carrying out complicated medical procedures, such as surgery or bleeding. 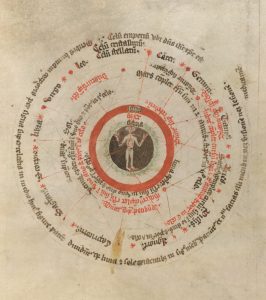 Drawing of a microcosmic man, from a medical treatise

This circular diagram of a microcosmic man, or zodiac man, depicts how astrology affects different parts of a human body. Medieval physicians would use this knowledge to determine the best time to perform medieval treatments. By the end of the 1500s physicians, by law, had to calculate the position of the moon before carrying out surgery.

A diagram known as the ‘zodiac man’ superimposed the appropriate star sign onto body parts; in a manuscript owned by the Barber Surgeons of York, this diagram faces a circular wheel marked with astrological data and equipped with a moving pointer (known as a volvelle) so that the physician could align the data according to the position of the sun and moon. 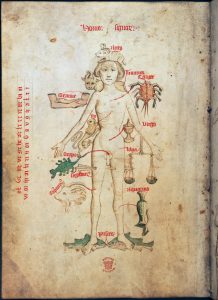 Guild-Book of the Barber-Surgeons of the city of York

One of the main ways in which a physician would diagnose illness was by examining stools, blood and especially urine: physicians were often depicted in images holding a flask of urine up to the light. 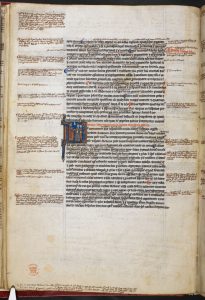 Historiated initial of a doctor teaching urine examination to students, from Hippocrates’s Prognosticon

Doctors would often diagnose illnesses by examining urine and were taught that this would demonstrate the body was imbalanced, according to the theory of the four humours. This medieval approach to illness, originally developed by ancient Greek physicians Hippocrates and Galen, stated that illness was caused when one of four bodily liquids (or humours), namely blood, phlegm, black bile and yellow bile, fell out of balance. 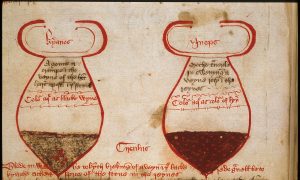 Drawings of glasses showing urine of different hues, from a medical treatise

Images like these, which show glasses of different coloured urine, would have been used by medieval doctors to help diagnose illness. As well as colour, physicians would check the smell and even taste to determine if the body was out of balance, according to the theory of the four humours. This medieval approach to illness, originally developed by ancient Greek physicians Hippocrates and Galen, stated that illness was caused when one of four bodily liquids (or humours), namely blood, phlegm, black bile and yellow bile, fell out of balance.

Another area of medical concern was how to treat wounds, ruptures and lesions, in which the surgeon specialised. One illustrated treatise demonstrates a procedure for a skull fracture, which is accompanied by a narrative of Christ’s life; this juxtaposition may hint at the need for divine assistance for both surgeon and patient. Although it is impossible to determine the success rate of such interventions, the survival of medieval skulls with bone that has knitted together after the treatment of an injury demonstrates that even traumatic head wounds were not always fatal. 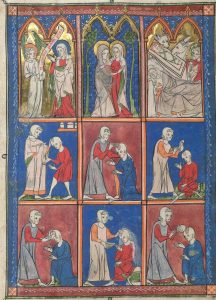 While the first three of these nine illustrations are concerned with the announcement and the birth of Christ, the remaining six images demonstrate ways in which a damaged or broken skull may be fixed through surgery, clearly showing the intertwined nature of medicine and religion. 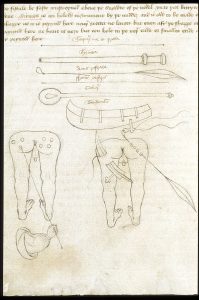 Medicine and the Church

In medieval Europe, medicine generally operated within the context of the Christian Church. Hospitals which cared for the elderly and the ill were often run by religious orders, which could maintain infirmaries for their own members and operate hospitals for others. Where professional medicine could not help, the faithful often turned to saints, and visited saints’ shrines in the hope of miraculous cures. The windows of the Trinity Chapel in Canterbury Cathedral, completed c.1220, show pilgrims suffering from illness, injury and even insanity flocking to Thomas Becket’s shrine; in some scenes, physicians with urine flasks turn away in despair, unable to equal the healing power of the saint.

The sick might also have turned to the occult: the dividing line between magic and medicine is not always obvious in medieval sources, and many medical practitioners used occult knowledge to heal the sick either by natural means (using, for example, herbs to treat or prevent illness or ward off danger) or using demonic magic, which attempted to use diabolical forces to intervene with human affairs.