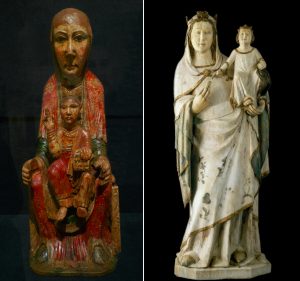 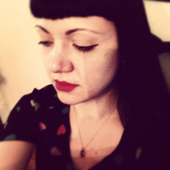 The Queen of Heaven

The image of the Virgin and Christ Child was ubiquitous in medieval art. Architectural and portable sculpture, altarpieces, stained glass windows, and other art works featured the Mother of God with her infant son. The Virgin Mary was regarded as the Queen of Heaven, the great intercessor between her Son and the helpless earthly souls who looked to her in time of need. The familiar Gothic depiction of an approachable Virgin as a beautiful young queen, standing in an S curve and delicately balancing the small Christ Child on her hip, was preceded by the more sober, rigid, and hieratic Romanesque depiction of a seated Virgin holding the Christ Child on her lap, a type referred to as a “Throne of Wisdom.” (This Romanesque type can be traced back to Byzantine depictions of Mary as “Theotokos” or the Mother of God). 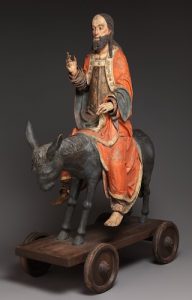 Palmesel (or palm donkey, refers to the statue of Jesus on a donkey), 15th century, German, limewood with paint, 156.2 x 60.3 cm (The Metropolitan Museum of Art, New York)

A number of these sculptures have come down to us from the 12th century, though records indicate that earlier examples did exist. They are true sculptures in the round, made of wood, and usually measuring 3-4 feet in height. They were designed for mobility—carried in the many processions of the Middle Ages in celebration of feast days (a practice which continues in some parts of Europe to this day).

Believed to be a manifestation of the Virgin’s presence and authority, the sculpture was paraded around during times of war, famine, disease, or to simply collect money for the church. Like other portable sculpture of the Middle Ages (see the example, above), they were an essential part of communal religious life. We can only imagine the sounds of clashing cymbals-described by one witness in the early 11th century and the many desperate hands trying to touch the sculpture as she passed through the crowds.

Referred to as “Majesties” in contemporary texts, the sculptures are simple compositions in which the Virgin Mary sits on a throne with the Christ Child sitting on her lap. Strictly frontal with expressionless faces, both figures wear simple tunics, the ripples of which fall in perfect, repetitive patterns, resulting in a very stiff and symmetrical quality. Originally, the sculptures would have been polychromed over linen and gesso then decorated with tin leaf, with the more exquisite examples decorated with gold or silver leaf and adorned with gems. 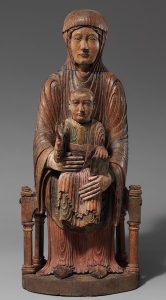 A good example of a “Throne of Wisdom” sculpture which still retains some of its original color is found at the Cloisters Museum, a branch of the Metropolitan Museum of Art in New York. The sculpture is made from several pieces of walnut doweled together. Originally, the Virgin wore a red robe covered by a dark blue mantle which was decorated with tin leaf to simulate gold. Christ’s tunic was originally a dark green with red lining, covered by a red overgarment known as a himation. This too was originally decorated with tin leaf.

The sculpture puts into visual form the typological tradition of comparing Mary to the Throne of Solomon (typology refers to the idea that events and individuals in the Old Testament prefigured those in the New Testament). King Solomon’s famous throne is described in the Book of Kings of the Old Testament as a throne of ivory covered in gold. Christ, like his ancestor King Solomon, embodies wisdom and justice. Thus, Mary is a Sedes Sapientiae or Throne of Wisdom—the Mother of God, enthroned herself, who serves as a throne for the son of God turned into human flesh. The Christ Child on her lap represents divine wisdom incarnate, whose wisdom is communicated through his adult features, making him look like a miniature man. The open bible he holds is also a representation of the divine wisdom he embodies.

To the medieval mind, the Throne of Wisdom statues were earthly manifestations of both the presence and the authority of the Virgin Mary. They were seen as a way to communicate with the heavenly court—relaying people’s prayers and interceding on their behalf. In fact, the statues were not thought to have been made by sculptors in workshops, but to be miraculous in origin. Stories range from one being discovered by woodcutters enclosed in a tree to one arriving on a ship without sailors or oars and enveloped in a bright light. They were also said to be immune to fire as a number of accounts attest of statues surviving church fires without even being scorched. According to one thirteenth century legend, a Throne of Wisdom statue was able to save itself from a burning church by leaping out of the window and into the arms of a count who was walking by!

The cult of relics 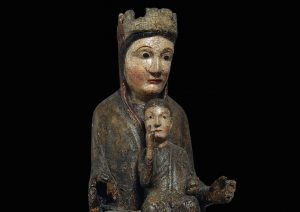 The Throne of Wisdom sculptures also functioned within the broader context of the growing cult of relics in medieval Europe. Relics are the physical remains, such as bones, strands of hair, teeth, etc, or secondary relics associated with Christ, the Virgin, martyrs, and saints. These secondary relics could include clothing, jewelry, instruments of torture, or anything that the saint had come in contact with while alive. As early as the 4th century, these remains and objects were said to possess miraculous powers. Hordes of pilgrims would visit various churches built over the tombs of saints or shrines with relics in hopes of being cured of disease, to atone for their sins, or to simply venerate the saint. Remains of martyrs and saints were frequently moved and divided so that new sites were established in places never associated with the saint.

There is ample evidence suggesting that the Throne of Wisdom sculptures were occasionally used as reliquaries (containers for relics). Our example from the Cloisters has a small circular cavity on the Virgin’s left shoulder and x-rays confirm a relic contained within. The relic may not necessarily be associated with the Virgin Mary (parts of her clothing or veil, strands of her hair, and drops of her milk were frequently cited relics), but could be fragments of another holy individual. Whatever the relic, its inclusion would have made the Virgin’s perceived intercessory power that much more effective.

It has been proposed that the sculptures also played an important role in the early days of medieval liturgical drama in which stories from the bible were enacted in a church for the mostly illiterate audience. One of the earliest plays was the Adoration of the Magi in which clerics dressed as the three kings and approached the Throne of Wisdom sculpture bearing gifts for the Christ Child.  Explain Adoration of the Magi.

The surviving texts of these plays are very clear about who will play the roles of the three kings, Herod, the midwives, etc. but are silent with regard to the human representations of the Virgin and Child, only referring to them as an image. It seems that the use of human actors to represent Mary and Christ was considered inappropriate until the 15th century when it became acceptable. Thus, the Throne of Wisdom sculptures represented the Virgin and Child in the early days of medieval theatre, receiving the traditional gifts of gold, frankincense and myrrh from the clerics dressed as the three kings.

From reliquary to the star of a liturgical play, the Throne of Wisdom sculpture type is a good reminder that medieval religious art had multiple functions, and was didactic and spiritual at the same time.

Enthroned Virgin and Child at The Metropolitan Museum of Art

Virgin from Ger, Virgin from Gósol and other medieval sculpture from Museu Nacional d’Art de Catalunya, MNAC, Barcelona on the Google Art Project

Pilgrimage Routes and the Cult of the Relic

Ilene H.Forsyth, The Throne of Wisdom:Wood Sculptures of the Madonna in Romanesque France (Princeton University Press, 1972).