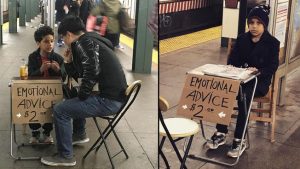 If you’re in need of some emotional advice, but have neither the time or the money to waste on a qualified therapist, this 11-year-old kid has you covered. Ciro Ortiz has set up shop in a New York subway station, and for a measly $2, he offers five-minute “emotional advice” sessions.

Every Sunday, Ciro Ortiz spends about two hours at the Bedford L subway station, sitting at a folding table with a cardboard sign that reads “emotional advice $2”. Believe it or not, people actually do stop by for some pearls of wisdom from the “emotional advice kid”. They ask him about all sorts of things, from relationships and career advice, to Donald Trump, and he does his best to help them find the answer to their problems. 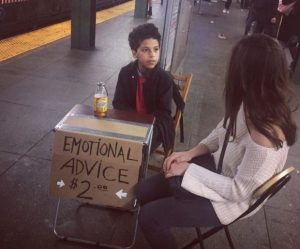 “I don’t make much money,” Ciro’s dad, Adam, said. “One night he was just inspired to try an idea of how he could make his own. I was supportive of the idea and the next day we went into Williamsburg and set up the stand on the street.” He was surprisingly popular with passers-bay, and he’s been doing it ever since. On a good day, he’ll earn about $50, but it’s not just money that motivates him. Ciro was bullied at school in the past, and that inspired him to channel his entrepreneurial spirit in the makeshift emotional advice desk, rather than the much more popular lemonade stand.

Plus, Ciro is apparently really good at giving people emotional advice. “Somebody came up to us and said that what he told her is what she’d been feeling in her gut that whole time,” his father says. He was really nervous and unsure of himself in the beginning, but after a few Sundays, he started coming home saying ‘I’ve met so many wonderful people. I’m gonna end up having so many friends,’ his mother, Jasmine, recalls. 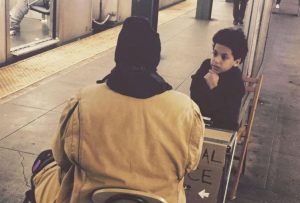 “People ask about their relationships, about being confused in what to do with their life, or […] Donald Trump,” Ciro told Metro.co.uk. “I just tell them to look at the simplicity of their problem. To just find the simple answer, what do they NEED and the answer is usually simple.”

One pattern the 11-year-old has identified during his experience as an emotional adviser is that people seem to fear change. “They feel a certain way in the past and when they look [back] in hindsight, they say things were so much better back then,” he told the New York Post. “We have to accept [change]. It’s going to happen — it’s always going to happen. Life is always changing.” 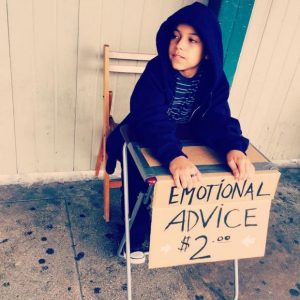 And in case you’re wondering where the boy gets his wisdom for, he claims it’s from his parents, who have always taught him to be kind to everyone and pursue his dreams.