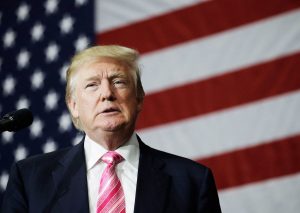 In 1890 the young W.E.B. Du Bois delivered the Harvard University Commencement address “Jefferson Davis as a Representative of Civilization.” Du Bois focused on a central figure of nineteenth-century America as he prophesied the meanings of freedom, democracy, and what American life — or more accurately, civilization — would look like over the next hundred years and beyond for the white world, the black world, and other non-white populations that hitherto occupied spaces outside the epicenters of civil and political society. 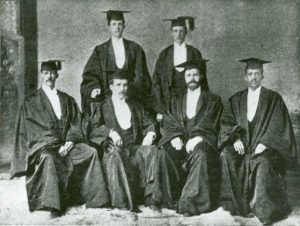 Born in Kentucky, Jefferson Davis held the offices of U.S. Representative and Senator for the state of Mississippi and later Secretary of War under President Franklin Pierce. Following Pierce’s failure at the 1856 Democratic National Convention to acquire Presidential re-nomination support from party delegates, Davis ran again, won, and went back to Congress as a Senator. Yet with the 1860 election of Abraham Lincoln and escalating distrust between South and North, Davis resigned his Senate post.

After ensuing Southern secession, Davis assumed the Presidency of the Confederate States of America, maintaining the position until the Civil War’s end. Davis had poor health much of adulthood and detractors internal to the Confederacy. While underestimated by peers and despised by several prominent Confederate politicians and generals, he nevertheless forged an obedient coalition and crafted a resolute model of governance and rule. Although Davis lived until the post-Reconstruction year before Du Bois’s speech, his thoughts and actions as Confederacy President provided core teachable moments. 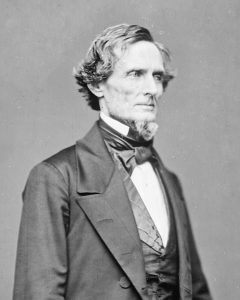 Jefferson Davis, President of the Confederate States of America

Du Bois considers Davis a person whose self-conception is that of “a typical Teutonic hero” and whose notion of leadership personifies “the idea of the Strong Man.” By ‘Strong Man,’ Du Bois means a leader espousing “[i]ndividualism coupled with the rule of might.” The Strong Man, suffuse with strength, privileges the “I” and self-assertion over the “Thou.” The Strong Man bolsters civilization through “stalwart manhood and heroic character” on the one hand and “moral obtuseness and refined brutality” on the other. The Strong Man often relies on disgruntled and violent mobs, adherents who are, as Hannah Arendt observes, angry masses that feel excluded from previously accessed corridors of politics, believe their standing is society has evaporated compared to the prior generation, loathe heterogeneous society as is, and cry out for the homogeneous order the Strong Man promises. The Strong Man’s patriarchal idea of civilization is intimately tied to racial orders, and it is his vision of a future world that augurs the consolidation and regeneration of the white race above all other races.

Du Bois contrasts the Strong Man with the ‘Submissive Man,’ characterized by weakness, a commitment to truth, and desire to acquiesce to the Thou, the You, the part of personhood not obsessed with the image of the being reflected back in the mirror. Whereas the American Teuton, of which Davis is exemplary, is indicative of the Strong Man, the Negro is for Du Bois the archetypal Submissive Man Davis dismisses.

Ironically, the Strong Man and Submissive Man need one another, their diametrically opposed views notwithstanding. Otherwise, the polity they inhabit devolves into despotism or slavery, and not merely for those emboldened at any given time with the might and right of state.

Jefferson Davis, “the peculiar champion of a people fighting to be free in order that another people should not be free,” missed the inseparability of the I and the You. He refused to admit the ways we’re interconnected, in relation, despite our pluralistic and differential conceptions of the free life and in spite of attempts by agents of state and their lackeys to interfere, dominate, segregate, deport, and annihilate.

Davis’s Strong Man hubris spawned a vitriolic, angry, white nationalist, revolting mass. It also led to his downfall, the Confederacy’s decline, and American civilization as he conceived it, in large measure due not only to abolitionists but also the actions of fugitives and slave agents catalyzing its genesis. It didn’t, however, obliterate the wages of whiteness and political philosophy of white supremacy in the post-1865 polity. Du Bois documents this in The Philadelphia Negro, The Souls of Black Folk, “The Souls of White Folk,” and, most notably, Black Reconstruction in America, as does scholars such as C.L.R. James, Frantz Fanon, Annette Gordon-Reed, and Nell Painter. This last point haunts us today.

Authority and authoritarianism undergird Du Bois’s prognostications. An agent with “authority” demands dogged obedience, compliance, and dispelling of ressentiment urges by the subjects of sovereign command. “Authoritarianism” is the structural macropolitical systemization of a type of statecraft designed by what Theodor Adorno and collaborators call an authoritarian personality. It is a hierarchical social, political, and economic order militating against egalitarianism. Moreover, as Arendt notes in “What Is Authority?” we shouldn’t confuse authoritarianism with tyranny, for “the tyrant rules in accordance with his own will and interest, whereas even the most draconian authoritarian government is bound by laws.”

Du Bois wrestles with Jefferson Davis’s legacy because Davis oversaw a confederation based on slavery and apparatuses of unfreedom enshrined in jurisprudence. Du Bois cautions against ambivalence, nihilism, and avoidance of the afterlife of chattel slavery, first since modes of enslavement sanctioned by law mutated and have been upheld at different junctures by authoritarian personalities, though not always in the public sphere by the prime executive. An amplification of these chilling effects occurs when the entity wielding authority — whose public beliefs defend racism, sexism, xenophobia, chauvinism, and rabid masculinity — is Commander-in-Chief. Second, struggle, resistance, and abolitionist challenges to authority and authoritarianism are as much a tradition as the tradition their actions seek to dislodge. Never forget that. 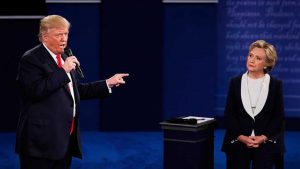 What’s incontrovertible is Trump’s authoritarian personality. Only time will tell what type of authoritarian President Trump will be, Jefferson Davis reincarnated or otherwise. And if his senior administrative appointments are any indication, particularly the ghastly selection of avowed white nationalist Stephen Bannon as top White House advisor, then we’d be foolish to assume Trump’s stated public beliefs and campaign promises are one big bluff. Parrhesia is hard to digest.

We have a choice in the Age of Trump: ignore history and our intrinsic abilities for action, thereby reifying the authoritarian order Trump very much plans to implement. *Or* protest. Petition. Resist authoritarianism and its mob enforcers. Organize. Unlock our political imaginations. Believe firmly our actions can match our convictions.

‘American Democracy’ is an unrealized and perhaps unrealizable Platonic ideal, but democracy in America, in the hemisphere, and in the globe, measured by nodes of progress, are attainable. Progress, as with regress, comes in stages. And like freedom, the theory of relativity, and quantum mechanics, the meaning of progress and attendant strivings for it begin with acknowledging a foundational phenomenon: perpetual flight.

Flight operates betwixt, between, and beyond the options of Strong Man and Submissive Man. “Human” progress, a consequence of ongoing marronage, beckons us.