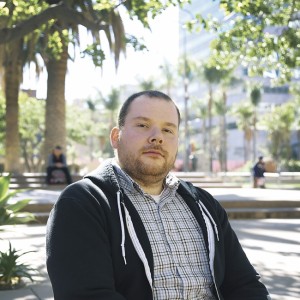 Joseph Van Horn, a Ph.D. student in political science at UCLA and a Trump supporter, wonders why his fellow scholars aren’t willing to take seriously the merits of a formidable political movement. Maria J. Avila for The Chronicle

eter Calautti finds a lot to like about Donald J. Trump. He likes that the front-runner for the Republican presidential nomination is speaking to the concerns of people in working-class neighborhoods like the one where he grew up. He likes that Mr. Trump isn’t afraid to talk about illegal immigration. He likes that the Republican Party, which he says has abandoned conservative principles in favor of large-scale military intervention and tax cuts for the rich, is being punished by Mr. Trump’s ascendancy.

He doesn’t agree with everything the billionaire says, and bristles at some of his sharply worded proposals. Maybe it’s because Mr. Calautti grew up around New York City, but he’s used to big personalities. He says you have to take their rhetoric with a grain of salt.

Assuming he gets the chance, Peter Calautti plans to vote for Donald Trump.