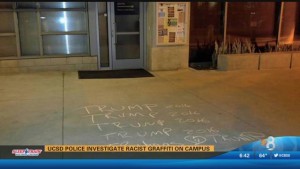 Students at the University of California, San Diego (UCSD) are demanding campus officials identify the individuals responsible for spray-painting racist graffiti, along with pro-Donald Trump messages, on campus property overnight on Saturday.

According to the local CBS affiliate, the vandalism was carried out by five men wearing hoods , who were seen by UCSD students.

This weekend UCSD is hosting prospective students from around the world, who will be making a decision about which school to attend in 2017.

Cultural buildings on campus, which faculty says are there to help racially diverse students “feel welcome” at UCSD, were specifically targeted with the messages.

The graffiti included messages directed at Muslims, Jews, LGBTQ people and other groups.

CBS8 visited the campus as the graffiti was being removed. According to their report, some of the language used by the vandals was too offensive to show on camera.

Watch the video , courtesy of CBS 8.

The graffiti incident has served to escalate longstanding racial tensions on UCSD’s campus.

In 2010, incidents of racism came to a head after videos of the infamous ‘ Compton Cookout ,’ were shown on a campus television program. The ‘ghetto-themed’ party, organized by white students, was designed to make a mockery of Black history month.

After a noose was found hanging from one of the buildings on campus, a student walk-out, accompanied by large scale protests on campus led to the declaration of a ‘racial emergency.’

In order to diffuse tensions, university officials accepted a list of 32 student demands presented by member of the Black Student Union.

In the years since the ‘Compton Cookout,’ students have routinely criticized campus officials for failing to live up the 2010 agreement.

The rise of Donald Trump has led to an increase of similar racist activity at Universities across the country.

Trump has lent his stamp of approval to hate speech and to the kind of race-hatred that is only expressed by hooded men, under the cover of darkness.

Mr. Gattas also provided a link to an official UCSD statement regarding the incident HERE, which reads as follows:

A series of incidents occurring on college and university campuses across the United States have reflected our nation’s current divisive political climate. Unfortunately, late Friday evening graffiti promoting the deportation of undocumented immigrants and the construction of a wall on the border of Mexico was discovered chalked on UC San Diego’s campus sidewalks. This graffiti runs counter to our campus values of equity and inclusion. We value diversity and respect for all cultures.

UC San Diego is steadfast in the commitment to our Principles of Community which reflect a collective dedication to a campus where we uphold each individual’s right to dignity, justice and respect. We affirm the Principles of Community as the guide for all campus citizens as we move forward to foster the best working and learning environment.