Formerly known as the “devil’s drink,” coffee is increasingly being viewed as an “elixir of life”. Nowadays, we are getting accustomed to read about news of coffee intake in different media outlets reporting on research showing positive effect on health outcomes like Type 2 diabetes, colon cancer, and cardiovascular disease. According to a metaanalysis from 2014 there is even a weak, but significant, inverse association between moderate coffee consumption (1-2 cups per day) and total mortality.

What you don’t read in the news as often as the potential health benefits of coffee consumption is that coffee is a crop being increasingly threatened by ongoing climate change. In a recent PLOS ONE journal article, the authors calculated what future coffee production will look like, since many areas were coffee is currently cultivated will become less suitable for agriculture, and the production of coffee is highly sensitive to local climate. By using ecological niche modeling to map areas suitable for coffee production under climate scenarios for 2050, the authors were able to ascertain whether there is sufficient land available to meet future demands for coffee, and to evaluate trade-offs with alternative land uses, including deforestation, and associated costs to carbon and biodiversity. The projections indicate that climate change will be detrimental for Arabica coffee cultivation — the most common species of the coffee plant — and that meeting future global Arabica demand can lead to loss of biodiversity and result in carbon emissions. In another PLOS ONE article from 2012, Davis and colleagues analyzed the potential effects of climate change on wild indigenous Arabica growth in Ethiopia, already restricted to small areas, concluding that, in the worst-case scenarios, optimal available land for Arabica production could entirely disappear by 2080. According to yet another PLOS ONE article, Jaramillo and colleagues argue that the coffee berry borer, the most important pest of coffee worldwide, has already benefited from the temperature rise in East Africa. They say that the best way to adopt to a rise of temperatures in coffee plantations could be the by introducing shade trees in sun grown plantations.

The question is if introducing shade trees will be enough. The World Bank has predicted a temperature increase of up to 3.1°C (35.78°F) by 2060 in Ethiopia, the home of the coffee crop. At the same time, extreme weather events will increase with more “hot days” and rain falls. This will not only be problematic for the survival of the coffee plant, but it is also an occupational problem when workers at coffee plantations need to work in a warmer climate. The potential health impacts of laboring in a hot climate include heat exhaustion (which reduces work capacity and labor productivity), clinical heat stroke, exacerbation of certain chronic diseases and acute fatalities. Physical work adds to the heat stress because of intra-body heat production from muscle work; greater heat impacts require higher work intensity. Since the impacts on work capacity are driven by the physiological limits of the human body, climate change will also have vast economic impacts due to a heat-induced reduction in labor productivity. As in many other countries in the region, Ethiopia is particularly vulnerable to climate change given the large proportion of the population that depends on agricultural and pastoral activities for their livelihoods. Dialogue around climate change impacts often neglects to mention the occupational aspects as well as impacts on the health of agricultural workers. These components must be taken into account when assessing future impact from a changing climate.

In a global context, climate change impacts on coffee production may seem like a narrow issue, but coffee is one of the world’s most important crop commodities, worth around $15 billion a year, and is grown by more than 26 million farmers in 52 countries. Revenue from the coffee trade is an important source of income for these countries. Coffee is not only the world’s favorite beverage, but also the second-most traded commodity after oil. Arabica coffee is by far the most significant species used in coffee production, providing approximately 70% of commercial production. In Sweden, we even like our coffee so much that when it comes to number of cups per capita, we find ourselves in the top three consumer countries in the world with a per capita consumption of 10.4 kg (approximately 3 cups a day). 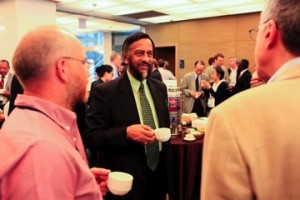 The December 2015 COP21 climate summit in Paris is an important political window for nations with a stake in coffee production to act on climate change. Since many of the world’s policymakers need their caffeine in order to “pull an all-nighter” when it comes to closing important deals, including a climate agreement, stakeholders may see the value of acting on climate change to preserve coffee bean production. If not coffee for climate change, invoking the health and economic benefits of action, as well as the Intergovernmental Panel on Climate Change, the 97 % scientific consensus, or Pope Francis encyclical should cut it. Also, even climate skeptics can hopefully share the value of getting their morning java.

So it’s definitely time to wake up and smell the coffee. Otherwise, we may risk the world as we know it, including those pure moments of a coffee break, being something of the past.