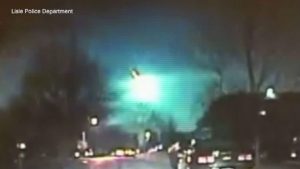 Night owls in Illinois and Wisconsin were treated to an early morning meteor. Images from police dash cams, Nest cameras and other video cams.

The things you see on Twitter! I took a peek before heading to bed, only to see that the National Weather Service of Chicago had tweeted a dashcam from an Illinois police car … showing a meteor falling from the sky.

Check out this INCREDIBLE video of the #meteor this morning as viewed from a Lisle, IL police car dash cam! Thanks to Lisle PD for sharing! pic.twitter.com/uYELKkBxRO

A meteor is a space rock—or meteoroid—that enters Earth’s atmosphere. As the space rock falls toward Earth, the resistance—or drag—of the air on the rock makes it extremely hot. What we see is a “shooting star.” That bright streak is not actually the rock, but rather the glowing hot air as the hot rock zips through the atmosphere.

Meteorites are meteors that reach the Earth’s surface; they are rare.

So I started poking around. The meteor was seen in at least two states, Illinois and Wisconsin, and perhaps Iowa and Indiana.

Check out the roof of the car at the bottom of the video. You can see the tail of the meteor.#foxvalleywi pic.twitter.com/zHpXw23sU6

Here’s another amazing dash cam video of the meteor this morning, this one courtesy of the @MGPD1895! pic.twitter.com/qH0rVNVJhY

Here is a video of the flash from the meteor seen flying over Wisconsin tonight. https://t.co/ejhsdgeqpD

At least 16 witnesses captured the 1992 Peekskill, NY, meteor on video, “making it one of the best-documented meteor strikes in history.” Pretty sure that record just turned into dust.