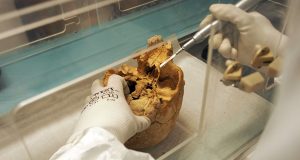 Tiny samples taken from ancient European skulls, in a process shown here, yielded enough DNA for researchers to determine that farmers and foragers interbred in three different regions from 8,000 to nearly 4,000 years ago.

Thousands of years ago, hunter-gatherers native to Europe and incoming farmers from what’s now Turkey got up close and personal for a surprisingly long time, researchers say. This mixing reshaped the continent’s genetic profile differently from one region to another.

Ancient DNA from foragers and farmers in eastern, central and western Europe indicates that they increasingly mated with each other from around 8,000 to nearly 4,000 years ago, a team led by geneticist Mark Lipson of Harvard Medical School in Boston reports online November 8 in Nature. That time range covers much of Europe’s Neolithic period, which was characterized by the spread of farming, animal domestication and polished stone tools.

The new findings lend support to the idea that Europe and western Asia witnessed substantial human population growth and migrations during the Neolithic, says archaeologist Peter Bellwood of Australian National University in Canberra. So much mating occurred over such a long time that “geneticists can no longer assume that living people across Europe are a precise reflection of European genetic history,”  he says.

Ancient Europe hosted increasing interbreeding between incoming farmers and native hunter-gatherers over several thousand years, a new genetic study finds. Genetic signs of hunter-gatherer ancestry appeared among some of the earliest farmers in Europe, including this individual found at a Hungarian site up to 7,000 years old. 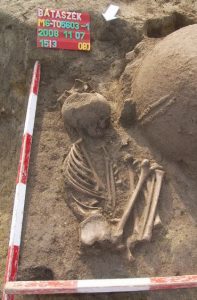 Previous studies of ancient DNA indicated that farmers in Anatolia (modern Turkey) migrated into Europe roughly 8,000 years ago. Researchers generally assumed that newcomers and native hunter-gatherers interbred at first, perhaps as a single wave of farmers moved through Europe to the Atlantic coast, Lipson says. From this perspective, foragers either joined farming cultures or abandoned their home territories and scattered elsewhere. But it now appears that, after a major migration of farmers into Europe, many groups of farmers and hunter-gatherers living in particular regions mingled to varying extents for many centuries, the researchers.

“Even though there weren’t any major new migrations into Europe after the arrival of farmers, there were ongoing ancestry changes throughout the Neolithic due to interactions between farmers and hunter-gatherers,” Lipson says. Central and northern Europeans next experienced large DNA changes at the start of the Bronze Age around 5,000 years ago, with the arrival of nomadic herders from western Asia (SN: 7/11/15, p. 11).

Despite this unexpected evidence of long-term mating among communities with different cultures and styles, the tempo of genetic change and the population sizes of farmers and hunter-gatherers remain poorly understood, says archaeologist Alasdair Whittle of Cardiff University in Wales.