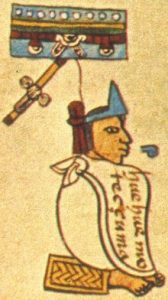 Moctezuma I in the Codex Mendoza / Wikimedia Commons

Moctezuma brought social, economical, and political reform to strengthen Aztec rule, and Tenochititlan benefited from relations with other tribes.

modern Nahuatl pronunciation, Huehuemotecuhzoma or Montezuma I (Classical Nahuatl: Motēcuzōma Ilhuicamīna [moteːkʷˈsoːma ilwikaˈmiːna], Classical Nahuatl: Huēhuemotēuczōma [weːwemoteːkʷˈsoːma]), was the second Aztec emperor and fifth king of Tenochtitlan. During his reign, the Aztec Empire was consolidated,[1] major expansion was undertaken, and Tenochtitlan started becoming the dominant partner of the Aztec Triple Alliance. Often mistaken for his popular descendent, Moctezuma II, Moctezuma I greatly contributed to the famed Aztec Empire that thrived until Spanish arrival, and he ruled over a period of peace from 1440 to 1453. Moctezuma brought social, economical, and political reform to strengthen Aztec rule, and Tenochititlan benefited from relations with other tribes.[2]

Moctezuma was the son of emperor Huitzilihuitl (meaning “Hummingbird Feather”) and queen Miahuaxihuitl. He was a brother of Chimalpopoca, Tlacaelel I, and Huehue Zaca. He was the grandson of the first ruler of Tenochtitlan.[3] His name meant “He Who Grows Angry from within His Stomach.”[4]

After emperor Huitzilihuitl’s death, Moctezuma’s brother Chimalpopoca was ruler for ten years until his assassination. During his reign, Moctezuma and his brother Tlacaelel I lead an opposition group of young nobles. This group was militant in nature and they chose Itzcoatl as the next ruler. Under Itzcoatl, Moctezuma and Tlacaelel were generals in his army.[3]

Moctezuma then was elected to power in 1440 by this group of nobles, at the age of 42, after the death of his half-uncle Itzcoatl. He held the title of “Great Speaker”. This was distinguished from the title of “Speaker” since he spoke for both the Aztecs and the other tribes under their control.

His coronation[5] was a large ceremony, involving many human sacrifices of prisoners. Moctezuma was seated on a basketwork throne and was crowned by the ruler of Texoco. His crown was a turquoise diadem known as the fire crown.[3] 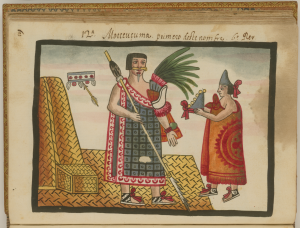 The coronation of Moctezuma, from the Tovar Codex, 1565 / Wikimedia Commons

As tlatoani, Moctezuma solidified the alliance with two neighboring states, Tlacopan (a small city-state) and Texcoco. Tlacopan, located on the western shore of Lake Texcoco, controlled 7 city-states to the northwest, while Texcoco was located on the eastern shore and rule over 9 city-states in the northeast[7]. As the two regions were added to Moctezuma’s empire, the Aztecs relied on already established city-states to increase military power. In this skillfully crafted Triple Alliance, 4/5ths of a newly conquered territory would be divided between Texcoco and the Aztecs, with the remaining 1/5 given to Tlacopan.[8]

Among the Aztecs’ greatest achievements, Moctezuma and Nezahualcoyotl of Texcoco organized the construction and completion of a double aqueduct pipe system[9], supplying the city of Tenochtitlan with fresh water. The newly adopted water source provided an ample supply of fresh water to Texcoco’s various communities, which extended over a distance of 12-kilometers from their lakeshore to the hills of Tetxcotxinco.

Early in his rule,he led a conquest against the state of Oaxaca in 1445.[10] Moctezuma also then went on to extend the boundaries of the Aztec empire beyond the Valley of México to the Gulf Coast, known as the “Sea of the Sky”, for the first time, subjugating the Huastec people and Totonac peoples and thereby gaining access to exotic goods such as cocoa, rubber, cotton, fruits, feathers, and seashells.[10] The Aztec were then known as the “Neighbors of the Sea of the Sky”, as they controlled all the territory up to the Gulf of Mexico.

As a ruler, Moctezuma faced and overcame many natural disasters. In 1446, a swarm of locusts destroyed the region’s crops[4] In 1449, Lake Texcoco flooded the city.[3] In 1450, a frost and drought again destroyed the region’s crops. These droughts and frosts continued for four years.[4] The famines resulted in some selling their children[3] or themselves[4] into slavery, and the city lost most of its population. This drought resulted in Moctezuma’s period of peace ending.[11]

After the famine ravaged through Aztec agricultural resources, a series of conflicts, known as the Flower War, involved the Triple Alliance, and the city-states of Huejotzingo, Tlaxcala, Cholula, in the Tlaxcala-Pueblan Valley of Central Mexico. Believing the famine to have occurred due to their gods’ anger, Moctezuma supported the order for an increase of human sacrifices to please them.[13] Thus, began the war to accumulate as many victims as possible for sacrifice. The war lasted until Spanish Conquest in Mexico, where Spaniards recruited enemy tribes of the Triple Alliance to conquer all of Mexico. In preparation for the war, Moctezuma would issue three declarations of war and provide weapons to the enemy region. If the last declaration was not accepted by the enemy region, then within 20 days the Aztecs would attack. 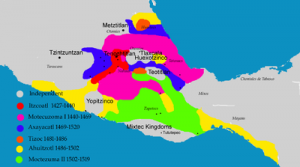 Map showing the expansion of the Aztec empire showing the areas conquered by the Aztec rulers. The conquests of Moctezuma is marked by the colour pink.[15] / Wikimedia Commons

In about 1458, Moctezuma led an expedition into Mixtec territory against the city-state of Coixtlahuaca, the pretext being the mistreatment of Aztec merchants. Despite the support of contingents of Tlaxcala and Huexotzinco warriors, traditional enemies of the Aztecs, the Mixtecs were defeated. While most of the defeated chieftains were allowed to retain their positions, the Mixtec ruler Atonal was ritually strangled and his family was taken as slaves. The Codex Mendoza records that the tribute owed by Coixtlahuaca consisted of 2000 blankets (of 5 types), 2 military outfits with headdresses and shields, green gemstone beads, 800 bunches of green feathers, 40 bags of cochineal dye, and 20 bowls of gold dust. He took many girls from Coixtlahuaca and had ten harems all to himself. He stole three of them from his dead brother Zaca.[14] Similar campaigns were conducted against Cosamaloapan, Ahuilizapan (Orizaba), and Cuetlachtlan (Cotaxtla).

Opposition to His Reign

It is reported that Moctezuma’s half brother Tlacaelel opposed his leadership in the early years. However, other historians report that he was once given the opportunity to rule and turned the opportunity down. He took over the empire in 1469 after the death of Moctezuma.[16]

While Moctezuma did lead conquests against others, he was able to maintain peace from 1440 to 1453 within his empire.[11] With this peace his government was able to enact social, political, and economic reforms.

He enacted codes, which determined what people of certain classes could wear and what their houses could look like. For example, only noblemen or great warriors could have a home with a second story. No one was allowed to have towers, because he claimed they could only be granted by the gods.

He also created legal and education policies that were determined by class. In the palace, different classes were to be received in different rooms. No mixing was allowed under the punishment of death. Only Moctezuma was allowed to give a death sentence, and all judges had to notify him of any death penalty rulings.[11] Religion was also emphasized, and religious schools were required in every neighborhood.[11]

Tlacaelel, Moctezuma’s first successor, was succeeded by Moctezuma’s cousin or son Axayacatl, who was 19 years old.[3][16] Moctezuma is also now used as a symbol of Mexican independence and resistance.[17] Moctezuma I is depicted much less than Moctezuma II in popular culture. However, one depiction is in the Sid Meier’s Civilization series. In this video game, Moctezuma is the leader of one the playable civilizations which are competing to have a successful empire. One of his unique abilities is “Gifts for the Tlatoani”, in which new resources help improve the happiness of the society as well as its military power. In game, the civilization is known for aggression and expansion.[18]

Montezuma is also seen as a “hero-god” by several Southwestern Native American tribes, especially the Tohono O’odham and Pueblo. His legend is somewhat distinct from the actual historical figure, but shares elements of him and likely originated with tales of the historical figure.