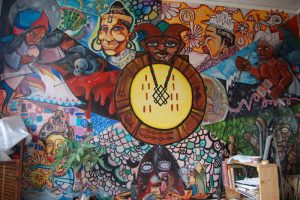 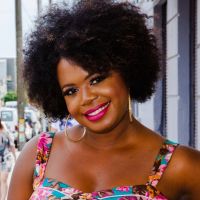 Let’s start off with gratitude: Thanks to the Trump era, the hypocrisy of evangelical Christians has become obvious. There should be a gold medal awarded for the outrageous feats of mental gymnastics performed by “family values” champions who condemn the LGBTQ community one minute and vote for accused sexual predator Roy Moore the next. Or pastors who will shout from their pulpit about the dangers of idolatry one Sunday, then unironically lambast Colin Kaepernick for disrespecting the flag.

Many Americans have winced at the sanctimony among the Christian community, as more people steadily move away from church. Recent pollshave shown that a fifth of Americans don’t have any religious affiliation at all, a number that is steadily growing every decade. Although black Americans still tend to be more religious than the general population, those under 30 are three times as likely to avoid religious affiliation as black people over 50. I am one of them.

But even though more young black people are leaving organized religious institutions, that doesn’t mean we’re not spiritual. Steadily, it seems like when we move away from the Christian church, we move towards less organized spiritual practices based on traditional African spirituality. There have been no knocks on the door, no pamphlets, no billboards, no late-night hotlines, no viral video campaigns. And yet, an unnamed spiritual movement reimagining African tradition and nature-centered spirituality has been growing among young black Americans.

Traditional African spirituality is an umbrella term for an assortment of beliefs that may or may not fit into a particular dogma. It can be Ifá, Vodou, Santería, Candomblé or other variations of Yoruba religious traditions, coming from the West African region of Benin, Togo and and Southwestern Nigeria. Deemed to be over 10,000 years old, the commonality of the Yoruba traditions is a reverence for spirits that reflect aspects of nature or Orishas, as well as one’s ancestors. Integration of African religious tradition can manifest as ancestor reverence, nature-based spirituality, or general witchcraft. There is a growing focus on beliefs outside of the Judeo-Christian-Islamic God, and the effects of colonialism.

Spirituality has long been used as a tool by the black community to cope and make sense of the oppression we have endured. Evidence of our growing connection to African spirituality is sprinkled everywhere, from our pop culture—Beyonce’s Lemonade had many nods to African spirituality—to secret Facebook groups, and even in our activism. Weaved within the movements for black lives are spiritual and ritualistic resources such as reiki, acupuncture, sage, and herbal tinctures to increase self-care and tend to grief and trauma. Changes in our understanding of oppression brings new depths in understanding our spirituality. We have learned not only the importance of reclaiming our time, but also our history, our spirits, and our joy.

For me, the spiritual journey has been a very solitary one until recently. At first it felt like I was the only person I knew who was skeptical of Christianity and longing to know more about African traditional spirituality. Soon, I saw how wrong I was.

Oakland, California is a city with a rich history of black pride, scholarly research, and radicalism stretching back to the Civil Rights movement and later the Black Panthers. There are emblems of African spiritual tradition everywhere—murals of the orishas, colors, names, and symbols in African Heritage Cultural centers and on neighborhood walls.

In north Oakland, there’s a store called Ancient Ways, which has stood near one of the busiest intersections for more than 28 years. A self-described “pagan metaphysical store,” the shop offers its patrons access to orisha candles, oils, herbs, stones, and cashiers giving great advice for setting up an ancestral altar. The front windows are adorned with Black Lives Matter and “Capitalism is a Pyramid Scheme” signs, along with dried flowers, watercolor paintings, and candles. Black patrons go to Ancient Ways for the necessary supplies and books for ceremonies and honoring the dead. One block away is a black hair supply store, a payday loan store, and a large black church. 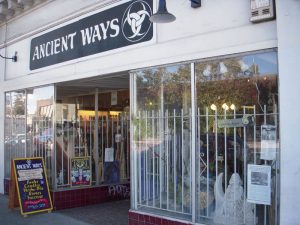 The Oakland store is just one marker of the growing embrace of non-Christian spirituality among black folk. Jamila Cain in Washington, D.C., heads up Black Femme Witches Brew, an online and in-person safe space for black people who are searching for what she calls “remember” traditional spiritual practices.

“It was very uncomfortable for me to see that white people had become the voice of indigenous spiritualities,” she says. “I knew that there were black women and black feminine of center people who were interested in African spirituality and healing modalities. I wanted to create a way where we can explore that in safe spaces.”

Cain created the platform four years ago, but she has recently seen an increase in people from across the country, hungry for more information.

Patrice Cullors, a co-founder of Black Lives Matter, is a queer polyamorous practitioner of Ifá, a religious tradition from Nigeria. Movements such as Black Lives Matter have re-centered queer and trans women, bringing awareness to the internalized sexism, transphobia, and racism in all systems—including the church. One must, if they are honest, look at how Christian culture continues to uphold patriarchy, rape culture, and white supremacy—even within black churches. Doctrines that push respectability versus self-acceptance often focus on appearances and decorum, rather than the necessary self-awareness to create systemic change.

Writer D. Danielle Thomas addresses some of these concerns on the website Unfit Christian, a blog that focuses on faith and intersectional identities of gender, class, and race. She explores why black young women in particular are leaving the church in the article Why Black Millennials Are Leaving The Church.

“For those of us exiting your pews, we refuse to have our entire value as women be based on what lies between our thighs,” she writes. “We’re battle weary of your analogies of our bodies to cars and other inanimate objects.”

The objectification of women within the church, combined with shaming purity culture and a lack of sex and consent education, influences a broader culture that makes things like the #MeToo movement necessary. It’s a dynamic acknowledged by the recent #ChurchToo response.

welp. in case you are baffled at the defense of Moore in Alabama….peep the #ChurchToo hashtag. hollywood and DC aren’t the only institutions that need retooling. that hashtag thread explains EVERY christian head scratching moment I’ve ever had.

John Henrik Clarke, a mid-century scholar who pioneered pan-African studies during the Black Power movement, once asked, “How can a slave and its master serve the same God?” Decades later, this question still rings true in the oppressive narratives pushed from the pulpit.

I can’t, either. As much as I agree with some of the criticisms of Christianity, I’m aware that it’s #NotAllChristians and new, more progressive and responsive churches are growing. It’s just that I feel more called to these older, more nature-based traditions than I do Christianity.

Discovering these practices doesn’t feel like something new; in fact, it feels like returning to something that was lost. I feel the pull of traditions that, when practiced, are like remembering a forgotten memory.

I started exploring African religious traditions towards the end of my high school years. As the years went by, I sought out spiritual experiences like shell readings, a type of divination using cowry shells. I traveled to Brazil for months to learn more about Candomblé, a religious tradition brought over by enslaved captives from West Africa. I took part in ritual ceremonies that emphasized the importance of dance in spiritual connection.

A friend had gifted me with Jambalaya, a book written by Luisah Teish. It brought meaning and understanding to so many things that I always felt, but never knew. It highlighted the historical and spiritual relevance of New Orleans, Marie Laveaux, and African spirituality’s ties to feminist and black radical thinking. It also was the first book I’d read on indigenous or African spirituality that was actually written by a black woman. She also talked about life in Oakland, and I felt we were kindred. This woman had left rural Louisiana and become more spiritually fulfilled in her West Coast life, and I found I would explore in the same way.

“Exploring spirituality is the apex of freedom,” says LaShunda Thomas, an artist and the owner of Oshun’s Garden, a store where she sells accessories inspired by the Ifá Orisha tradition of West African spirituality. She sees this awakening happening even in her Bible Belt hometown of Jackson, Mississippi.

“A lot of black people, particularly women, are allowing themselves to be free enough to explore and ask questions,” she says. She sees a connection with nature as intrinsic to this transformation. “When you look at the Dakota Pipeline situation, so many people were called to put their blood, thoughts, and energies to make sure that would not happen. Even though that was eventually defeated, I think there is a growing awareness of people being more mindful that this is the earth we have to share.”

“Spend some time on a hike, or by the ocean, or staring at the stars,” she says. “We were told we shouldn’t like these things, and there is a historical trauma of a lot of things that happened to black people in nature,” like lynchings or the brutality endured by runaway slaves. “But there is also a connection there that has been passed down, even if you don’t know it.”

In a neverending, increasingly upsetting news cycle, many feel it’s important to look back into their personal history to gain strength and guidance from those who came before them.

“I would tell anyone interested in finding their path to ask their ancestors,” says Tory Teasley, a singer and performer in Oakland.

He believes these traditions can help us resist and thrive in the current political atmosphere of rising white nationalism and regressive politics.

Hearing Teasley’s words, I couldn’t help but think back to the downpour of disheartening news over this past year—from California wildfires that endangered the lives of many of neighbors and friends, to the catastrophic flooding that destroyed homes and businesses in the South, to watching Nazis march through the streets of Charlottesville. Through all of that, the thing that has kept me grounded is a daily practice of lighting candles on my alter and connecting with my ancestors. They, of course, have been through worse.

Originally published by Splinter News under a Creative Commons license from Gawker Media.