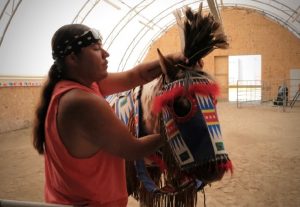 “Greg is the first Native man I ever heard talk in such depth about what happened to him. He let us know that we can no longer be silent.”

All photos by Mary Annette Pember 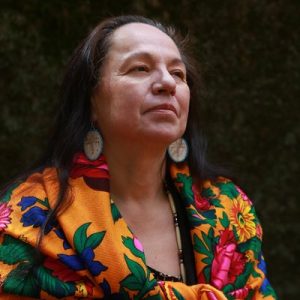 By the numbers, Native Americans reliably top lists of violence, poverty, unemployment, and addiction in the United States. Taken alone, the data paint a dismal picture of intractable, inescapable poverty.

But on reservations and in communities, the picture was a whole lot more complex in 2017.

As I have for several years, I spent most of 2017 traveling through Indian Country for the stories I was covering. An old-school journalist, I travel simply and close to the ground; I keep a loose schedule so that stories have a chance to emerge. I spend many hours just chatting with folks.

In 2017, I was gifted with a glimpse of the people behind the damning data. Their lives were far grander and more complex than I imagined. This year, I had a front row seat to the quiet tactics many Native folks employed to protect and nurture each other and their communities. I met people who reminded me that Natives are the original observational scientists, adept at on-the-fly invention. The people I met harbored few illusions about material wealth; rather, they embraced the nourishing spirituality of their cultures.

In terms of data, I expect that 2018 may be a little worse than usual given the current administration’s lack of support for Indian programs. But Native folks will continue, as they’ve always done. They will reinvent and they will laugh—my God will they laugh! Like always, they’ll laugh at themselves, their damn luck, and the darkness, until they knock a hole in it. That’s resilience. And here is what that looks like. 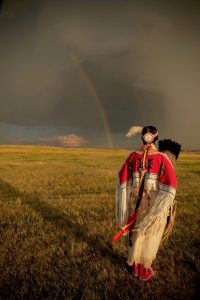 Natalie Hinhan Luta Hand, activist, journalist, and traditional dancer on the Pine Ridge reservation in South Dakota, looks out over the prairie at an approaching thunderstorm. Hand is a local organizer for Conscious Alliance, an organization that collects food at concerts and music festivals and distributes to communities in need. Hand coordinates the Conscious Alliance food pantry on Pine Ridge where folks can get food. 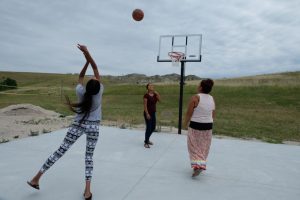 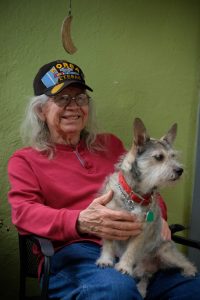 In 2017, I fulfilled my longtime dream to meet Basil Brave Heart, a Lakota teacher and healer whose story of recovery from alcohol has been a precious inspiration for me. I first heard him speak on Krista Tippett’s radio show “On Being” back in 2006.

We sat together on his porch, under the guard of his dog Charles, and visited. Sober for over 30 years, Brave Heart spoke of how his Lakota Native spirituality influenced his recovery. He describes indigenous spirituality as a “higher vibrational understanding of the divine.”

Greg Grey Cloud, Lakota, dresses Red Clouds of the Sunka Waken Oyate (“horse nation”) at the Tiwahe Glu Kini Pi (“bringing the family back to life”) equine therapy ranch near the Rosebud Reservation in South Dakota. Ranch foreman Grey Cloud helps coordinate therapy for children who have been sexually abused. Grey Cloud gained strength and healing from the horses and recently began publicly sharing his own horrific story of being sexually assaulted at age 9 by several teenagers. “Greg is the first Native man I ever heard talk in such depth about what happened to him. He let us know that we can no longer be silent,” says Amanda Takes War Bonnet, public education specialist for the Native Women’s Society of the Great Plains. 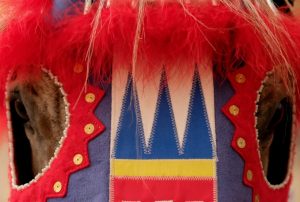 Red Clouds of the Sunka Wakan Oyate (“horse nation”) proudly wears his regalia. According to Greg Grey Cloud, foreman at the Tiwahe Glu Kini Pi (“bringing the family back to life”) equine ranch, Lakota traditionally dressed their horses in regalia when facing challenges or adversaries. Therapists began teaching youth through the ranch’s programs to recreate the regalia as a means to connect them with their culture and spirituality. 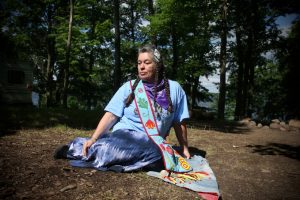 The power of Ojibwe women as represented by Babette Sandman, who is White Earth Ojibwe from Minnesota. Sandman, or Makada Miigwan (“Black feather”), credits her Ojibwe spirituality for guiding her life. “The ancestors taught us that there is some kind of energy that comes right out of the Earth, into our feet and into our hearts if we take time to put down tobacco and listen,” she said. 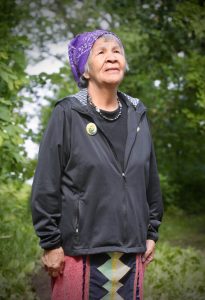 Mindimooyenh, or one who holds things together, is the Ojibwe word for woman elder. Dora Mosay Ammann, 76, of the St. Croix Ojibwe tribe of Wisconsin, is the “boss lady” for her lodge. Her Ojibwe name is Ashazhawaagiizhig (“Crossing Sky Woman”). “We were put here to keep our ceremonies alive. Without our spirituality, we have nothing!” she said. 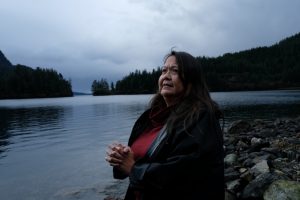 Louise Brady, Tlingit member of the Kiks.ádi clan of Sitka, Alaska, is an activist working to bring awareness of Tlingit culture and language to her community. 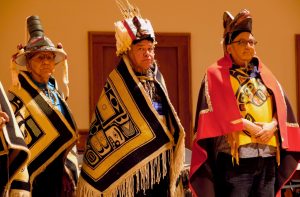 Members of the Tlingit tribe welcome back sacred items restored to the tribe during the annual Clan Conference in Sitka, Alaska. 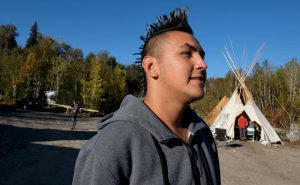 Curtis Pine, 17, of the Serpent River Ojibway tribe in Ontario, is learning to speak his language; he attends language and culture camps in nearby Elliot Lake.