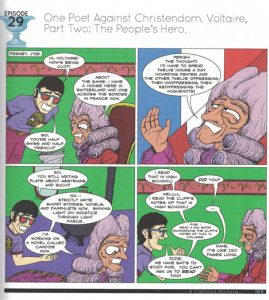 Curious Dave, protagonist of an amusing and informative new book called The Cartoon History of Humanism, Vol. 1: Antiquity to Enlightenment, wanders through time and space to converse with the pioneers of humanist philosophy. On his journey, he meets famous skeptics, atheists, writers, thinkers and hedonists who have all advanced human thought away from the mystical and toward the rational.

We encounter such familiar individuals as Cicero, Ibn Rushd, Boccaccio, Leonardo da Vinci, Erasmus, Hume and Voltaire; as well as Héloïse d’Argenteuil, Pietro Pomponazzi, Isabella d’Este, Aphra Benn, and Julien Offray de la Mettrie. Some of these women were proud, lusty ladies who openly scoffed at the whole notion of sin. Volume 1 features 32 “episodes” plus a bonus. Volume 2 will bring us through the 19th and 20th centuries – plus, who knows, maybe the 21st?

But Dave’s time-travel adventure is not truly the centerpiece of this book. The brief two-or-three page synopses of the interviewees’ lives that follow each one-page, four-panel cartoon provide the meat of this history. Dale Debakcsy’s writing is informed and personal, fresh and elegant. Only rarely does he bog down in philosophical lingo. Presented in short, bite-sized bursts of biographical flavor in almost chronological order, these episodes do not necessarily need to be consumed sequentially, but may be sampled at will. You can return to any episode if you need a quick refresher. What he has to say about some of his subjects – Machiavelli, for example – may pleasantly surprise you.

Debakcsy offers a short epilogue after each episode, discussing his sources and recommended further reading. This book, and the volume to come, are clearly evidence of a love of reading, of ideas, and of human progress.

His stories are framed as struggles against the authority of the church. The church controlled almost every aspect of life for millennia. If you wanted to investigate science or medicine, or practice free love, or challenge the nature of politics and the state, or question the existence of the supernatural, you came up against traditions and laws with biblical or other bases in myth and superstition. The very role of the King was reinforced by his subjection – at least in theory and in certain times and places – to the will of the Pope, who designated himself the vicar of God.

At least a dozen of the author’s characters — who in the author’s words “nudged up the boundaries of human potential” — would make suitable subjects for playwrights, screenwriters and librettists for musical theatre.

As a sample of Debakcsy’s writing, consider this first paragraph to Episode 20 about “the most dangerous man in Europe”: “By 1670, all of the pieces of modern humanism were in place, waiting for one guiding intellect to join them together at last for a complete assault on the ramparts of organized religion. Abelard had cast doubt on the consistency of the church fathers, Averroes and Albertus Magnus had attacked the cult of theological authority, Pietro Pomponazzi had dismantled the mortal soul, Paolo Sarpi had defanged the temporal authority of the church, and Thomas Hobbes had advocated for a vigorous materialism that rewrote the meaning of good, evil, heaven, and hell. Each had a profound impact on the reordering of some aspect of Europe’s religious life, but one man was feared as the greatest threat to the very foundation of religion itself since the dawn of recorded history: Baruch Spinoza (1632-1677), the architect of atheism.”

The historian frequently connects his subjects to discoveries that came centuries later. Speaking of the Roman thinker Lucretius, “the keystone of Materialism,” he calls him a “prime example of how staggeringly far a single mind can go in understanding the universe aided by nothing but the proposition that everything is composed of atoms. His masterpiece, De Rerum Natura, published over two thousand years ago, is an astonishing encapsulation of prescient hyper-modern insights into the physical world. From genetics to cosmology, optics to neuroscience, Lucretius’s ideas are correct freakishly often.”

Another central figure in Western thought is the Arabic scholar Ibn Rushd (1126-1198), who worked in Córdoba, Spain. According to Ibn Rushd, “the true infidelity was disobeying God’s command to investigate reality, to be given a divine instrument like the brain and then not use it to its fullest.” “In him,” Debakcsy continues, “the three great religious traditions of the West met with a full accounting of the wisdom of antiquity and found a synthesis that would define the Western intellectual project for centuries to come, and a tension that would set the stage for the great rationalist turn that we are still enjoying. In the near millennium since his death, the only figure of remotely comparable stature in terms of philosophical impact on the structure of world thought is Karl Marx.” (We will surely hear more about him in Volume 2.)

The only weakness of the book, unfortunately, is the cartoons themselves. Some graphic content is, of course, most welcome in such a heady, thought-filled text. But the cartoons – and indeed the whole time-travel excursion theme – strike me as a clever first idea that might have been discarded on further reflection. The artist does not show sufficient skill at portraiture to effectively differentiate the many distinct physical types and individuals in the book, so except for robes and wigs and some incidental props, there is a sameness about them all that disappoints. The conversational speech bubbles in the cartoons are too often forced, elliptic and tedious.

One other question I wish Debakcsy had dealt with a little better is the dissemination of ideas in the pre-modern era. If someone wrote a “book” in the centuries before the printing press, how did its content become known? How familiar were the author’s contemporaries, and subsequent generations, with all this evolving progressive thinking? Without comprehensive, cumulative passing on of all this collective wisdom, most people must have been largely ignorant of it, still lashed to the dogmas of those who ruled them. Even today, with all the available means of spreading information throughout the universe, many communities remain practically immune to rational thought.

Discussing the French encyclopedist Denis Diderot (1713-1784), whose work of gathering and categorizing all knowledge of the world anticipated the French Revolution, Debakcsy suggests that characters in Diderot’s literary works “re-enact dramatically the conversation that I think every humanist engages in privately – what to do with one’s self in a doomed world.” The implications for every sentient human being of knowing what we know affect every action we take.