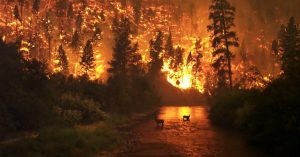 Last year’s record heat was fueled by a combination of the effects of global warming and one of the strongest El Niño events on record since at least 1950. (Photo: Project LM/flickr/cc)

‘The impacts of climate change are no longer subtle. They are playing out before us, in real time’

Environmental records of all kinds are being shattered as climate change takes effect in real time, scientists warned on Tuesday.

The National Oceanic and Atmospheric Association (NOAA) released its annual State of the Climate report with the dire warning that 2015 was the hottest year on record since at least the mid-to-late 19th century, confirming the “toppling of several symbolic milestones” in global temperature, sea level rise, and extreme weather.

“The impacts of climate change are no longer subtle,” Michael Mann, a leading climate scientist at Penn State, told the Guardian. “They are playing out before us, in real time. The 2015 numbers drive that home.”

Last year’s record heat was fueled by a combination of the effects of global warming and one of the strongest El Niño events on record since at least 1950, NOAA said.

“When we think about being climate resilient, both of these time scales are important to consider,” said Thomas R. Karl, director of NOAA’s National Centers for Environmental Information. “Last year’s El Niño was a clear reminder of how short-term events can amplify the relative influence and impacts stemming from longer-term global warming trends.” 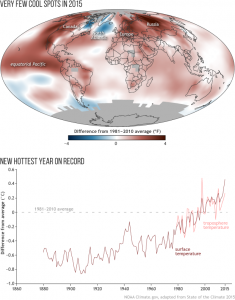 Global surface temperature in 2015 easily beat the previous record holder, 2014, for the title of warmest year in the modern instrument record. The long-term warming trend of the surface and lower atmosphere continued. (Image: NOAA)

Meanwhile, the Arctic continues to lose sea ice, impacting marine life by forcing walruses to shore and sending fish populations out of the region; harmful algal blooms spread in the northeast Pacific; and tropical cyclones worldwide were well above average, NOAA said.

The report is released amid a rash of climate-related nightmares taking place around the world. In Maryland, historic rainfall killed multiple people this week; in Siberia, melting permafrost released long-dormant deadly anthrax into the air, sickening several people and killing thousands of reindeer; in the Middle East last week, scorching temperatures smashed historic heat records for the Eastern Hemisphere.

Kate Willett, a senior scientist at the U.K.’s Met Office, told the Guardian on Tuesday, “Looking at a range of climate measurements, 2015 was yet another highly significant year. Not only was 2015 the warmest year on record by a large margin, it was also another year when the levels of dominant greenhouse gases reached new peaks.”