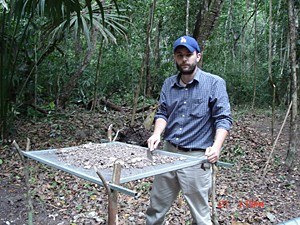 By Dawn Fuller
University of Cincinnati

University of Cincinnati research at the ancient Maya site of Medicinal Trail in northwestern Belize is revealing how populations in more remote areas – the hinterland societies – built reservoirs to conserve water and turned to nature to purify their water supply. Jeffrey Brewer, a doctoral student in the University of Cincinnati’s Department of Geography, will present[ed] his findings on April 11 [2013], at the Association of American Geographers’ annual meeting in Los Angeles.

Brewer’s research, titled “Hinterland Hydrology: Mapping the Medicinal Trail Community, Northwest Belize,” continues a UC exploration of the ancient Maya civilization that has spanned decades. The site for Brewer’s research, which was primarily occupied during the Classic Period (AD 250-900), functioned as a rural architectural community on the periphery of the major ancient Maya site of La Milpa.

Brewer says this smaller, remote settlement lacks the monumental architecture and population density typically associated with the major Maya sites, but shows similar, smaller-scale slopes, artificial terraces and water reservoirs  that would have been utilized for farming and water management. 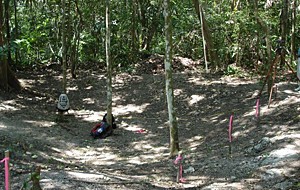 Pre-excavation photo of the depression (aguada).

Brewer ‘s discovery of artificial reservoirs – topographical depressions that were lined with clay to make a water-tight basin – addressed how the Maya conserved water from the heavy rainfall from December to spring, which got them through the region’s extreme dry spells that stretched from summer to winter. “They also controlled the vegetation directly around these reservoirs at this hinterland settlement,” says Brewer. “The types of lily pads and water-borne plants found within these basins helped naturally purify the water. They knew this, and they managed the vegetation by these water sources that were used for six months when there was virtually no rainfall.”

Without that system, Brewer says the smaller, more remote settlement would have been more dependent on the larger Maya sites that ran a larger water conservation system.

Brewer has conducted research at the site since 2006, including spending two years of intensive surveying and mapping of the region. Future research on the project will involve the completion of computerized mapping of up to 2,000 points of topography – distances and elevations of the region in relation to water sources, population and structures. Brewer says he also wants to continue exploring the construction and management of these hinterland water systems and, if possible, gain a better understanding of what knowledge about them might have passed back and forth between settlements. 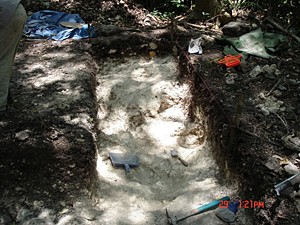 A 1×2 meter unit (sub-operation) from the aguada, showing excavation below present ground surface to the plaster-lined bedrock (limestone) layer.

Funding for the research project was supported by the Charles Phelps Taft Research Center in the McMicken College of Arts and Sciences and UC International.

The Association of American Geographers (AAG) is a nonprofit scientific and educational society that is dedicated to the advancement of geography. The annual meeting features more than 6,000 presentations, posters, workshops and field trips by leading scholars, experts and researchers in the fields of geography, environmental science and sustainability.

Brewer is presenting at a conference session that focuses on geospatial and geotechnical tools and methods that can be used to address questions of archaeological significance.