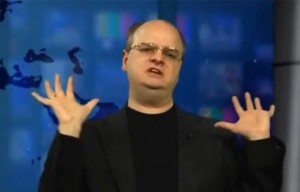 Ted Cruz is a dangerous extremist who regularly surrounds himself with equally deranged right-wing loons. Case in point — his bragging about receiving the endorsement of Colorado Rep. Gordon Klingenschmitt . That’s not all, either. Klingenschmitt is actually on Cruz’s Colorado team of leaders for his presidential campaign.

Nick named “Dr. Chaps,” this particular character is not just a Colorado State Representative. He is also a certifiably crazy preacher. In case you’ve managed to miss Klingenschmitt’s many, many controversies, here’s a rundown of some of his more outrageous antics, complete with video proof.

In 2006, Klingenschmitt was a chaplain in the U.S. Navy. However, he got himself kicked out for appearing at a right-wing political rally in his military garb, which is against policy. After that, he became a notoriously extremist preacher and far-right lunatic activist. Instead of admitting that he f*cked up, Klingenschmitt instead insisted that he was being attacked because he is a Christian — complete with the ludicrous claim that God made a hurricane happen because of the military’s persecuting him for his beliefs.

Two years ago, the good people of Colorado, likely oblivious to this loon’s antics, elected him as a state representative. That is when the crazy really started to show. He didn’t even make it a year before he was forcibly removed from the House Health, Insurance and Environment Committee after going on his “Pray in Jesus Name” program, and saying that a viciously violent attack on a pregnant woman in which her fetus was removed from her womb was punishment for America’s legalization of abortion. Here is video of that rant:

This man is also a self-identified exorcist, and he once tried to perform an exorcism on President Obama. Here is a report from Rachel Maddow on that crazy story:

Unsurprisingly, Klingenschmitt is also viciously anti-gay, and says that the government should discriminate against gay people because they will all burn in hell. He admitted to once attempting a cleansing of a woman of the” foul spirit of lesbianism.” Here is video of some of Klingenschmitt’s insane and foul views on LGBT people:

And finally, Klingenschmitt also insists that Jesus will overturn gay marriage rulings, and that judges who uphold them are “imposing the devil’s law upon people.” As for the repeal of “Don’t Ask, Don’t Tell,” this idiot says that gay people should not be able to be soldiers because of “taking breaks on the combat field to change diapers all because their treacherous sin causes them to lose control of their bowels.”

Now, bearing all of this in mind, here is what the #2 frontrunner for the GOP presidential candidate has to say about Klingenschmitt’s endorsement, via Right Wing Watch :

“I am honored to have the support of so many courageous conservatives in Colorado,” Cruz said in a press release celebrating the formation of “his Colorado Leadership Team with the endorsement of 25 current and former elected officials and key grassroots leaders,” including Klingenschmitt.

If this doesn’t tell you what kind of president Ted Cruz would be, I don’t know what will. He might be smart enough not to say this stuff so blatantly himself, but if he didn’t share these same extreme views, he wouldn’t surround himself with these people.

Be afraid, be very afraid of the possibility of a President Ted Cruz.