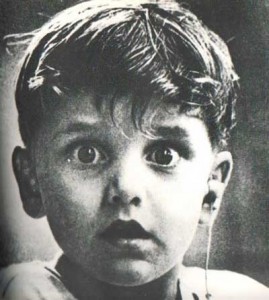 I wanted to know all about everything when I was a kid. I was an inquisitive child. The will to knowledge took root well before I was in any real position to pursue it. I remember, as a child, being conscious of a realm of adult understandings that I just didn’t have access to. There was a universe of truth and wisdom beyond my ken, and it fascinated me.

Things are different for kids today. Thanks to the internet, the truths of adult existence are only a mouse-click away. But I didn’t have recourse to instant internet gratification. I was left to think about things. My search for knowledge, as I travelled through childhood and teenagerdom, led me to dwell on the weightier things in life. Intuitively, I knew that many of the adult things beyond my experience were sombre, perhaps even dreadful, matters. The more that I reflected on these matters, the more I became a sombre person myself. I was weighed down by what I knew. I stared too long into the abyss and I started to see the abyss in me.

This was before I read Nietzsche. I started university later than most, at the age of 24. Attending philosophy classes and reading Nietzsche was a revelation for me. I had a Damascus road experience – broke with much of my past life, and devoted myself to philosophy broadly.

Looking back, I can see there was a spiritual transformation that came along with this as well. I went from being a camel to a lion. I transitioned from the first to the second phase of Nietzsche’s “three metamorphoses.”

I had become a camel, of sorts, by allowing my naive quest for knowledge and wisdom to lead me into the darkest and most disturbing corners of existence. Perhaps we inevitably become camels when we take on the labor of philosophical thinking. Eager to prove ourselves capable of embracing the truth, we seek out the heaviest and most burdensome insights, and force ourselves to dwell on them as a rite of passage. “What is heavy? Thus asks the weight-bearing spirit; thus it kneels down like the camel and wants to be well laden.” Nietzsche describes the camel spirit as a collector of burdens, conquests, and scars. The camel asks: “What is heaviest … that I may take it upon me and rejoice in my strength” (Z, 54).

Camels can carry great weights and survive in the desert. But the weighted individual is inevitably taxed by their burden. Over time, they run the risk of being poisoned by bitterness, despair, and the spirit of revenge. If the camel does not become a lion, the seeker will be ruined by their quest. It is always in the “loneliest desert [that] a second metamorphosis occurs, the spirit here becomes a lion; it wants to capture freedom and be lord in its own desert” (Z, 54). This is a fair description of the metamorphosis that I underwent in my university years, which were a thrilling period of self-discovery and actualization.

Reading Nietzsche changed my life. If I had never read Nietzsche, I would have remained a camel personality all my days.

What does it mean to be a lion? The metaphor speaks for itself. The lion is the “king of the beasts.” The lion spirit says “I will” – and that is the whole of the law. The camel becomes a lion when the subject of spiritual transformation, having ventured into the desert of human expectation, discovers that “God is dead” and surmises that everything is permitted. In this moment, the individual realizes that there is nothing to forbid them from creating their own values, imposing their own will upon the world. But, in the desert of the real, the lion encounters a dragon, and “Thou Shalt” glitters on its scales. The dragon is Nietzsche’s image of societal norms. In the lion stage, the subject of spiritual transformation must engage the dragon in mortal combat. One needs to be a lion in spirit to defeat the law of “Thou Shalt” and affirm the conditions of one’s flourishing.

There is no happiness in fighting dragons all one’s life, however. To complete the three metamorphoses, the lion must become a child. ‎Maturity, for Nietzsche, means rediscovering the seriousness one had as a child at play.

A child-like spirit is vital to happiness, health, and well-being. “The child”, Nietzsche says, “is innocence and forgetting, a new beginning, a sport, a self-propelling wheel, a Sacred Yes” (Z, 55). The lion becomes a child when the individual who says “I will” ceases to affirm their values contrary to the law of “Thou Shalt”, and affirms them instead “for the sport of creation: the spirit now wills its own will, … its own world” (Z, 55). Life is no longer a reactive struggle to defeat other forces. Life is a celebration of one’s powers – a sustained act of pure affirmation. The child-like spirit knows the joy of life and the innocence of perpetual creation.

Philosophy helped me evolve from a camel to a lion. I’m still working on becoming a child. It is a long way back to the beginning of one’s life. But this is where I’m headed. Nietzsche was wrong about many things. But he was right to insist that a light, innocent, affirmative approach to life is vital to spiritual flourishing and creative existence as well.