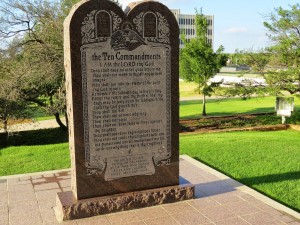 The Oklahoma House of Representatives has passed a measure intended to restore the Ten Commandments monument that was ordered removed in a court ruling.  The measure will likely pass the state’s Senate and seeks a vote from the people to abolish an article of the state constitution that prohibits state funding of any religion.

Think about that.  Really think about it, without this monument in mind.  The state will no longer be prohibited from providing funding for religious organizations and purposes.  That should terrify anyone.

This will be headed to court if it passes.  State congressional houses and even a majority vote by citizens do not have the authority to usurp the United States Constitution, and this is a clear violation of the first amendment.  The minority has a right to be protected from the whim of the majority, precisely as our Founders intended in the system they designed.

Another problem then exists, because you can be sure Satanic churches will then demand their own Baphomet monument there as well.  The state will have no option other than to allow it.

Perhaps one day various religious people will cease demanding their monuments and beliefs be represented above all others.  Until then, these battles will have to be fought.