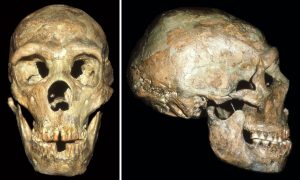 The skull of a Neandertal known as Shanidar 1 show signs of a blow to the head received at an early age. (Photo: Courtesy of Erik Trinkaus)

An older Neandertal from about 50,000 years ago, who had suffered multiple injuries and other degenerations, became deaf and must have relied on the help of others to avoid prey and survive well into his 40s, indicates a new analysis published Oct. 20 in the online journal PLoS ONE. 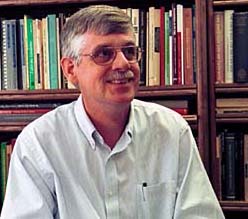 “More than his loss of a forearm, bad limp and other injuries, his deafness would have made him easy prey for the ubiquitous carnivores in his environment and dependent on other members of his social group for survival,” said Erik Trinkaus, study co-author and professor of anthropology in Arts & Sciences at Washington University in St. Louis.

Known as Shanidar 1, the Neandertal remains were discovered in 1957 during excavations at Shanidar Cave in Iraqi Kurdistan by Ralph Solecki, an American archeologist and professor emeritus at Columbia University.

Previous studies of the Shanidar 1 skull and other skeletal remains had noted his multiple injuries. He sustained a serious blow to the side of the face, fractures and the eventual amputation of the right arm at the elbow, and injuries to the right leg, as well as a systematic degenerative condition. 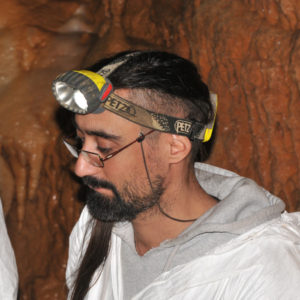 In a new analysis of the remains, Trinkaus and Sébastien Villotte of the French National Centre for Scientific Research confirm that bony growths in Shanidar 1’s ear canals would have produced profound hearing loss. In addition to his other debilitations, this sensory deprivation would have made him highly vulnerable in his Pleistocene context.

As the co-authors note, survival as a hunter-gatherer in the Pleistocene presented numerous challenges, and all of those difficulties would have been markedly pronounced with sensory impairment. Like other Neandertals who have been noted for surviving with various injuries and limited arm use, Shanidar 1 most likely required significant social support to reach old age.

Two views of the ear canal of the Neandertal fossil Shanidar 1 show substantial deformities that would likely have caused profound deafness. (Photos: Courtesy of Erik Trinkaus)

“The debilities of Shanidar 1, and especially his hearing loss, thereby reinforce the basic humanity of these much maligned archaic humans, the Neandertals,” said Trinkaus, the Mary Tileston Hemenway Professor.