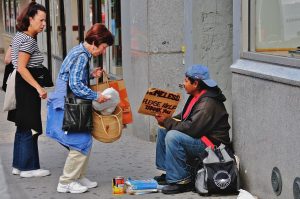 How many times do we wonder, ‘what’s the right thing to do’? Ed Yourdon from New York City, USA (Helping the homeless Uploaded by Gary Dee, via Wikimedia Commons 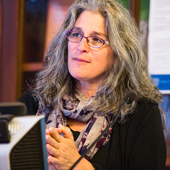 Most of us are faced with ethical decisions on a regular basis. Some are relatively minor – perhaps your cousin makes a new recipe and it really doesn’t taste good, and you have to decide whether to tell the truth or a little white lie so as not to hurt her feelings.

Others are weightier – should you blow the whistle when you discover that your co-worker is behaving in ways that could jeopardize everyone at your workplace? Should you forego a relaxing vacation and instead donate the money to a worthy cause?

For thousands of years, philosophers have debated how to answer ethical questions, large and small. There are a few approaches that have withstood the test of time.

Doing the most good

One approach, which we often use in our day-to-day lives even if we aren’t aware that it is a type of ethical deliberation, is to figure out what the consequences of our actions might be and then determine if one course of action or another will lead to better outcomes. In the policy context, this is often referred to as a cost-benefit analysis.

Utilitarianism is the primary version of this ethical system. Its most noted living defender, philosopher Peter Singer, has made compelling arguments about how we should decide what to do. He argues that when we can do something to promote the well-being of others, whether they are near or far, human or nonhuman, at relatively little cost to ourselves, that is what we should do. 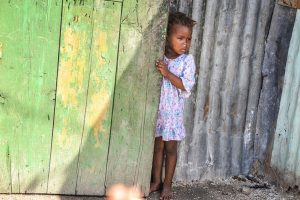 Should an individual forego a vacation to help fight global poverty? Feed My Starving Children (FMSC)

For example, across the globe children are suffering and dying from easily preventable diseases. Their lives could be saved if those of us in wealthier countries gave just a little bit of our wealth to organizations fighting global poverty.

Perhaps people could go on less expensive vacations or bring lunch from home rather than eating out and then donate the money saved to help those in need. The suffering that could be prevented would greatly outweigh the slight loss of happiness that such luxuries provide.

But why stop at giving up a fancy vacation? Why not forego all travel for pleasure? Surely that could do much more good. In fact, why not forego having children or donate one of our kidneys to someone in need?

When I raise these possibilities with my students, they often complain that this is going too far. So I push the examples to an extreme to try to get clearer about what is wrong:

Imagine a person in a hospital recovering from knee surgery whose organs happen to match three people who just were rushed into the emergency room after a car accident. The three people need a heart, a lung and a liver.

Imagine further that the person recovering hears the family members of those in the accident crying, and the person asks the doctor to take his heart, lung and liver to save the three people. A doctor wouldn’t do that – it is unethical to kill one person to save three people. But why? It would bring greater happiness.

Doctors follow this rule, not for the sake of following a rule, but because this rule, like the Golden Rule. “Do unto others as you would have them do unto you” protects and promotes important values. Values we might promote include respecting people for themselves, not their body parts, and treating others and their projects as worthy. 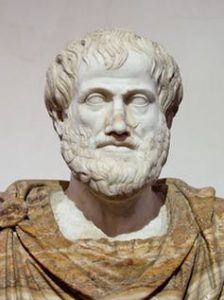 Aristotle. After Lysippos via Wikimedia Commons

There is another ethical approach, one that I have been developing, that comes out of a tradition in ethics that doesn’t focus only on outcomes or on duties, but rather on being a good person and promoting caring relationships.

Many philosophers, going back to Aristotle, have argued that virtue can be our guide. When figuring out what to do, we might want to ask how our actions reflect back on ourselves and the relationships we value.

There are many different ideas about exactly what counts as virtuous. But it’s hard to deny that being a compassionate, respectful, empathetic person, who takes responsibility for her relationships and works to make them better, would count. Honing these skills and acting on them can be a guiding ethos for our choices, actions, and making our way in the world.

If we strive to be better people in caring relationships, doing the right thing, even when difficult, can have unexpected rewards.