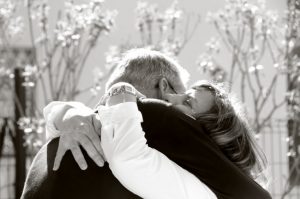 I was listening to an episode of Inquiring Minds podcast the other day, and in it, cognitive scientist Paul Bloom discusses his and others’ research on the earliest manifestations of morality in human babies, a hot topic in psychology and neuroscience these days.

Near the end of the (fascinating) interview, Bloom discusses the difference between compassion and empathy, as he sees it:

‘..I’m writing a book on empathy now, and I’m against it. I’m arguing that empathy’s a poor moral guide. And it’s… it’s like saying you hate kittens, or you’re in favor of Ann Coulter… it just sounds really weird. But I would make a distinction between empathy and compassion, where empathy is putting yourself in someone’s shoes and feeling their pain. And I think empathy can do good in the short term, but it tends to distort things. It’s racist and parochial, it’s a lot easier for me …to feel empathy for someone who looks like me and is adorable, than someone who scares me or lives far away and doesn’t look like me.

Empathy is innumerate, it tends to focus on the plight of individuals, not on groups. It’s because of empathy that societies like ours tend to care much more about a little girl stuck in a well than we do about global warming. Because I can empathize with the girl and her family. Global warming is some abstract thing. Yeah, it might kill billions of people, but show me one… and if you can’t, empathy has no moral pull. Compassion is valuing people, it’s valuing human life, and in a distant sort of way. And I think in every possible way, compassion trumps empathy. Even at the local level. So it’s not just contemporary doctors, but it’s actually Buddhist theologians [who] have long pointed out that feeling empathy for suffering people will exhaust you and will burn you out and make you useless, while a more distanced compassion, where they [people] have value, and you care about them and you want them to be better, but you don’t feel their pain, is actually better to be a good person.So I’m a big champion of compassion and very down on empathy.’ – Paul Bloom, ‘Babies and the Origins of Good and Evil’, Inquiring Minds #60, 46:38 – 48:24 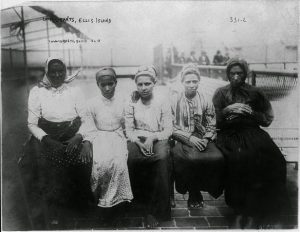 I was edified by Bloom’s remarks: a few times over the last several months, I thought over what I’d written in a previous mini-essay, ‘Empathy for Immigrants‘. In it, I appealed to those who take a hard-line stance against amnesty for illegal immigrants, challenging them to imagine having to choose between obeying the law and trying to procure health, safety, and access to a better life for themselves and their children.

While I continue to think it important to be able to put ourselves in others’ shoes, to take their emotional perspective, to realize that their interests are just as important to them as ours are to us insofar as we can feel with them, I’ve been doubting that this is of primary importance. To think it is, is to imply that if we don’t feel emotionally attached to others’ interests, then they might not be important. Empathy, it seems, is too narrow, too dependent on us happening to feel like being good to others. What leads to empathy in the first place?

As I was thinking about it, over time, I realized that what I was really calling for in that piece was more like sympathy, or compassion. But let’s take a moment here to consider an objection that probably already arose in your mind, or was about to: isn’t it just a question of semantics to be picky about the meanings of empathy, sympathy, and compassion? Aren’t they more or less interchangeable terms? Or aren’t they close enough to the same that the differences aren’t worth worrying about?

It’s true that they are often used interchangeably, and in some cases, it doesn’t matter which term is used, if what’s being said comes across clearly enough through context. Other times, though, they’re used interchangeably and confusingly, as in the Wikipedia article which seems to mix up the meanings of ‘sympathy’ and ’empathy’ multiple times in the first paragraph alone, and the Dictionary.com article which contradicts psychotherapist Stephen Crippen. In any case, it’s not the semantics of the words themselves which are so important (though for clarity’s sake it helps to distinguish the differences, and use accordingly), of course: it’s the ideas these terms are meant to convey.

So how do these three terms differ, and why is it important to understand the difference? 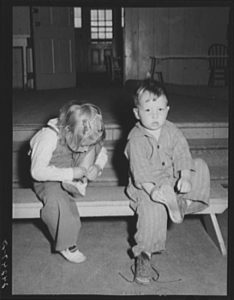 Keeping in mind that it’s the ideas behind the words, not the semantics, that are important, I’ll be using the word empathy in the way that academics and researchers such as Bloom, Rebecca Saxe, and Steven Pinker tend to use it, to refer to a state of internalizing anothers’ mental state, of ‘putting yourself in their shoes’, of experiencing, if only for a moment, another’s pain, joy, or perplexities as your own. Sympathy, while a related concept, is more often used (according to my own experience and my admittedly rather perfunctory research) to refer to a state of general concern for or identification with anothers’ experience, without necessarily internalizing it. Pinker describes it as ‘aligning another entity’s well-being with one’s own, based on a cognizance of their pleasures and pains’ (576). In other words, when we sympathize, we still identify with another’s internal experiences and care about them, but it’s enough to know they have them: we don’t necessarily have to feel them ourselves. Sympathy, then, is more like compassion, which is to care about the well-being of others and desire to help them as a result of our convictions, regardless of whether we feel like it at the time.

So to go back to my objection about empathy: it seems too narrow, too contingent, to be more than a starting point, morally speaking. It can give us the original impetus to do good, but doesn’t go far enough. Empathy gives us patriotism, local-sports-team-fandom, a feeling of religious, racial, ethnic, cultural, and ideological identity. These can all be important; David Hume points out how central the passions or ‘sentiments’ are to human morality, including empathy (in his time, termed sympathy). (Book III, Sect 1, Pt 1) Without our empathetic responses first toward our families, then our immediate social circles, then our wider community, morality would probably not exist. Those instincts first show us in life how to care about other people, as it did our earliest pro-social ancestors. Caring about people like ourselves is relatively easy.

That’s because, as Bloom points out and as history shows us, our empathetic response is usually aroused by the cute and the familiar. Just about everyone wants to help big-eyed babies, dimpled little children, good-looking people, and members of our racial, national, religious, cultural, political party, or sports team ‘tribe’. 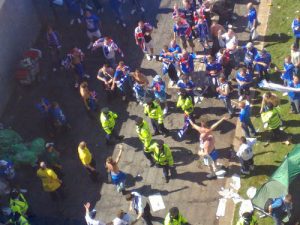 Yet, empathy does little for us when we encounter people from other groups. We don’t like to think about it, but we rejoice when we watch someone we don’t identify with take a fall; we don’t really want to help them most of the time. This is so common, we take it for granted so much, that we don’t even notice it happening. Gun enthusiasts rejoice when George Zimmerman is set free and mock Trayvon Martin’s defenders, and anti-gun activists feel a thrill when yet another school shooting adds weight to their argument, even as both groups speak regret for the victims. Conservatives gloat over Bengazi and liberals over Iran-Contra, and act as if each occurrence is a ‘proof’ of the rightness of their party and of the evilness of the other; we say little or nothing about the dead unless it serves to bolster our talking points. We beat up fans wearing the wrong sports jersey as we leave the game, ‘our’ team victorious, and we turn up our noses as we find ourselves having to share space with unsophisticated, poor, ‘uncool’, awkward, or otherwise ‘outsider’ people. We can’t, really, imagine what it would be like if ourselves or our children belong to groups who are more routinely beaten, imprisoned, or shot while committing the sort of petty crimes and youthful indiscretions, or having a public outbreak of mental illness, that our group routinely goes through unscathed. We bomb, declare war on, execute, allow to starve and die of illness in refugee camps and across the border, and otherwise treat our fellow human beings with an abundance of neglect and destruction, because we happen to not feel like caring for them. Empathy fails all the time.

It takes that leap of the imagination, inherent in sympathy or compassion, to want to help those who are not like us. Sympathy and compassion make us want to help people not just because we feel like it but because we believe in it for its own sake, for philosophical, religious, or other ideological reasons. Experiencing more kinds of people who are not like us, personally through travel and virtually through media, expands our opportunities and our instincts for empathy to some extent. Hume made this case somewhat controversially in his time, and our experience in our new cosmopolitan, digitally connected world bears this out. Yet sympathy/compassion can extend this capacity orders of magnitude more: it leads us to universalize the kindness and generosity that we naturally extend to our members of our close communities. Sympathy/compassion is the habit of  extending our concern for others based on our beliefs about justice, community, human rights, human flourishing, and so on. When we base our convictions on the right way to treat others on reason at least as much as on our pro-social instincts, we expand our moral characters, and not only increase our sympathy/compassion, we develop and expand our capacity for empathy as well.

Hume, David. A Treatise of Human Nature, Volume III – Of Morals (online). Originally printed for Thomas Longman in London, England, in 1740. (I had a glorious time referring to versions published in Hume’s own lifetime during my trip to Edinburgh!)

Pinker, Steven. The Better Angels of Our Nature: Why Violence Had Declined. New York: Viking Penguin, 2011.

‘What is the Difference Between Empathy and Sympathy?‘, Dictionary.com Word FAQs.