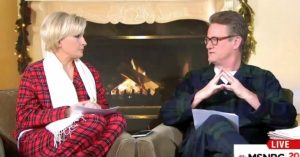 That’s how President-elect Donald Trump clarified a tweet he sent Thursday which said the U.S. must “strengthen and expand” its nuclear arsenal, a remark that set off warnings and calls for explanation. He then spoke on the phone with MSNBC‘s “Morning Joe” co-host Mika Brzezinski, who reported on air Friday morning that the president-elect said, “Let it be an arms race. We will outmatch them at every pass.”

Co-host Joe Scarborough added, “And outlast them all.”

“And outlast them all,” Brzezinski confirmed.

Both hosts were seated in front of a fireplace wearing pajamas and slippers.

Trump on Thursday tweeted that the U.S. “must greatly strengthen and expand its nuclear capability until such time as the world comes to its senses regarding nukes”—a statement that seemingly echoed Russian President Vladimir Putin’s call for nuclear expansion in his own country.

That’s despite the fact that the U.S. and Russia are both expected to trim their weapons stockpile by February 2018 under the new Strategic Arms Reduction Treaty (START). The U.S. currently has about 4,500 nuclear warheads and 1,500 deployed warheads.

John Tierney, executive director of the Center for Arms Control and Non-Proliferation, said Trump’s tweet was “dangerous” and that expanding America’s stockpile risked an arms race.

“It is dangerous for the president-elect to use just 140 characters and announce a major change in U.S. nuclear weapons policy, which is nuanced, complex, and affects every single person on this planet,” he said in a statement to Politico.

“The potential consequences of changing U.S. nuclear weapons policy so drastically are simply unimaginable,” he said. “Current plans already call for spending $1 trillion over the next three decades to modernize and maintain the U.S. nuclear arsenal, which the Pentagon has expressed concern about being able to afford. The president-elect will have to explain why any increase is necessary both financially and strategically.”

Reactions to Brzezinski’s reporting reflected both on the dangers of Trump’s statements and the surreal setting of the holiday-themed morning show.

The threat of a nuclear arms race has me thinking about everyone who voted Trump to “shake things up” or “burn it all down.”

Trump wants to expand our nuclear arsenal. I think of my aunt and baby cousin, found burnt in a ditch in Hiroshima. These weapons must go.

A new nuclear arms race was announced on a television show hosted by people in pajamas. https://t.co/AM4goSith6