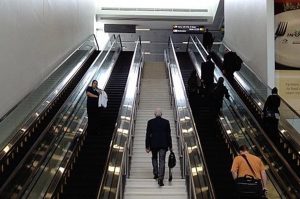 You’ve heard this before, right? Physical activity is good for your heart, your overall health – and, believe it or not, even your bank account. While physical activity used to be unavoidable, over the years, those “helpful” modern conveniences like washing machines, elevators, even electric toothbrushes, have made it that much harder to be active.

In the United States today, it’s therefore not surprising that most adults (50–95 percent) do not meet national physical activity recommendations.It’s well-established that inactive Americans are at a higher risk of heart disease, Type 2 diabetes and reduced life expectancy, but additionally there are negative impacts on the economy. While those who are most inactive have the greatest health risks, they also have the most to gain from increased physical activity. So, what can be done to “nudge” people to be more physically active?

A recent study, led by co-author John Bellettiere and a team at San Diego State University, found that stair use increased when signs nudging people to take the stairs were placed at the base of a staircase/escalator at the San Diego International Airport. The study was published Sept. 21 in the Journal of Primary Prevention.

It was encouraging that these prompts were effective for adults who exercise regularly as well as those who never exercise, signifying that simple nudges may be an effective motivator for those who have the most to gain from such interventions.

Stair use nudges, such as point-of-choice prompts, can include things like signs, posters and more novel approaches such as staircases that make music to the step of the user – all designed to get people to move more.

While this study was among the first to demonstrate this effect at an airport setting, a number of studies indicate similar successes in a variety of other public settings. This mounting body of evidence supports the use of nudges to increase lifestyle physical activity.

Do we run before we can walk?

When you picture someone engaged in physical activity, do you conjure an image of someone sweat-drenched, gasping for breath and, well, miserable? If so, we’ve got good news. 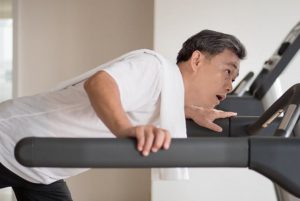 Increasing our activity level does not have to mean exhausting ourselves. 9nong/Shutterstock.com

Even mild forms of activity have a positive impact. According to U.S. physical activity guidelines, “some physical activity is better than none, and adults who participate in any amount of physical activity gain some health benefits.” This latest stair use study simply sought to encourage people to take the stairs rather than an escalator when the opportunity presented itself.

Daily activity is shaped by our physical and social environment. To increase physical activity on a large scale, ecological approaches that target not only the individuals involved but also the relationships, societal and policy factors they encounter are needed. 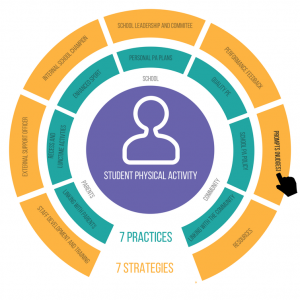 The PA4E1 program wheel shows the student at the center, but acknowledges a multi-pronged approach toward increasing physical activity. One of these prongs is nudging, in the form of email prompts. Matthew Mclaughlin, CC BY-SA

Matthew Mclaughlin’s Ph.D. project is one such example of an ecological approach. Alongside the team of researchers at Hunter New England Population Health (NSW Australia) led by Professor John Wiggers, they are scaling up a previously successful whole-school multi-component physical activity program, Physical Activity for Everyone (PA4E1). In this ongoing project, researchers are using seven strategies to increase physical activity, one of which is the use of email nudges to prompt physical education teachers to deliver the physical activity program. Stay tuned for those results.

Even adults can benefit from baby steps

Adults, even those who do not regularly exercise, can be nudged to choose climbing stairs over taking an escalator.

Climbing a single set of stairs is hardly going to have a major effect on a person’s health. However, take into consideration that at least one study has found that nudges at one set of stairs in a shopping mall increased stair use not only at the intervention site but at other staircases as well. Perhaps taking the stairs was rewarding, and this led to taking the next set of stairs? Add to that the finding that people are more likely to take the stairs when they see others around them choosing the stairs, and it becomes apparent how a simple nudge here and there can have a big cumulative impact.

It’s not realistic to think that someone would go from couch potato to marathon runner overnight. But taking the stairs is a practical and attainable first step toward improving one’s health. Pragmatically, such nudging interventions can serve as effective motivators to get the U.S. climbing up that stairway to health (see more). #SitLess #MoveMore