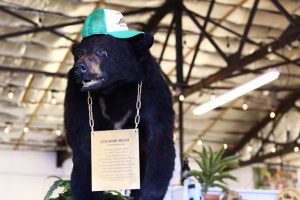 When it comes to weird tourist attractions, it’s hard to beat a stuffed black bear that died of what many people consider the worst cocaine overdose in history. Nicknamed Pablo EscoBear, the unique tourist attraction is currently on display at the Kentucky for Kentucky Fun Mall, in Lexington.

On December 23, 1985, the New York Times reported about a 175-pound black bear that had apparently died of an overdose of cocaine in Georgia’s Chattahoochee National Forest. Three months earlier, drug smuggler Andrew Thornton II had dropped large quantities of drugs from an airplane over that area, before jumping from it himself. Unfortunately, Thornton got tangled in his parachute and fell to his death in someone’s yard, in Knoxville, Tennessee. Before turning to a life of crime, Kentucky blue blood Andrew Thornton II had worked as a narcotics officer of all things, and then as a lawyer. It is believed that he had built his network of connections during his time on the right side of the law, before becoming a drug smuggler. He was on a coke-smuggling run from Colombia when he dropped 40 plastic containers full of cocaine in Chattahoochee National Forest. 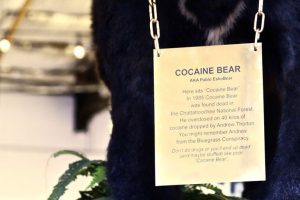 But instead of cocaine worth tens of millions of dollars, police found just 40 open containers with traces of cocaine in them, and a dead black bear. The animal had apparently feasted on the entire load and subsequently died of an overdose. “Its stomach was literally packed to the brim with cocaine. There isn’t a mammal on the planet that could survive that,” the now-retired medical examiner who performed the bear’s necropsy recalls. “Cerebral hemorrhaging, respiratory failure, hyperthermia, renal failure, heart failure, stroke. You name it, that bear had it.” A black bear dead from a cocaine overdose is not something you come across every day, so instead of cremating it, the medical examiner decided to have it stuffed. The “Cocaine Bear” was then gifted to the Chattahoochee River National Recreation Area, where it was displayed in the visitor center, behind a plaque, without any mention of his special origin.

31 years later, the guys at Kentucky for Kentucky remembered the legend of the Cocaine Bear and decided to track it down. It was easier said than done, as over the last three decades, the stuffed animal had changed hands several times. During the early 90’s, the threat of an approaching wildfire prompted the Chattahoochee River National Recreation Area to move its exhibit to a nearby warehouse in Dalton. From there, it was eventually purchased by country legend Waylon Jenning, who thought it would make the perfect gift for his good friend Andrew Thornton, a Kentucky native turned hustler in Las Vegas. So the Cocaine Bear “lived” in a Vegas mansion until 2009, when Thompson died. His possessions were then auctioned off and the legendary bear was purchased by Zhu T’ang, a Chinese gentleman living in Reno, for just $200.

When Kentucky for Kentucky tried to get in touch with T’ang, his wife told them that he had passed away in 2012, but that the bear was still in his old office. She had never liked it and even after hearing its bizarre story, she was more than willing to part with it for free, as long as whoever was interested agreed to pay for the shipping. So they made arrangements, and it is now the main attraction at their Kentucky for Kentucky Fun Mall, in Lexington.

Now, people from all around the world are reportedly coming to Lexington for a chance to see the Cocaine Bear, many of them fans of the The Bluegrass Conspiracy book inspired by Andrew Thornton II’s exploits.