Ants are voracious predators and often very good at defending plants from herbivores. People have taken advantage of this quirk for centuries. In fact, using ants in orange groves is one of the first recorded pest control practices, dating back to A.D. 304 in China.

In southern Mexico, Azteca ants are frequently found on coffee plantations. They live in giant nests built into the sides of the hardwood trees farmers plant to shade the delicate coffee plants below. The ants feast on sugary nectar, either directly from extrafloral nectary structures on the shade trees or indirectly from nectar excreted by aphids living on the coffee plants. In return the ants remove other insects to protect the plants. The Azteca ants are highly territorial and very aggressive, which makes them great at controlling coffee pests. They’re particularly skilled in eliminating one of the coffee’s most damaging pests, the coffee berry borer.

My colleagues and I are studying how these ants are at the center of a complex web of organisms that are important to coffee management. In the process, we serendipitously discovered a brand new species that may be integral to the ants’ success. 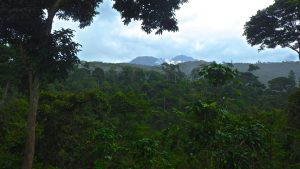 Ants must deal with parasitizing flies

For the last six years, I’ve been examining the dynamics between these beneficial ants and one of their most deadly natural enemies, phorid fly parasitoids.

On the surface, it’s hard to imagine that phorid flies could have a big impact on a mighty Azteca colony made up of millions of workers. For one, these flies are small, approximately the size of a pinhead. Also, it takes only a fraction of a second for an adult phorid fly to parasitize an ant by laying its egg in the ant’s body.

But these parasitoids are definitely bad news for the ants. Once a phorid fly injects its egg into the ant, the fly larva slowly makes its way into the ant’s head, ultimately consuming the contents and killing the ant in the process. Then it decapitates the ant and uses the head as a pupal case. Once fully mature, the adult fly will emerge from the ant’s mouth parts to begin the cycle again.

This gruesome process isn’t even the worst of it for the ants. Phorid flies aren’t just a death sentence for a parasitized individual ant, they also negatively affect the function of the ant colony as a whole. When ant workers discover phorid flies nearby, they freeze in place or hide, preventing them from collecting food or properly maintaining their nest.

It was during an experiment in the field, watching phorid flies parasitize ants, that I first noticed the beetles.

I had hypothesized that phorid flies usurp the ants’ own complex chemical communication system to locate their victims; I was testing extracts from different ant glands to determine what chemicals the flies might use as a beacon to find their ant hosts.

I had dissected and extracted the Pygidial gland sac of the ants, which houses their alarm pheromone. The ants secrete this chemical blend whenever they’re injured or discover an intruder to the nest. (It’s quite pungent, and smells vaguely of blue cheese.) I was finding that the phorid flies are attracted to these alarm compounds. Shortly after the chemicals are released into the air, the flies arrive to inspect the immediate area where the scent is strongest. Annoyingly, I was also finding that tiny beetles were apt to crash the party, landing in my observation area with the ants. 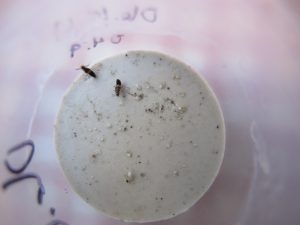 A year or so later, I was working on another phorid fly-rearing experiment in my tiny lab space at the Finca Irlanda research station in Chiapas, Mexico. My lab consisted of a few shelves and a small work table in a poorly screened-in porch area. The experiments involved taking parasitized ants and keeping them alive in tiny chambers with small air holes until the phorid flies could fully develop and hatch.

But everything was going extremely poorly. Over and over again, I would check on my parasitized ants only to find them missing, and in their place, once again, the tiny beetles. It seemed these intruders were entering my lab, accessing the rearing chambers via the air holes and eating the ants.

This is when I realized something interesting was happening and started formulating questions. What were these beetles? Are they finding the ants the same way the phorid flies do? Are they only eating parasitized ants? If so, why?

Predation that could help the colony

Since Azteca ants are so aggressive, it seemed unlikely that a beetle would be able to effectively prey on healthy worker ants twice its size. Myrmecophillic (“ant associated” or literally “ant-loving”) beetles use a wide range of strategies to live closely with such dangerous creatures as ants. Some mimic the smell or look of ants, others use particularly swift movements to outmaneuver them and others use ant-repellent secretions to create a protective force field around themselves. In each of these cases, the beetles take some kind of resource from the ant, whether it’s food from the colony’s stores, or safe nesting space, or simply eating the ants themselves.

It occurred to me that the myrmecophillic beetles associated with Azteca might be exploiting the state of the parasitized ants in order to prey on them. Even more intriguingly, this might be a case where predation is ultimately not a bad thing for the ants as a group. Parasitized ants are already almost certainly going to die. And their deaths result in more phorid flies, which is bad for the ant colony.

But if a beetle eats a parasitized ant, the developing phorid fly is also consumed. By eating only parasitized ants, these beetles may be reducing the number of phorid flies that successfully develop – which could actually benefit the ant colony.

So I got to work conducting experiments that would untangle what’s going on. I used synthetic versions of the Azteca alarm pheromone chemicals to confirm the beetles were indeed using the alarm pheromone to find the ants, regardless of whether they were in my screened-in lab space or the center of a field of coffee. I set out various traps of parasitized, healthy or injured ants to see if the beetles would prey on only the parasitized ants (they did). 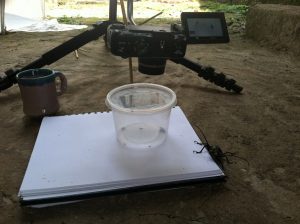 Painted ants and beetles in the behavioral observation arena. Large beetle visitor on the notebook was not included in the experiments. Kate Mathis

Meanwhile, specimens of the beetles were being transported to a beetle expert for identification. As it turned out, they were a completely new species, the first from their genus to ever be recorded from Mexico. With my collaborators, I chose to name the species Myrmedonota xipe for the Aztec god Xipe Totec. This deity was worshiped via human sacrifices in an act meant to symbolize the casting-off of the old to bring new growth and prosperity to all – an apt metaphor for the beetles’ role in Azteca ant colonies.

When many people think of agriculture, they imagine only the farmer’s crop. But, my colleagues’ and my work shows that a complex web of interactions between many species of insects can provide important ecosystem services, like pest control, in agroecosystems. This particular story shows just a piece of the puzzle, where the Azteca ants are benefiting the coffee, and the beetles are helping keep the phorid flies from stopping that.