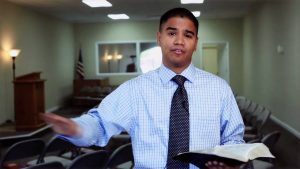 Pastor Roger Jimenez made national news after the most recent mass shooting at a gay night club in Orlando when he decided to share what God thinks on the matter — specifically that more “sodomites” should be dead. Unfortunately for him, his god is a spiteful one who doesn’t like people putting words in his mouth — or Jiminez is simply an intolerant person whom a civilized society will not tolerate. In any case, the good pastor just got some very, very bad news.

After the shooting, Jimenez made some remarks that were horrifying even by right-wing “Christian” standards, explaining that the country “shouldn’t be mourning the death of 50 sodomites.”

“People say, like: ‘Well, aren’t you sad that 50 sodomites died?’ ” Jimenez continued in his ravings. “Here’s the problem with that. It’s like the equivalent of asking me — what if you asked me: ’Hey, are you sad that 50 pedophiles were killed today?’

“Um, no, I think that’s great. I think that helps society. You know, I think Orlando, Fla., is a little safer tonight,” he concluded, adding that he’s upset more didn’t die:

The remarks were universally condemned, even by some of the more extreme elements on the right who have not completely lost their sense of humanity. And now, Jimenez is looking for a new place to hold his church services. WMAZ reports that the property management company and owner of the building which Verity Baptist Church calls home will not be renewing Jimenez’s lease:

The property management company and owner of the building in which Verity Baptist Church and its Pastor Roger Jimenez preside have decided not to renew the church’s lease, and have asked church officials to consider moving.

Under the terms of the lease, Jimenez cannot simply be evicted, but the company says it can not tolerate “tenants who advocate hatred and the taking of innocent lives.”

“We have many places of worship and other religious organizations in the properties we manage,” company officials said in a press release. “Like all our tenants, their occupancy rights are protected in their leases.”

But, of course, that won’t be an issue once the lease is up in March of 2017, and Jimenez and his hateful friends are told to put their boots to the pavement. If Jimenez leaves early, his lease will be canceled without any penalty.

“Just as we respect the right of individuals to speak their views, as distasteful as they may be, we also respect the right of others to protest as a reflection of their values,” the company says. “For decades, the owners and staff at Harsch Investment Properties have supported the LGBT community and many other organizations whose missions are to further respect, dignity and the ability for all individuals to live their lives as they wish.”

Jimenez is an ideological clone of Tempe Arizona’s Pastor Stephen Anderson, who also made some rather horrific remarks about the massacre. Anderson didn’t even wait for the bodies to grow cold before he posted a gleeful and celebratory message on YouTube in which he said it was “good news” that 50 “f*ggots” — a group he, too, calls pedophiles without any evidence — died.

Watch the pastor’s hateful rant below: