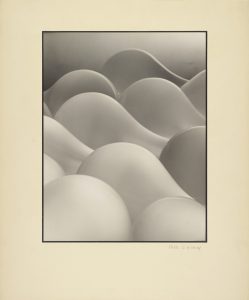 An exhibition shows how artists have depicted electricity, making visible the tension between our love of the new and our nostalgia for the past

Light bulbs and wires carrying electricity are everywhere. They’re so common, in fact, that we hardly notice them. An exhibition at the Getty Museum, In Focus: Electric!, explores electricity’s parallel evolution with photography and shows how artists have explored our excitement and fear about technological change.

Learning to Love the Light Bulb

The idea for the show started with bulbs. “I started thinking about the history of the light bulb,” said Mazie Harris, curator of the exhibition and assistant curator in the Department of Photographs, “so I started looking into the collection. We have so many light bulb images from the 1930s—in that period, it seems to have been a real interest for photographers. Now we take light bulbs for granted, but [at the time] they really did change so much.” 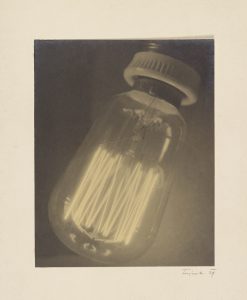 The bulb’s expansion into every home wasn’t easy. When light bulbs were first available, they caused a bit of panic. Images of women reacting hysterically to their incandescent glow can be found in scientific journals of the day. What was this new technology? Was it safe? Was a three-foot buffer needed to avoid unhealthy radiating light? No one knew the long-term effects of artificial light, or if it could be trusted. There were even ads for shields to be placed in front of lamps, so that people could benefit from the light for reading without the glow coming into contact with skin.

A 1939 Edison advertisement from the Huntington’s archival collection of Southern California Edison attempts to set our minds at ease. The female subject is in awe, not horror. “She’s showing ‘Look, I can hold it. Don’t be afraid!,’” Mazie explained. 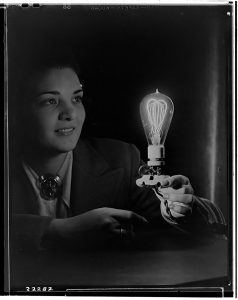 Electricity changed cities as well as homes. Suddenly, light was everywhere. Jaromír Funke reacts to this mass consumption in his images of neon signs. Overlaid, mass produced, commercial glowing words confront the viewer with an overwhelming wall of luminosity. 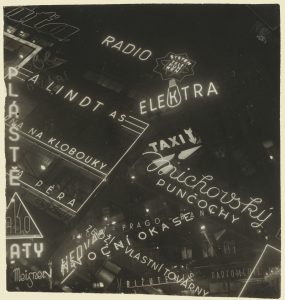 This reaction to rapid technological change in the early- and mid-20th century parallels the way many speak of the Internet, social media, and screens today: Change feels new, busy, and frantic—to me, it’s exciting and nerve-wracking at the same time.

The burgeoning of bulbs and electricity also brought wires, sockets, and e-waste so prevalent that they have become overlooked. Artists, however, use their craft to unveil things unseen.

Gen Otsuka’s image of Mt. Fuji illustrates this idea perfectly: Massive electrical wires at the top of the image—deliberately included in the frame—obstruct the beautiful vista of the mountain. (Did you notice them at first? I didn’t.) 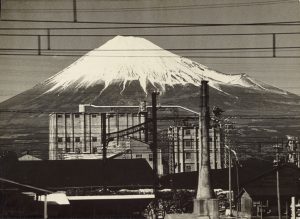 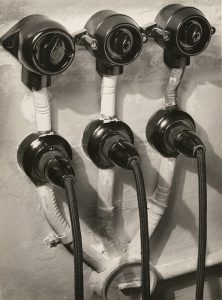 “Artists and photographers are so attentive to things that the rest of us overlook,” Mazie added. “That was one of the core concepts in my thinking about all this material.”

Taken together, the images in the show are fascinating to me for how they reveal our complex, fraught relationship with technological change. “We like our new technologies to give us the comforts of the old technologies,” Mazie told me. “That’s why our cell phones make a shutter noise when we take a photo, why we have Instagram filters.”

Perhaps that’s why today’s readily available energy-efficient bulbs are so jarring. Edison bulbs, by contrast, are now comforting and retro, and can be spotted in contemporary craft cocktail bars and purchased at Urban Outfitters. It won’t be long, it seems to me, until our fluorescent pig’s tails and LED street lamps seem as quaint as the sockets and neon advertisements of the early-20th century.