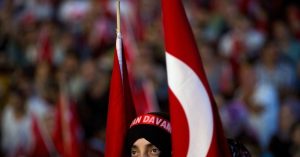 The Turkish government has also issued arrest warrants for 89 journalists since the beginning of the week. (Photo: AP)

Turkey’s brutal crackdown in the wake of a failed military coup reached new heights on Wednesday, as the government decreed the shut-down of 131 media outlets. The government has also issued arrest warrants for 89 journalists since the beginning of the week.

President Recep Tayyip Erdoğan had already demonstrated himself to be against a free press in Turkey prior to the coup, many observers note.

The latest crackdown is “on media outlets and journalists [the government] accuses of being linked to the Fethullah Gülen movement, which it blames for the foiled military coup,” said Emma Sinclair-Webb, Turkey director at Human Rights Watch. “In the absence of any evidence of their role or participation in the violent attempt to overthrow the government, we strongly condemn this accelerated assault on the media, which further undermines Turkey’s democratic credentials.”

“The situation came to a point where local media’s fear of being arrested is leading to an increasing muzzlement of the press, thus infringing fundamental human rights such as freedom of expression and the public’s right to know,” the International Federation of Journalists said.

The IFJ said it and the European Federation of Journalists were calling on the EU “to take additional steps to hold Turkish President Erdoğan accountable for press freedom breaches.”

AP writes that in total, “more than 66,000 people have been suspended or dismissed from their jobs in the wider public sector for alleged ties to the Gülen movement, according to the state-run Anadolu news agency, including in health care, education, the judiciary, ministries, municipalities, and even Turkey’s national airline.”

On Thursday, AP reports, Turkey is expected to announced further dismissals from its military—which has already been purged of nearly 1,700 soldiers and officers—in what a senior Turkish official described as “dishonorable discharge.”

Human Rights Watch reports that many journalists facing warrants for their arrest have fled the country.