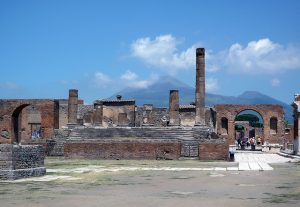 View of the Forum with Mount Vesuvius in the distance, Pompeii 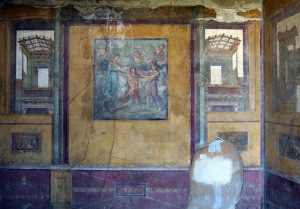 Fourth style wall paintings (from a room off the peristyle), House of the Vettii, Pompeii (photo: Lady Erin, CC BY-NC-ND 2.0)

The ancient city may be quiet now, its life ended by a fantastic cataclysm nearly two thousand years ago, but the remains of houses, decorations, and the objects of daily life whisper to us about the lives of the ancient people who inhabited Pompeii before the eruption of Mount Vesuvius. Domestic spaces, in particular, offer a rich resource for examining ancient lives that, in some cases, ended abruptly. Pompeii was thriving up until the moment of its destruction and in studying its life interrupted, we arrive at important insights about what it was like to live in the Roman Mediterranean.

The House of the Vettii or Casa dei Vettii (VI xv,1) is a Roman townhouse (domus) located within the ruined ancient city of Pompeii, Italy. A volcanic eruption destroyed Pompeii in the year 79 C.E., thus preserving extraordinary archaeological remains of the Roman town as it was at the time of its cataclysmic destruction. Those remains constitute a nearly unparalleled resource for the study of the Roman world.

Beginning with the Renaissance interest in all things classical, architectural historians and archaeologists have been debating the form and function of ancient Roman houses for several hundred years. The interest in the domestic architectural form was fueled further by the re-discovery, in the middle of the eighteenth century, of Pompeii, Herculaneum, and other sites destroyed by Vesuvius. 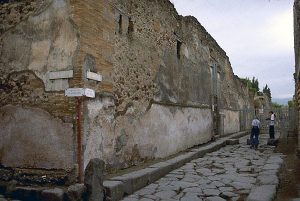 A house is, of course, a dwelling—but it is also a stage on which the rituals of daily life and social hierarchy would be performed. During the time of the Roman republic (fifth through first centuries B.C.E.), ranking aristocratic families (patricians) used domestic display as a way to reinforce social position and as a way to advance their own fortunes, as well as those of their dependents and clients (clientes), within the community. Since Republican society operated on the basis of this patron-client relationship, the domus played a key part in the reinforcement of social hierarchy as the patron (patronus) would receive his clients (clientes) in the atrium of his domus each business day. While visiting with the patron, each client would get an eyeful of the patron’s household wealth, thus applying implicit pressure on the patron to ensure that his house was tasteful and fashionable.

The patron-client system revolved around asymmetrical social relationships whereby lower ranking clients were bound to their patrons by the qualities of trust (fides) and dutifulness (pietas). Governed by ancestral custom (mos maiorum), clients would seek support and favors from the patron; in turn the patron provided protection, support, and benefaction, collectively known as patrocinium. This system had changed somewhat by the time of the brothers Vettii and it is unclear to what extent the patron-client system factored in their lives or in their own domestic sphere.

In his treatise on Roman architecture, the first century B.C.E. author Vitruvius outlines the key elements, proportions, and aesthetics of the Roman house, creating what has been treated as a canonical recommendation for domestic architecture of the period. The Vitruvian canon (or standard) proposes a range of plans, suggesting strongly that the organization of interior space was important in Roman architectural theory (De Architectura 6.3.3-6). Although the plan of the Roman domus does reflect the canonical aspects described by Vitruvius, we also see enormous variation with modifications and remodeling undertaken over time. 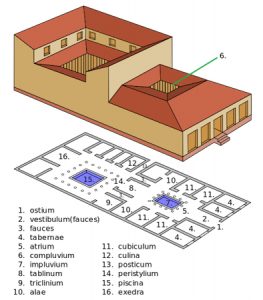 The standard house (domus) plan has several key architectural elements. Generally entered from the street via a narrow doorway (fauces), the large centralized reception hall (atrium) is flanked by wings (alae) and often bounded by bedrooms (cubicula). The office of the head of household (paterfamilias), known as the tablinum, links the public part of the house (pars urbana) to the private part of the house (pars rustica). This latter area often focuses on an open, colonnaded courtyard (peristylium) and serves as the center of family life, with the kitchen (culina), dining room(s) (triclinium or oecus), and often a small garden (hortus). Many houses also had a second level that may have contained additional sleeping spaces and perhaps storage.

The House of the Vettii was excavated between late 1894 and early 1896. The artifacts that were recovered allowed for the identification of the house’s putative owners, Aulus Vettius Conviva and his brother, Aulus Vettius Restitutus. Both men have been identified as former slaves or freedmen (liberti). The Vettii had risen to some prominence; Conviva was an augustalis—the top civic office for which a freedman would be eligible. In the construction and decoration of their house the brothers display a mind-set not uncommon among the newly-rich. Two strongboxes (arca – essentially lockable boxes for storing valuables)—concrete signs of wealth—were placed prominently in the large atrium so that visitors would be sure to notice them. 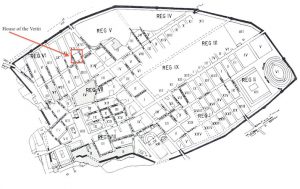 Plan of Pompeii, with location of the House of the Vettii (click image to enlarge)

The plan of the house 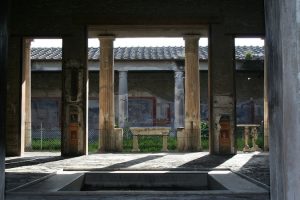 The House of the Vettii covers an area of approximately 1,100 square meters. The construction of the house and its decorations belong to the final period of Pompeii’s occupation and therefore provides important evidence of the aesthetics of the city on the eve of its destruction.. 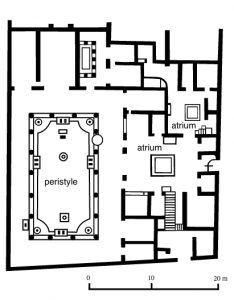 The house  was built atop the remains of an earlier house that survives, in part, in the form of the wings (alae) and a doorway. The plan of the House of the Vettii has two large central halls (atria) and, significantly, lacks an office space (tablinum). Entry to the house was gained from the east by way of a vestibule that granted admission to the larger atrium. The stone-lined basin for collecting rainwater (impluvium) lies at the center of the atrium. This larger atrium communicates directly with the peristyle (an open courtyard surrounded by fluted Doric columns) by means of a set of folding doors. The smaller atrium was the focus of the service portion of the house, while the peristyle and its well-appointed rooms was meant for entertainment and dining. 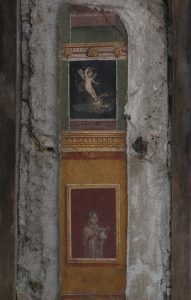 The decorative schema of the House of the Vettii provides important evidence for trends in domestic decoration in the final years of Pompeii’s occupation. Since Pompeii suffered a major earthquake in 62 C.E. that caused significant destruction, the chronology of the wall paintings and other decorations in the House of the Vettii has been a topic of debate since the house’s discovery.

Most art historians point to the house’s decorative schema as being representative of a key transitional phase, between the Third and Fourth styles of Pompeian wall painting. Some scholars consider it among the finest examples of the Fourth Style at Pompeii. Paul Zanker sees the Fourth Style wall paintings as being imitations of higher art forms, reckoning that the chosen pictures aim to turn the rooms into picture galleries (pinacothecae).

The atrium is richly decorated, as are the rooms opening onto the peristyle. Two of these were in the course of being painted at the time of destruction, while the other three are richly appointed with Fourth Style wall painting. The largest of these, a dining room, is decorated in panels of red and black with an exceptionally fine motif of erotes or putti (mythological winged gods associated with love) engaged in various occupations (image below). The central panel pictures that were likely set into the walls do not survive. Overall the scheme of wall painting in the house of the Vettii suggests an attempt at forward-looking interior decoration on the part of the owners. 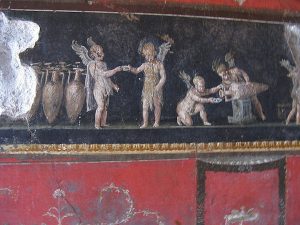 Overall the evidence furnished by the House of the Vettii offers key insights into domestic architecture and interior decoration in the last days of the city of Pompeii. The house itself is architecturally significant not only because of its size but also because of the indications it gives of important changes that were underway in the design of Roman houses during the third quarter of the first century C.E.

Archer, W. C. 1990. “The paintings in the alae of the Casa dei Vettii and the definition of the Fourth Pompeian style.” American Journal of Archaeology 94.1:95-123.

Wallace-Hadrill, A. 1996. Houses and Society in Pompeii and Herculaneum. Princeton: Princeton University Press.