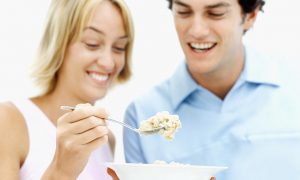 ‘Which word is funnier: porridge or oatmeal?’ This is the question one of us recently posed to the other. Clearly, the notion was insane. Surely finding something funny requires context – a skateboarding dog or the feeling of shock as a comedian cashes in on the buildup of a joke. Then again, maybe not. If words were funny on their own, it would violate every major theory of humour that has ever been posed. We’re talking about a simple truth that would have philosophers from Plato and Arthur Schopenhauer to George Carlin rolling in their graves. If porridge were funnier than oatmeal, that would be earthshattering, because it would overturn everything everyone has ever said about humour.

Consider one of the oldest theories of humour, the superiority theory. For Plato – the Greek philosopher who was scared of beans – the purpose of humour was to show one’s superiority over another. A slave could laugh at the first-world problems of his owner. And the owner could laugh at the funny way his slave talked. Both, Plato argued in the Laws, were simplistic and immoral: humour was an evil enjoyment of another’s fate. That idea hardly died with Plato. Thousands of years later, in Human Nature (1650), Thomas Hobbes referred to laughter as a ‘sudden Glory’ arising as the result of feeling one’s ‘Eminency’ over the ‘Infirmity of others’.

Aristotle had poo-pooed the idea of superiority, and instead proposed his own more superior idea, claiming in the Poetics that amusement lay in the ludicrousness of our surroundings. He argued that laughing at comedy is harmless; we all have a moral compass that tells us when to stop. A clear distinction was made between tragedy and comedy. While both show that the hero made an error, tragedies evoke sorrow and pity in the audience, and the story spins towards a destructive end. Meanwhile, comedies provoke ridicule and laughter, and their outcome lacks the morbid downfall of someone we root for.

This idea of painless humour at absurdity has evolved into what we now call theories of incongruity-resolution. These highlight the fact that each one of us has an internal world. As we grow and learn, we build a web of expectations – a model of the world that we carry around inside of us. We know, for instance, that dogs are mostly silent, save for their bark. A conflict between what we know and what we actually experience is an incongruity. And it can be funny: imagine waking up to find your dog holding forth about the plummeting price of gold.

One of the most prominent of the incongruity-resolution theories is called benign-violation, which basically states its recipe in its name. Funny is an unexpected event that doesn’t hurt you. In 2010, the behavioural scientists A Peter McGraw and Caleb Warren noted that we appreciate humour when a violation of norms happens, but such a violation also needs to be non-serious. A situation can be benign in different ways. We can refer to something that happened long ago – such as laughing at a failed relationship (we’ve all been there). We can joke about people we don’t immediately know, about events that are happening far away, or about values we don’t treasure deeply. Mix the ingredients, and you have humour. I just found out I’m colourblind. The diagnosis came completely out of the purple.

The sheer amount of humour theories is fascinating. In The Expression of the Emotions in Man and Animals (1872), Charles Darwin compared humour to the ‘tickling of the mind’. Essays such as Herbert Spencer’s ‘The Physiology of Laughter’ (1860) and Sigmund Freud’s ‘Humour’ (1928) have suggested that humour is our body’s way of releasing built-up stress – a means of getting rid of excess arousal in a harmless, acceptable form. It all shows how intricate humour is, relating to a wide variety of psychological situations. We laugh at our children’s heroic successes in the kindergarten playground and at the audacity of our bad luck, standing in the basement ankle-deep in water when the lights go out. And we can laugh ourselves to pieces merely at the laughter of others.

But what does that say about porridge?

In a 2016 study by the psychologist Chris Westbury at the University of Alberta and colleagues, nonsense words, such as octeste and heashes, were presented to people who were then asked to judge how funny they were. Using a measure of entropy to calculate how unlikely a made-up word was in relation to English, Westbury was able to predict how funny words would be. Gibberish closely resembling English words seems familiar, whereas a completely bizarre combination of letters seems utterly foreign. It turns out that the stranger the word, the funnier it was rated.

Strangeness might lie in the eye of the beholder. If your name were Octeste, you might not find it funny. But what if your name were some kind of breakfast cereal? To our surprise, no one had ever asked this important scientific question before: exactly how funny is porridge? Given the advances in computing and crowdsourcing, we decided to ask people: how funny is porridge on a scale from 1 to 5? This was a meticulous job. Investigating the humour of porridge is no laughing matter. After compiling a pool of 4,997 words that were frequently used in previous studies, we created individual questionnaires and sent those out to 1,000 people like you. In a couple of days, the results were back.

The funniest word? Booty. Followed by tit, booby, hooter, nitwit, twit and waddle. Nearly everyone agreed that these words are pretty funny. On the other hand, people also agreed on what is not funny. Torture, torment, gunshot, death and war. What causes a word on our list to be funny? The less common a word was, the funnier it was rated. This is true across a variety of frequency measures, including US and UK book corpora, as well as movie subtitles. When we’re not familiar with a word, it feels funnier – similarly to seeing dogs talk commodity prices or an octeste chowing down on heashes.

However, low frequency isn’t enough to make a word funny. It also has to be a word that isn’t too negative. This is in agreement with the benign-violation theory – if a situation is serious, we will rarely find it funny. Talking about death and torture is nothing to be amused about. But you can talk about booty torture or twit torment, and then you have something funny again. We have no idea why that is.

Why did we do all this in the first place? Is it really important to know that booty is funnier than hooter? The answer is a resounding yes. People often say that laughter is the best medicine, but medicine for what? Some evidence suggests it is powerful for coping with stress and processing negative life events. Other evidence suggests that those who laugh also have a healthier self-perception. If you can laugh, you nurture a positive side of your personality, leading to higher psychological and physical wellbeing. Understanding humour is understanding ourselves. The human mind is easily one of the most complex dwellings in the Universe, and it also happens to be the address where your ‘you’ lives. If we can understand what makes us laugh, then we might just get to peel back a bit of the wallpaper, and see what we’re really made of. And above all else, it answers a very serious breakfast-table question: porridge IS funnier than oatmeal. But you knew that already.