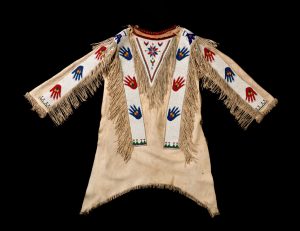 In late 2013, I got an out-of-the-blue call from Stella Iron Cloud, a member of the Oglala Lakota (a.k.a. Oglala Sioux) Tribe of South Dakota. She asked if she could visit the Denver Museum of Nature & Science (DMNS), where I am the chair of the anthropology department, to see a beaded shirt that once belonged to her family.

I have to admit that when she inquired about a visit, a few small alarm bells went off in my head—we get calls like this all the time. They can lead to difficult conversations about why a particular piece isn’t on display or is no longer even in the collections (museums do, in fact, remove objects from their collections from time to time). In this case, however, things went unbelievably well.

The shirt Ms. Iron Cloud and her family wanted to see is known as the “Many Hands” shirt. It is made of tanned hide and has strips of white glass beads running down its front, back, and both sleeves. The strips are decorated with small hands made of red and blue glass beads, and each hand has a stylized heart composed of three diamond shapes at its center. Aesthetically, the shirt is remarkable. Even more remarkable is the story behind it.

The Many Hands shirt was made around 1910 by Bessie Black Horn, wife of Chief Daniel Black Horn of the Oglala Lakota. Chief Black Horn traveled extensively with Buffalo Bill’s Wild West and other shows in the first few decades of the 20th century. He went to Europe several times and, though he spoke no English, met many members of European royal families and government officers, with whom he had to shake hands. When he returned home, he told Bessie of these “many handshakes”; she then made the shirt to honor this peculiar greeting style.

Chief Black Horn was a grown man at the time, so he could not serve as a model for the hands. He and Bessie were taking care of their young grandson when she designed the shirt, so they used the young boy’s hands as the template. That young boy was Stella Iron Cloud’s father! 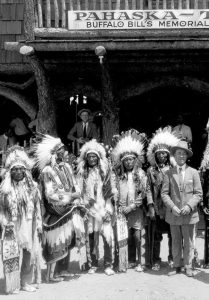 Chief Black Horn, second from the left in his Many Hand’s shirt, was made famous through the Buffalo Bill’s Wild West show. / Buffalo Bill Museum and Grave

Most of our families don’t have such significant ties to the historical record, of course. Still, take a moment to consider this: If you could select a single family heirloom to be preserved in a museum in perpetuity, what would it be? Why? Who would make the decision? You? Your nuclear family? Your entire extended family?

As difficult as it is to answer these questions, even given time to ponder their implications, many Native American families have not had the privilege of such active decision making. These difficult decisions have been made for them by people in positions of power—and often under duress. Or they have been made under duplicitous circumstances and even as a result of outright theft.

As my colleague (and SAPIENS’ editor-in-chief) Chip Colwell relates in his new book Plundered Skulls and Stolen Spirits, millions of family heirlooms, sacred and funerary objects, and objects of cultural patrimony (think the Liberty Bell, which belongs to all of us, yet belongs to none of us), have ended up in museums over the last 150 years. It is a troubling and difficult situation—one that many museum curators wrestle with on a regular basis. In some cases, we have to admit that artifacts in our collections pose great ethical challenges, and sometimes those items are ultimately returned to their rightful owners. In the most unfortunate cases, objects in museums lead to conflict, with all interested parties digging in their heels and refusing to compromise. Once in a while, though, when the stars align, an object brings people together to share an experience of beauty, wonder, and appreciation. The Many Hands shirt is one such object.

So how did this beautiful piece end up in the DMNS collections? Black Horn sold the shirt to collector Drew Bax in 1940, when the chief was about 60 years old and no longer performing in traveling shows. Bax, in turn, sold it to collectors Mary and Frances Crane in the 1950s. The Cranes donated their entire collection to DMNS in 1968, and the shirt has been here ever since. It was on display in the Crane Hall of Native American Indian Cultures until about a decade ago, when it was removed in order to preserve it.

On November 29, 2013, Ms. Iron Cloud and about a dozen members of her extended family came to Denver to see the Many Hands shirt in person. I had already placed it in my office in preparation for their visit. When she walked into the room and first laid eyes on it, she audibly gasped, put her hand to her mouth, and caught herself as her knees buckled slightly. Luckily her nephew was at her side to make sure she didn’t completely collapse. As tears welled up in her eyes, she said, “I haven’t seen it since I was about 5 years old. I’ve been looking for it for years. I’m just so excited to finally find it!” 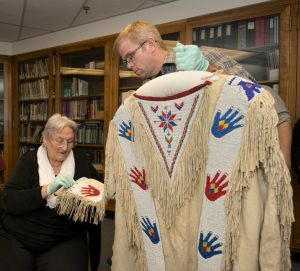 As a curator, it is my responsibility to ensure that priceless objects in the museum’s collections are properly cared for. It’s also my responsibility to make sure that the information we have about those collections is as detailed and accurate as possible. Stella and I enjoyed talking about the piece and her family’s history, and I was thrilled to learn that they were happy that it was in our museum and in such great condition.

After our visit, in a moment of solitude, I sat down. I took a deep breath and pondered what had just happened.

On one hand, it was just another day at the office. On the other, it was a day I’ll never forget. I was caught off guard by Stella’s emotional response to what had been, to me and until that day, just another museum object. On reflection, I realized that we all have emotional attachments to inanimate objects. Indeed, that’s one of the things that makes us human. We name our cars, we wear our lucky hats on game day, and we decorate ourselves with symbols and meaningful accessories. And that doesn’t even approach our deep relationships to family heirlooms, much less sacred and ceremonial objects.

Finally, I realized that it’s a lot more enjoyable being a curator when relationships are built and maintained than when they are destroyed by conflict or tension. In the case of the Many Hands shirt, I am thrilled and honored to have helped a wonderful, interesting family reconnect with one of its cherished heirlooms.