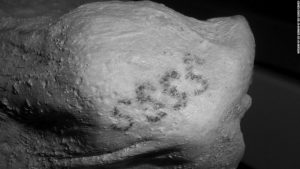 For thousands of years, tattoos have been indicative of the passage from girlhood to womanhood, of female power and female beauty. 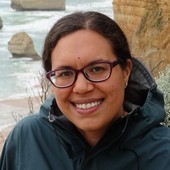 Almost a quarter of Australian women now have tattoos – a trend some attribute to the influence of feminism. What I find interesting is that the mainstreaming of female tattooing in the west has finally caught up with a practice that is thousands of years old.

Ancient Egyptian female mummies have been found with tattoos. Thracian women were depicted with “sleeve” tattoos on their arms in Greek vases from the 5th century BCE. In traditional Maori culture, the eldest daughter in elite families was tattooed as part of a sacred ceremony.

I have also been researching abstract painted motifs on nude female Cycladic sculptures, which I argue are evidence that women were tattooed in the Cycladic islands in Greece in the Early Bronze Age (ca. 3000-2000 BCE). 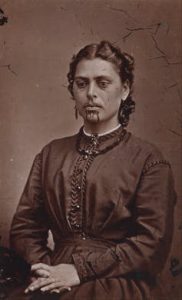 My interest in tattooing stems from my upbringing. Living in Aotearoa, from roughly the ages of eight to 28, meant that I was exposed to Maori and Pacific Islands tattooing attitudes. In Pacific cultures, where the tattooist has traditionally been (and usually continues to be) male, ancient stories say that the ancestral gods originally wanted women to safeguard the practice and be the primary recipients of tattoos. Nevertheless, both men and women were tattooed in Maori society prior to British colonisation in the 19th century.

But the Tohunga Suppression Act of 1907 criminalised tattooing as one of the teachings and practices of Tohunga (Maori experts or priests). In 1962, the Maori Welfare Act was introduced in Aotearoa, repealing this act. Since then, there has been a resurgence in tattooing among both men and women there.

I grew up with friends who appreciated the significance of tattoos. As soon I turned 18, in 2000, I was off to a local parlour to embrace legal adulthood and get a small tattoo. I had drawn it myself, using elements of my zodiac sign.

My second tattoo was my first mermaid design. The motif was a larger version of a charm my father had given me. I wanted to be like that mermaid – able to live in different environments (above the sea and below it). I had moved out of home and was making my own way in a new city and attending university. 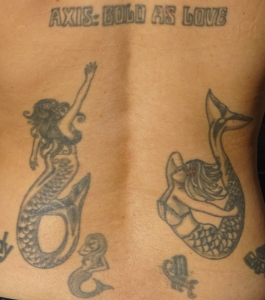 My next five designs (“Are You Experienced”; “Electric Lady”; and “Axis Bold as Love”, and two large mermaids on each side of my back) were done by a Maori tattooist, Manu Edwin. I listened to a lot of Hendrix when I was dealing with depression as an undergraduate student, especially the three albums recorded by The Experience.

Edwin shared my philosophy that tattooing is a transformative process. He would play each album loudly in the studio as he was tattooing me – just as music and singing were traditionally used to drown out the “tap-tap” of tattoos being carved into the skin with hand held tools in the Pacific region.

I find that the physical pain of being tattooed puts emotional and mental pain into perspective. I love that the raw tattoo must be cared for gently in the following weeks after the procedure, and that the result is permanent. My tattoos turn something ugly from my past into something beautiful for my present and future.

Before I describe my eighth and most recent tattoo, let’s look at four ancient cultures that tattooed their women. 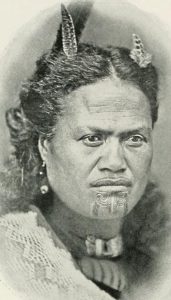 Elsdon Best was an ethnographer who gathered detailed information from the Tuhoe tribe (from the North Island of Aotearoa) in the very early 1900s. He recounts in his book, The Uhi-Maori (1904), that elite families tattooed the younger sisters prior to the tattooing of the eldest one, who was the most tapu (sacred).

The tattooing of the lips and chin of the first-born daughter of a chief was extremely tapu, and the rite was called ahi ta ngutu (sacred fire). During the tattooing, others from the tribe would surround the patient and sing specific whakatangitangi (repetitive songs) to ease the painful and highly sacred process, the song for women being the whakawai taanga ngutu.

The motifs of the tattoo would be determined by an individual’s genealogy, and the placement of tattoos on the body was significant. People without tattoos were papatea (unmarked, and thus of lower status), and to be tattooed was a sign of attractiveness and high status in the community.

Thrace of the Greco-Roman world existed in what we now call east Macedonia, southeast Bulgaria and parts of Turkey. Pictorial representations of Thracian women with tattoos appear on Greek red-figure vases such as the one pictured here, with a Thracian woman attacking Orpheus. 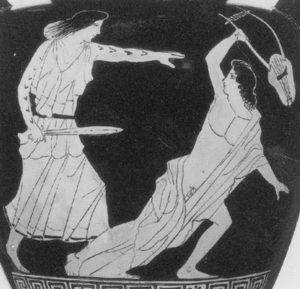 Luc Renaut, an art historian, suggests that in Thrace, tattooing added beauty, and therefore value, to women in a society where they were bought for marriage (that is, they incurred a bride price). This was in contrast to the Classical Greek and Roman systems in which the bride’s family gave payments (a dowry) to the groom’s family.

Depictions of women on Classical vases (ca. 500 BCE), show Thracian women with geometric and figurative tattoos. The tattoos reinforce the Thracian-ness of the woman in the scene. And indicate that she is not your run-of-the-mill Athenian lass who can’t stand the lyre.

Tattoos were placed on the arms, legs, ankles, chest, neck, and chin. Sometimes entire arms or legs were covered with bands of designs, row upon row.

Much older artistic (and direct) evidence of female tattooing comes from Egypt. Egyptian tattoos from the late third to early second millennium survive on female mummies and were replicated on female figurines.

A pair of Eleventh Dynasty female Egyptian mummies excavated at Deir el-Bahari is the strongest evidence that in the Middle Kingdom, Egyptian women were tattooed. 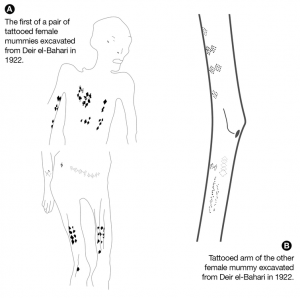 The preserved “dotted diamond” tattoo motif is clearly visible on the arm of one of the mummies. The same motif can be seen on Egyptian potency figurines from the same site and period.

The striking similarity between the painted motifs on the figurine and the preserved tattoos on the female mummy are compelling evidence that cultures that tattooed their women produced female figures with tattoos painted on their bodies.

Egyptian tattooing kits consisted of three items found in the archaeological record. These are razors, needles or pins, and small containers of dried carbon based black pigment. All of these elements of the basic tattooing kit (not just in Egypt but around the world) are multifunctional items. They could be useful for non-permanent body modification: shaping eyebrows, using black eyeliner. Needles and pins could be used to sew clothing, pop pimples, or remove splinters.

Ancient people were very resourceful, and tattooing is very basic. At the core of the procedure is pricking the skin and getting some pigment into the wound. The process of prick-tattooing by hand is reflected by the representation of the diamond pattern on both the mummified tattoo and on the potency figurine shown here.

Today the cluster of needles on an electric tattooing machine are so small that you can’t differentiate the dots: a mechanism moves the needles up and down extremely quickly. But in 2000 BCE, tattooing in Egypt was done with singular pointed implements or a few pins bound together held in the hand of the tattooist, using their wrist strength to repeatedly poke a motif into the skin.

The points may have been dipped into an ink beforehand and it is likely that afterwards the whole area would be rubbed with more ink for good measure to try and get a clear, dark final result.

The Cycladic people (ca. 3000-2000 BCE) colonised the Cycladic Islands. They were the first major Aegean civilisation to flourish in the Early Bronze Age, until the Minoans of Crete rose to prominence with their maritime prowess in the Middle Bronze Age (ca. 2000-1500 BCE). The mortuary practices of Cycladic people (burial, sometimes multiple burials) and the climatic conditions of the islands, means that there are no preserved tattooed skin remains to support my argument that their women were tattooed.

However, like their southern Mediterranean Egyptian neighbours, they produced nude female figures with geometric designs across the face and body. This is where the iconographic evidence of the “tattooed” Cycladic figurines aligns with Egyptian female tattooing evidence.

Furthermore, I have identified objects in the Cycladic archaeological repertoire which are present in the Egyptian tattooing kits – small containers of preserved pigment, obsidian blades to shave the skin, and needles and pins made of bone and metal.

These items are also useful beyond the body modification sphere too – butchering, cooking, crafting, espionage – I could go on. But my point (pun intended) is that people should include tattooing in the list of possible uses for these items.

The painted Cycladic figurines and statues that constitute my artistic evidence are probably the most well known artefacts of this culture. However, their abstract painted decoration was not fully realised until art conservator Elizabeth Hendrix’s research in the 1990s and early 2000s. Under special photographic conditions, she found faint traces of red, blue, and black pigment (sometimes noticeable with the naked eye) were revealed to be the remains of a colourful array of abstract painted motifs. These include: dots, zigzags, stripes, eyes, and possibly linear representations of the Egyptian deity, Bes.

To me, the most enigmatic Cycladic tattoo motif is the eye. Blue evil eye charms are still a potent good luck symbol in the Mediterranean and Near East. You can see it on the neck of the example shown here.

Cycladic culture was an oral one that did not create it own script and leave any written clues per se. Instead their cultural ideas are inscribed on the sculptures. I read their designs as tattoos, which identified their bearers as women who had accomplished a certain status in Cycladic society.

I chose a blue evil eye as my eighth, and most recent tattoo motif – to pay homage to the eye painted on Cycladic female sculptures. It was done by a female tattooist in Athens on my last research trip to Greece in 2014.

The power of female fertility and perils of prehistoric childbirth in ancient societies probably meant that tattoos on women conveyed certain messages. They were indicative of the passage from girlhood to womanhood, of female power and female beauty. 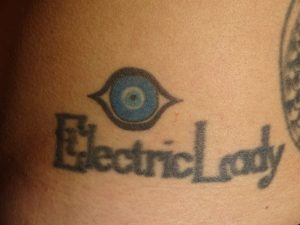 If I see my tattoos as permanent records of rites of passage and power over adversity, ancient women and their societies may have been doing the same – but with a more restricted range of motif options. The limited range of motifs would have been due to both social conventions, the skill of the tattooist, and the tools used to create the tattoo.

Next time you see a piece written about female tattooing today, I hope you will wonder at how feminism, globalisation and tattooing have taken so long to come full circle. Once again, women are now the primary recipients of this ancient, permanent body modification practice.