By Andreea Enache-Tonoiu
University of Bucharest

Historically, the relationship between psychiatry and psychotherapy has not started on a positive note and tensions have marked their development throughout the 20th century. However, the relationship has evolved significantly during recent years, with both professions acknowledging the role of each other and developing a better interdisciplinary communication. Still, there are significant divergences on who is better equipped to treat mental illness (the psychiatrist or the psychotherapist?), which therapy is more efficient (pharmacotherapy or psychotherapy?) and who should perform them (the psychiatrist only or other specialized professionals too?). At present, relational models between psychiatry and psychotherapy differ largely across countries. In this editorial, I will explore several models and review the latest scientific research with the aim of sustaining the thesis that integration is paramount for the achievement of better results in treating mental illness.

Current Definitions of Psychiatry and Psychotherapy

In the UK, the National Health System proposes the following definitions for psychiatry and psychotherapy:

Psychotherapy is conducted with individuals, groups, couples and families. Psychotherapists help people to overcome stress, emotional and relationship problems or troublesome habits. A psychotherapist may be a psychiatrist, psychologist or other mental health professional, who has had further specialist training in psychotherapy. Increasingly, there are a number of psychotherapists who do not have backgrounds in the above fields, but who have undertaken in depth training in this area.”

We can see that the UK model proposes that psychiatry takes exclusive care of mental health disorders, either by means of pharmacotherapy or psychotherapy, while psychotherapy alone is restricted to dealing with and solving specific emotional, relational or behavioral challenges.

In the US, the American Psychological Association proposes the following definitions, based on Gerrig & Zimbardo (2002):

“Psychiatrist – An individual who has obtained an M.D. degree and also has completed postdoctoral specialty training in mental and emotional disorders; a psychiatrist may prescribe medications for the treatment of psychological disorders. …

Psychotherapy – Any of a group of therapies, used to treat psychological disorders, that focus on changing faulty behaviors, thoughts, perceptions, and emotions that may be associated with specific disorders.”

At the same time, the American Psychiatric Association states that:

“Psychotherapy is a treatment that involves a relationship between a therapist and patient. It can be used to treat a broad variety of mental disorders and emotional difficulties. The goal of psychotherapy is to eliminate or control disabling or troubling symptoms so the patient can function better. Therapy can also help build a sense of well-being and healing. Problems helped by psychotherapy include difficulties in coping with daily life, the impact of trauma, medical illness, or loss, like the death of a loved one, and specific mental disorders, like depression or eating disorders. Psychiatrists and other mental health professionals can provide psychotherapy. …

Psychiatrists, psychologists, social workers, and some others may have specialized training in psychotherapy. However, only psychiatrists are also trained in medicine and are able to prescribe medications. Psychiatrists are medical doctors who are specially trained to treat individuals for a broad range of emotional and behavioral problems. They are uniquely qualified to diagnose and treat emotional difficulties because they understand the mind, brain and body and their interactions. They are trained to use psychotherapy, medications, and the two in combination.” (American Psychiatric Association, n.d.)

These definitions alone point out to the fact that internationally acknowledged institutions have not yet reached a common understanding of the role and practice of psychiatry and psychotherapy, and that these professions are still fighting for territory.

There is generally little discussion worldwide on the integration of psychiatry with psychotherapy (Imhof, Altman, & Katz, 1998) as it is not unusual for each profession to propose that it is best equipped to treat mental disorders. Many psychiatrists still disconsider psychotherapy’s benefits or consider that they are better trained to also deliver psychotherapy, while psychotherapy schools tend to focus on what they can do alone for a troubled patient. This situation is proliferated also by the fact that many psychotherapy schools to not adhere to standard classifications and definitions of mental disorders, and, therefore, they seem to contradict in a fundamental way the etiological understanding of mental illness proposed by modern psychiatry. To this, social perceptions and stereotypes add to the dissociation: psychiatry is for “lunatics”, while psychotherapy is for “normal” people. 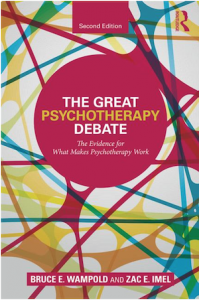 The medical model emphasizes the biological bases of behavior and pharmacological manipulation of these biological bases to achieve behavior change (Gabbard, 1994; Schatzberg, Cole, & DeBattista, 1997), while psychotherapy is rooted in and enhanced by a therapeutic alliance between therapist and client/patient that involves a bond between the psychologist and the client/patient, as well as agreement about the goals and tasks of the treatment (Cuijpers, van Straten, & Smit, 2006; Karver et al., 2006; Lambert, 2004; Norcross, 2011; Shirk & Karver, 2003; Wampold, 2007).

There is consistent research showing that the general or average effects of psychotherapy are widely accepted to be significant and large (Chorpita et al., 2011; Smith, Glass, & Miller, 1980; Wampold, 2001). These large effects of psychotherapy are quite constant across most diagnostic conditions, with variations being more influenced by general severity than by particular diagnoses. That is, variations in outcome are more heavily influenced by patient characteristics e.g., chronicity, complexity, social support, and intensity, and by clinician and context factors than by particular diagnoses or specific treatment “brands” (Beutler, 2009; Beutler & Malik, 2002; Malik & Beutler, 2002; Wampold, 2001). According to the Mayo Clinic, psychotherapy can be a useful tool in treating addictions, depression and bipolar disorder, anxiety disorders like obsessive-compulsive disorder, schizophrenia, eating disorders and personality disorders. It can also help people who don’t have a mental condition, but who are having issues with stress, sleep, sex, conflicts, life changes or anger.

Harvard psychologist Irving Kirsch, PhD, recently said in an interview that “the difference between the effect of a placebo and the effect of an antidepressant is minimal for most people.” However, a newly published “panoramic overview” of 127 meta-analyses challenges that assertion by demonstrating how psychiatric drugs, including antidepressants, are as efficacious as drugs used to treat general medical conditions (Leucht, Hierl, Kissling, & Dold, 2012). According to the research team, an effect size of 0.2 is considered significant but low, while an effect size of 0.8 or above is considered high. The median of all effect sizes was 0.40. There was a lot of variability in effect size for medical conditions, still. For example, there was a high effect size (1.39) for proton pump inhibitors to treat reflux esophagitis and a high effect size (2.27) for interferon to treat chronic hepatitis C. But many commonly used general medicine drugs, such as statins and aspirin in cardiovascular disease and stroke, had small effect sizes (0.12 for aspirin for secondary prevention of cardiovascular events and 0.15 for statins for cardiovascular events). As a generalization, the effect sizes of psychiatric drugs are right in the middle of most of the drugs used in internal medicine. Antidepressants used as “maintenance treatment” to prevent a relapse of MDD had an effect size of 0.64; antipsychotics used to prevent relapse in schizophrenia had an effect size of 0.92. Less pronounced was the effect size of 0.26 for cholinesterase inhibitors for dementia. In between were atypical antipsychotics and haloperidol, with an effect size of 0.44 for acute mania in bipolar disorder.

Therefore, we have consistent evidence that both psychotherapy and pharmacotherapy produce significant positive results in the treatment of mental illnesses. But what happens when they are put to work together?

The use of psychotropic medications (pharmacotherapy) in conjunction with psychotherapy is regarded as the standard of care for many mental health disorders (King & Anderson, 2004). And scientific research on the efficacy of dual therapy does not fall short of demonstrating that this should be a generally accepted best practice for most psychological disorders.

In many instances, multiple interventions are most effective when done conjointly, although the timing of various interventions should be adjusted in accordance with individual need (Fenton & McGlashan, 1997; Kates & Rockland, 1994). Moreover, there is evidence that a therapeutic relationship, when used in addition to drug therapy, is helpful in reducing the rehospitalization rate even in severe mental illness such as schizophrenia (Fenton & McGlashan, 1997; Hogarty et al., 1995; Kopelowicz & Liberman, 1998; Rapp, 1998). However, Fenton and McGlashan (1997) point out that psychotherapists should respect the fact that ambitious counseling interventions, when misapplied, can cause “destabilizing cognitive overload”. Conversely, individual and group therapies that utilize specific combinations of support, education, and behavior and cognitive skills training should be offered over time to improve functioning in schizophrenic patients.

This leads us to bring to attention another very recent meta-analysis (Cuijpers, Reynolds, Donker, Li, Andersson, & Beekman, 2012) which shows that although a considerable number of studies have compared medication, psychotherapy, and combined treatments, and some preliminary results are useful for deciding which treatment is best for which patient, the development of personalized treatment of depression has only just begun. From the author’s point of view, personalized medicine aims to identify which characteristics of an individual predict the outcome of a specific treatment, in order to get a better match between the individual and the treatment received. They conducted a systematic review and meta-analysis of randomized trials comparing two treatments directly in a group of patients with a specific characteristic in one of the following categories: (a) with a predefined sociodemographic characteristic, (b) a specific type of depression, (c) a comorbid mental or somatic disorder, or (d) from a specific setting (outpatients, primary care). In order to examine the 20 characteristics in the three categories of comparisons, 254 studies would be needed for having sufficient statistical power to show an effect size of g = 0.5., therefore no statistically significant results could be obtained. However, what we find particularly interesting about this study is that it goes beyond the question psychotherapy or pharmacoterapy to the more pertinent questions of psychotherapy or pharmacotherapy: Combined or not? For whom and for what?

Still, to answer these questions there is stringent need for further interdisciplinary research. Integration of psychotherapy and psychiatry should therefore also become alive in academia and research units, if we are to obtain a strong evidence base for integrated practice in the treatment of mental illness. Also, detailed questions need to be asked and be answered in order to understand what each of them is best at, when should be combined and when it is more economical for the patient (emotionally, time-wise, financially) to adopt a first-line treatment strategy of either pharmacotherapy or psychotherapy. Here we come close to the concept exposed above of personalized medicine which acknowledges that individual characteristics and illness stage and severity can be powerful mediators of both psychotherapy’s and pharmacotherapy’s results.

In the end, I would like to outline what I consider to be some pre-requisites of an efficient integration of psychiatry and psychotherapy in practice:

Andreea Enache-Tonoiu is a psychologist, founding editor of Europe’s Journal of Psychology and general director of Bellanima Medical Center, an outpatient clinic specialized in the treatment of depression, located in Bucharest, Romania. She has published “European Identity – Social Representations” in 2006 at Lumen Publishing House (ISBN: 973-7766-79-2) and “The Language of Global Brands – A content analysis” in Communication and Intercultural Management, Research Journal of the UNESCO Chair Department, University of Bucharest, 2010/No 2 (10). Andreea is currently studying at The Johns Hopkins University (online program) in the area of “Major Depression in the Population”.